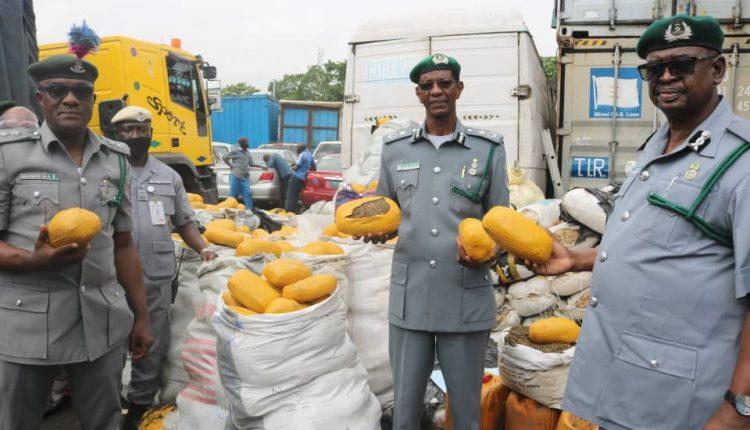 Share FacebookTwitterLinkedinWhatsAppEmailTelegram
The Federal Operations Unit (FOU), Zone A of the Nigeria Customs Service (NCS) said that it has intercepted contraband goods and raised debit notes on imports worth N17 billion between the months of January and June 2020.

The contrabands intercepted by the unit from smugglers terrorising the South Western states of the country include used vehicles, pharmaceuticals, textiles, foreign parboiled rice, tomato paste, second hand clothing among others, while the debit notes were raised on imports, which the owners under declared the value in order to pay lesser import duty.

Usman Yahaya, the Customs Area Controller of the unit, said at the weekend that contrabands seized from smugglers were worth N15.6 billion while N1.4 billion was recovered from imports of wrong classification, transfer of value and false declaration of cargoes.

According to him, the unit also intercepted a truckload of textile materials worth N565 million smuggled from Benin Republic.

He further disclosed that 18,760 bags of foreign parboiled rice smuggled into the country from Benin Republic and 64 units of exotic vehicles were intercepted and detained for duty evasion and under payment.

Yahaya however warned smugglers to embrace legitimate business as the unit was ready to send them out of illegitimate business, adding that the seizure was borne out of intelligence and hard work of eagle eye officers of the unit.

“We are always a step ahead of them through intelligence gathering and steadfastness. We won’t get tired until the Service suppressed smuggling finally from the South West,” he said.