For her, since humankind has existed, women have always been the inferior gender generally speaking. She cannot justify why scientifically, but rather sociologically. She says society over time has placed labels amongst the two genders. For men, they are: Superior masculine, the head of the house, the protector, the provider, sporty and so on, while for the women, they have been labelled as: The housewife, ‘inferior’, weak, the child bearer, emotional and all.

Saira says these labels have been derived from hundreds of years ago when these labels were probably true, and that men who still believe that any female should be bound to ancient labels are in the wrong. “I am not saying that being a housewife or the one who brings new life into the world is bad- it is a unique trait we have. But men have manipulated those terms so that women are looked down upon from a male’s perspective.” She opines.

Syed insists that women have come a very long way over the centuries and especially in the last 100 years. She can safely say that she is extremely grateful for being a woman in today’s conforming society.

Overall, for Saira, to be a woman in the 21st century is an exhilarating and exciting time as women have achieved many things over the past century. However, there is always room to grow and progress, and she along with many other young women hope to continue the true essence of feminism- achieving gender equality.

In Nigeria, we recently welcomed the appointment of three excellent women in the banking sector as Managing Directors of their respective banks last week; it is such a wonderful development in a male-dominated sector, especially given the obstacles that women face in business.

As the congratulatory messages poured in, a discussion erupted on how long it has taken for some industries to recognise the contributions of women in business, especially given that they have also put in the necessary dedication, hard work, consistency, and sacrifice. In a social media post, the new MD for Fidelity Bank, Nneka Onyeali-Ikpe congratulated her fellow CEOs Olusanya Miriam of GTBank and Yemisi Edun of First City Monument Bank Limited, while quoting Diane Mariechild, “A woman is the full circle. Within her is the power to create, nurture and transform”.

The business world may be as intimidating as it seems; certain businesses keep it simple to get to the top, while others find it harder. However, with commitment and persistence, there is always a light at the end of the tunnel.

The path for female business counterparts takes a bit longer, especially given how women are perceived in society. One of the major challenges that women in business encounter is gender bias. While most corporate leaders believe that the best candidate for the position should be hired regardless of gender, examples of women who have had better success with a male or gender-neutral name on their CV shows that unconscious bias remains.

Women must work their way up in the masculine world while facing stigma and discrimination. One of the most significant challenges that most women encounter is the ability to maintain a sense of balance in their life. The conventional perception of who a woman is and how she should be, play a significant role. Most people assume that because women are more emotional than males, they will find it difficult to strike a balance between their employment and their responsibilities as wives and mothers. This also becomes harder when the proper support system isn’t accessible.

The environment has an impact on a woman’s ability to succeed in business. Although the work environment might sometimes facilitate development and rapid success, certain nations or sectors are not designed for women to flourish. It might be due to religious or societal constraints; consider how long it took Saudi women to start driving. The welcome development has enhanced Saudi women’s lifestyles beyond simply getting from point A to point B; it has also provided them with opportunities. For instance, a woman looking to start a logistics business delivering goods to customers can now comfortably launch her business, and generally have more women in the labour market. 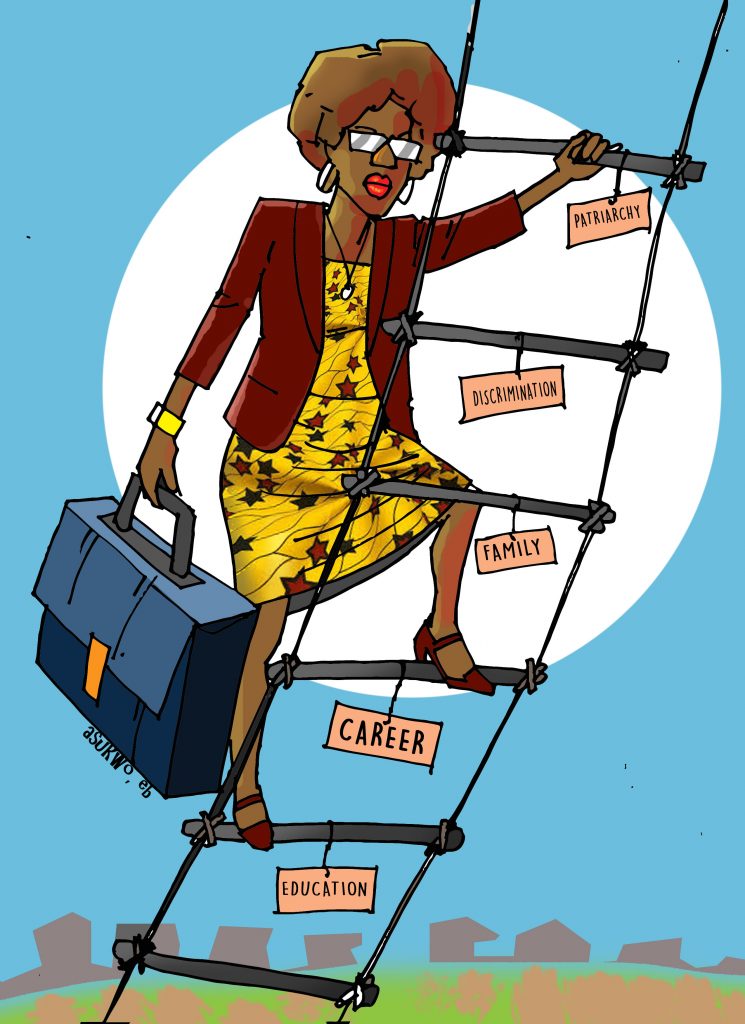 Many women lack confidence and seek support in realising their capabilities and the value they offer to businesses and organisations. There are constant reminders on social media posts from business executives and human resource managers bemoaning women’s lack of confidence in negotiating pay, particularly when it undercuts their worth and what they bring to the table.

One HR manager emphasised the need of boosting confidence constantly to continue raising up more successful women in the workforce.

Folorunsho Alakija, the vice-chairman of Famfa Oil has spoken out severally on how most people do not attribute her hard work and determination to her success rather they say she only got the access she has now because she made blouses for the former First Lady Maryam Babangida. “It was a case of discretionary allocation at the time. The President, through the NNPC, was the one that would decide who gets it. I think I was one of the first women to get the license. It’s very painful when you listen to people say that “oh! It’s because she makes blouses for Mrs Babangida or Oh! It’s because she was one of them,” she said. “How about all the others who got the license, and weren’t in the oil industry at the time that they got the license? So because they are men, they have two heads? Is it fair on womanhood? Why relegate us to the background? Why say we can’t when we can? With all the prerequisites, the boxes could be ticked” Folorunsho stated firmly.

So as we celebrate these extraordinary women today, let’s not forget the dedication, consistency, and hard work they have put in over the years to get to this point in their careers. Let’s stop pushing the narrative of cutting corners and negative stereotyping of every woman who has attained success.

In the words of Nneka Onyeali-Ikpe, the MD of Fidelity Bank, “We will redefine the financial landscape and through the force of example, encourage younger ladies to see that the impossible is the untried. This is the future we have waited for. Bring it on”.

African Ally, a subsidiary of Workforce Group, a leading HR & Business Consulting firm in Africa, committed to helping multinationals enter and succeed in the dynamic African market, has over the past 16 years, built a reputation as a trusted partner that businesses can rely on. In one of their articles, it revealed that according to a research carried out by Catalyst in 2019, the proportion of women in senior management roles globally grew to 29%, the highest number ever recorded. In 2020, this percentage remained the same but few changes occurred in 2021.

In a chat with their COO, Olutomi Rone, a colleague of theirs sought to get her thoughts on and learn more about the issues women face at work, their journeys, career paths, and the advice they’d share with others, Olutomi said “I believe that it’s essential to be yourself as a woman. You should put aside the mentality of ‘I am a woman, I’m already going to be looked down on, I need to act a certain way’ because that can affect the way you think, even before you enter any meeting, or relate to any colleague.”

She continued “The important thing is the value you can bring to the table, which is different for every individual. That’s why no organisation puts one person at the management table; there is a team, and that team is supposed to bring diversity in terms of experience, exposure, and knowledge.” Olutomi said.

Further adding that “If you are trying to make a point in a meeting and you are being interrupted in a subtle manner that is not disrupting the meeting, just ignore it and make your point. I have been in a similar situation.” Rone said.

In a report by African Development Bank Group titled: ‘Where Are The Women: Inclusive Boardrooms in Africa’s top listed companies?’, it stated that women comprise a little over half of Africa’s growing population and their contribution to the region’s economy is extensive, but they also form the majority of the poor. The report states that this is largely because they make up 70% of the informal sector, where work is unstable, poorly paid and invisible.

According to the UN’s Food and Agricultural Organisation, the African food chain exists because of women, who make up 70% of crop production, 50% of animal husbandry and 60% of marketing (“Women and Sustainable Food Security,” Sustainable Development Dimensions, UN FAO). They labour at the very farms and small businesses which they cannot own, inherit or pass on to heirs in many countries whether through existing laws or social laws to which many still adhere.

Furthermore, as the African Development Bank’s report on The State of Gender Equality in Africa underscored, opening up economic opportunities for women that would move them to formal employment would not only improve their earnings, assist families to move out of poverty but also benefit economies as a whole.

On women in corporate leadership, the report states that it would seem self-evident that while Africa is at the early economic growth stage that it is in the interest of countries, in the region to work towards greater inclusion of women as paid workers and leaders, the key to even more dynamic growth, is propelled by the addition of a motivated, oftentimes educated, labor force and untapped managerial talent.

To do so will therefore require leadership from both governments and the business community, which must keep front and center the macroeconomic benefits to each country, as well as the greater profitability of companies who are the current drivers of growth.

The report insists that this is an important mind set for both the public and private sectors to adopt, so that they see inclusion as pivotal to growing and sustaining regional success.

ARTSPLIT online auction attracts $57,000, as value of artworks grow by 14%

Nigeria’s strength should now be in non-oil export –Temidayo