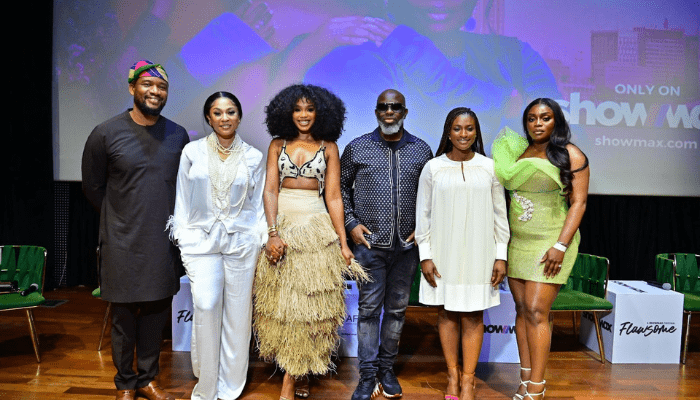 Nollywood’s finest stars gathered on November 11, 2022, at The Alliance Française of Lagos for the private screening of the first episode of Showmax’s Nigerian Original drama series, Flawsome. The screening was part of activities for the 11th Africa International Film Festival (AFRIFF).

Following the screening, director Tola Odunsi said, “I feel lost for words. I’m happy that everyone is finally seeing this beautiful work we’ve released. Women face several challenges in life, and we wanted to tell a deeper story that explored these issues.”

Speaking during the Q&A session, the leading ladies of Flawsome – Enado Odigie, Bisola Aiyeola and Sharon Ooja revealed that being on set together was the best. More than once, they discussed scenes that were so intense that they cried afterwards.

“No one has the formula to life and friendship is what keeps the women of Flawsome going. It is very important for people to have close-knit friendships from which they draw inspiration and go through life with,” said Bisola Aiyeola.

Explaining the deep bonds they share, Sharon Ooja, who plays the character Ivie, said, “Flawsome showed us that you could have amazing friendships and have a close circle that will genuinely support you without judgement. I filmed with two of my best friends, and it was amazing. Like Bisola said, having each other’s support was everything.”

Speaking about her character, Enado Odigie said, “Dolapo is very protective of the people she loves, and everyone deserves a friend like her.”

When asked what his thoughts were when he read the script, Gabriel Afolayan said, “The story was attractive and seeing that it was a Showmax Original piqued my interest as I wanted to see what the platform has to offer. I’m very impressed with the final body of work.”

Flawsome follows the lives of four women: Ifeyinwa (Bisola Aiyeola), Ramat (Ini Dima-Okojie), Ivie (Sharon Ooja) and Dolapo (Enado Odigie), as they navigate their personal and professional lives bound by the flawed yet unbreakable ties they share. They work hard, scheme, fall in and out of love and nurture dreams both big and small. As their individual circumstances shift, one thing remains constant: their loyalty to one another and their devotion to the hustle.

The first episode of Flawsome is currently streaming on Showmax, with new episodes every Thursday.