Ojude Oba: The Ijebus rally their king in age-long celebration

Clad in colorful and well-designed cloths made from ‘Aso-oke’ fabric, attention-seeking headgears, and expensive lace materials, with gold earrings, necklaces and imported handbags drawing sustained attention to their whole bodies, the women representing different ages grades or ‘Regberegbe’ in local parlance, exuded sheer glamour and opulence to the admiration of spectators.

They were marching in no particular order, but dancing harmoniously to the royal stand to pay homage to their very revered king.

The men folks were not different. From political bigwigs, captains of industries, academia, business and corporate executives and across all walks of life, they filled out in colour and in great numbers, according to their age grade, to also pay homage to their king.

The intrigue is that the jamboree, which brought the huge crowd, was amid the rain that kept the town wet throughout the day, with most female members of the different Regberegbes dancing in the rain without covering their expensive hairs or face to keep their make-up intact. There were umbrellas, but they found joy dancing in the rain like children.

The scenario orchestrated by nature made July 11, 2022 a very remarkable day for all the celebrants (sons and daughters of Ijebuland), who gathered at the Awujale Pavilion, Ijebu Ode, Ogun State, venue of the Ojude Oba Festival, to pay homage to Oba Sikiru Adetona, the Awujale and paramount ruler of Ijebuland.

The age-long homecoming and homage festival was truly exciting for all including the people, visitors and corporate organsiations that graced the occasion to felicitate with the Ijebu nation and the paramount ruler for celebrating another edition of the festival, which could not hold for two years because of Covid-19 pandemic.

So, the respite that the pandemic is over and that the people can now celebrate once again drew the highest crowd in the history of the festival, with all the sections of the pavilion filled, and outflows across the adjoining streets to the venue.

If there was one person that is most grateful to God for the festival, it is Oba Adetona, the Awujale, for seeing another festival after two years hiatus and for also celebrating his 62nd year of ascending the throne, making him the longest reigning king in Nigeria today. 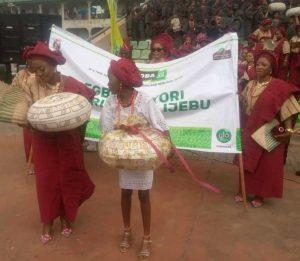 But the age grades seem happier on the return of the festival this year, which was aptly themed, “The Return of Ojude Oba”.

The Ijebu tradition holds the age grade system in high esteem because it is a tool for preserving the values and promotion of industriousness and self-esteem among Ijebu people.

So, their showcase of opulence, glamour and reverence to the paramount ruler at the festival this year was expected.

Apart from the age grades (Regberegbes), the Ijebu warriors or rather (Baloguns) were forces to reckon with at the festival. Their grand entrance on well-decorated horses amid war gear spoke volumes of their importance to the protection and existence of Ijebuland, even now.

From families to clans, the Baloguns and their entourage came chanting war dances, displaying traditional war acrobatics and performance and even shooting their den guns. Despite the level of insecurity in the country, the sound of the shootings did not scare people but wooed cheerful admiration from them.

Read also: Eidr-el-Kabir: Reflect on mood of the nation as you celebrate, Olubadan charges Muslims

The corporate sponsors also had time to dance from their stands to pay homage to the Oba. Globacom and First City Monument Bank (FCMB), and other companies founded by Ijebu sons, led the corporate parade.

Away from the raw excitement from the Regberegbes and Baloguns, pulsating beats from the live band stand kept the crowd cheering.

The Apala singer, who toed the lines of Haruna Ishola, his father and pioneer of the Apala music genre, kept switching from entertaining the crowd to informing them when a big masquerade arrived and the festival had enough of the big masquerades.

Top among them is Babajide Sanwo-Olu, governor of Lagos State, who was the special guest of honour at the festival, while Dapo Abiodun, governor of Ogun State, the host governor, was also on ground.

In their goodwill messages, both governors commended the paramount ruler for the leadership roles he has been playing in Ijebuland and across the state for 62 years and running.

They also expressed their joy over the return of the festival, which they described as a crowd puller amid huge tourism and culture potential to harness for economic benefit of the people and state.

Speaking in his goodwill message as a son of Ijebuland and corporate sponsor, Ladi Balogun, group chief executive, First City Monument Bank (FCMB) Plc, attested to the rich cultural heritage of Ijebu people, and need to preserve it, hence the corporate support for the festivals for many years now.

“For almost two decades now FCMB has been a major supporter of the Ojude Oba Festival and it has been a mutually beneficial journey. As a purpose beyond profit corporation, we understand that culture is an essential component of sustainable development. It is an important factor in building social inclusion, eradicating poverty and stimulating progress.’’

However, the festival in many years now always has the colorful presence and support of Subomi Balogun, the founder, FCMB Group.

Otunba Balogun, who is the head of the princes in Ijebuland and leader of Christians in Ijebuland, noted that Ojude Oba is embraced by all Ijebu people despite the religion or social background because of its unifying factor, cultural and heritage promotion and even economic gains it brings to the land and the people during each celebration.

In his tradition of hosting the media after the festival in his expansive and expensive home country mansion, Balogun, whose great grand maternal father, Oba Adesimbo Tunwase, was the 47th Awujale of Ijebu Ode, said his support for Ojude Oba is beyond the one-day jamboree as he has sustained concrete efforts at preserving Ijebu by building the Tunwase Museum where people can have the history of the Ijebus from the reign of his ancestors.

Bringing the essence of Ojude Oba to his business, the 88 years old retired banker and business mogul disclosed that the FCMB logo and the horse emblem are derived from that cultural heritage.

He noted further that as an institution, FCMB is proud to support Ojude Oba, the heritage of the people, which has gone global and will continue to do so because the people also have supported the bank.

In line with the recommendation of Wahab Osinusi, chairman, Ojude Oba Festival Planning Committee, who in his appreciation speech earlier to the royals, sponsors and the crowd called for moderation, there was moderation in the celebration as no casualty of any form was recorded; the Ijebus hosted the world in a very peaceful manner will urging them to visit again.

Meanwhile, as in previous editions, the economy of the town was impacted hugely as food vendors, car hire services, hawkers, among others smiled to the bank from the brisk business the festival brought to their doorstep.