Goodnight Victor Olaiya, the last of the originals 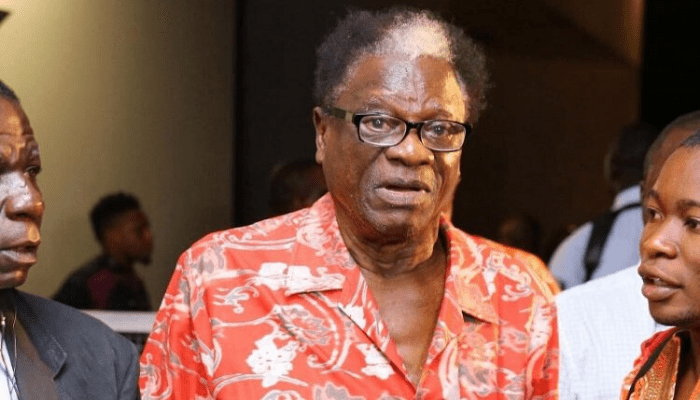 In February 2017, lovers of highlife music were sad when Victor Olaiya, the legendary highlife music maestro announced his retirement from the music scene, which he impacted greatly for six decades.

The retirement, according to him, was due to his failing health and doctor’s instruction to desist from performances. Since then, the highlife legend had missed the weekly performances at the Stadium Hotel, Iyun Street, Surulere, Lagos.

As well, Gbenga Adewusi, his manager, confirmed Olaiya’s regular absence then, saying, “Aside from attending his gigs, he no longer comes to work regularly as a result of age-related health issues.”

But his fans truly missed his performances at Stadium Hotel, which he built as a base for his music and support for upcoming musicians. During his heyday, it was most exciting watching him blow his trumpet and sing his heart out at his own celebrated Stadium Hotel.

Today, not only his fans, music lovers and Nigerians at large are going to miss him as the legendary musician is died.

Olaiya died on Wednesday, February 12, 2020, at the Lagos University Teaching Hospital after a brief illness.

Born Victor Abimbola Olaiya on December 31, 1930, Olaiya, who died at 89 years, is one of the pioneers of the Nigerian highlife music with six decades of a successful career to his credit. Before his death, he was Nigeria’s leading star of highlife’s golden years of the 50 s and early ’60s.

He was one of Nigeria’s brightest musical stars, with a career that included performing at the state ball during Nigeria’s independence in 1960, in the presence of Tafawa Balewa, Nnamdi Azikiwe and Sir James Robertson, the governor general and representative of the Queen, among other dignitaries. He also performed at the state ball three years later when Nigeria became a republic.

Trailing his journey in the music world, Olaiya toed the line of the likes of Fela Anikulapo Kuti who followed their passion against their parents’ wishes and society expectations.

In 1951, he was accepted by Howard University in the United States of America to study Civil Engineering, instead, he pursued a career as a musician, to the disapproval of his parents.

But if his parents were keen observers, they would have recognised his passion earlier because at an early age he learned to play the Bombardon and the French Horn.

He played with the Sammy Akpabot Band, he was the leader and trumpeter for the Old Lagos City Orchestra and joined the Bobby Benson Jam Session Orchestra. In 1954, he formed Cool Cats, his own band, which he renamed All Stars Band when they played at the 1963 International Jazz Festival in Czechoslovakia.

His music was influenced by the horns and harmonies of James Brown. Over the course of his career, he released an album with the E T Mensah, shared a stage with Louis Armstrong, and impacted the styles of Fela Kuti and Tony Allen.

Olaiya, who is both singer and trumpeter, was famous for hit songs and albums such as ‘Baby Jowo’, ‘Feso J’aiye’, ‘Ilu Le O’ and ‘Taxi Driver’.

The new generation of highlife lovers connected with him in July 2013, when Olaiya released a music video remix of Baby Jowo (Baby Mi Da) with 2Baba (Innocent Idibia) and was received with much acclaim.

Explaining love for highlife and outlook for the music genre, in an interview with the Vanguard Newspaper in 2014, Olaiya said, “High life has a great future because for it I live, for it, I shall die. There is no gainsaying everybody wants to talk about high life. Highlife is the lingua franca of this nation. Fuji, reggae, afrobeat, juju, all of them had to borrow a leaf or two from highlife to enable them to stand. So, it still remains the lingua franca of this nation and no type of music can threaten the existence of highlife music.”

As well, many in his heyday attested to his creative ingenuity, great stage performance and mastering of his craft. One of his great reviews was from Alade Odunewu of the Daily Times who styled him the ‘Evil Genius of Highlife’.

“They thought I moved highlife music out of the ordinary. Then, it was believed that my Highlife was a little bit out of this world, beyond explanation. This was why Alhaji Alade Odunewu of the Daily Times styled me the Evil Genius of Highlife”, Olaiya said some years back while alive.

Moreover, most fans love Olaiya’s music because the tracks were enriched with educative lyrics and beats that make you move gently. They will continue to appreciate his evergreen music.  In his condolence message, Atiku Abubakar, the presidential candidate of the People’s Democratic Party (PDP) and a fan of Olaiya, commended his sheer creativity and evergreen deliveries.

“My condolences to the family of Nigeria’s highlife legend, Sir Victor Olaiya, OON. His artful delivery on the trumpet and his hits from the 50s are moments we’d never forget. Most recently, the duet with @official2baba was a musical bridge to travel. May his soul Rest In Peace”, Atiku said on his twitter handle – @atiku.

It is sad and a reality that the Nigerian music industry has lost one of the best, and probably the last from his time. Goodnight Victor Olaiya!

“We Believe Education Is The Bedrock For Any Development” – Folashade Jaji