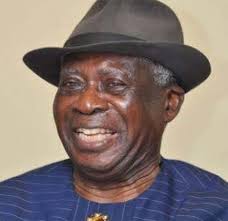 The rumoured death of the former World Court judge and Supreme Court Justice, Adolphus Godwin Karibi-Whyte, seems to be confirmed by top condolence messages from the likes of Dakuku Peterside and Magnus Abe.

Rumours of the death broke Friday evening but absence of a statement from the family or the Rivers State government led to caution in the mainstream media.

A family source had by Saturday afternoon quoted the son Dagogo, a lagos-based lawyer, to have admitted the death of the retired Supreme Court Justice and erudite professor of Law at the age of 88. The source stated that the retired Justice died in a Port Harcourt, Rivers State hospital following a heart failure.

The deceased hailed from Abonnema in Rivers State. Quoting a citation posted on the Hallmarks of Labour Foundation website, the source said the Justice passed through the Nigerian and international judicial systems. “Appointed legal draftsman in the Rivers State Ministry of Justice in 1973, the legal luminary successively attained the ranks of Solicitor-General, in that Ministry and Associate Professor of Law, University of Lagos. In 1976, he was appointed a Judge of the Federal Revenue Court and thus began an illustrious judicial career, which took him through the Court of Appeal from 1980, and the Supreme Court of Nigeria from 1984, thus making him the second Nigerian after Dr. T.O. Elias, to move directly from academia to the judiciary.

“During this time he also served as chairman of several commissions of inquiry including the Counterfeit Tribunal and the Inquiry into the Nigerian Agricultural and Co-operative Bank. He was also appointed as Judge, International Criminal Tribunal on November 7, 1993, and Chairman Nigerian Constitutional Conference between 1994/95.”

Reacting, the immediate past Director-General of the Nigerian Maritime Administration and Safety Agency (NIMASA), Dakuku Peterside, described the death as a huge loss to the legal profession, Nigeria and Rivers State in particular. He described the late Justice as one of the finest jurists of his generation, who brought tact, discipline, and sound judgments to the legal profession.

“Late Justice Adolphus Karibi-Whyte was a complete gentleman and an intellectual to the core, he was never found wanting throughout his time in the judiciary and represented one of the best of his generation.

Another top leader in the state, Magnus Abe, former senator, averred that the loss of this great and capable mind at a time of grave crisis in the world when his wisdom, wealth of experience and calm fatherly disposition would have been invaluable to our country is painful indeed.

Former senator representative of the Rivers South-East Senatorial District at the National Assembly condoled the Judiciary in Nigeria and the Whyte family over the death of former Supreme Court Judge.

He described the late legal icon as an accomplished lawyer, teacher, a man of character and proven integrity whose immense contribution to the development of the Judiciary in Nigeria can never be forgotten. “Justice Adolphus Karibi Whyte meant different things to different people, to me, he was a father, a friend, and a counselor. I was mesmerized by his passion and commitment to Justice.