Leaving the tarmac; buying a bank in Africa by Aigboje Aig-Imoukhuede is a story in risk taking, enterprenuership, genuine business partnership, strategic international alliance and passion for a professional career in banking.

The book highlighted the issues encountered during the bank’s mergers and acquisitions processes in Nigeria and some of the banks acquisition in Africa. It also situated the growth of Access Bank in the complex process of growth and strategies to manage each challenge as they occur.

Written in simple language, explains the dynamics of Access Bank growth under his watch as the Group Managing Director.

Armed with a Law degree from University of Benin and after a year stint at Continental Merchant Bank as a legal officer, which he started in 1988, Aigboje Aig-Imoukhuede moved to Prime Merchant Bank.

Some professionals who were at Continental Merchant Bank left to set up Prime Merchant Bank. He was called upon to join the bank.

Aigboje was inspired by the zeal and success story of Otunba Subomi Balogun who is the first Nigerian to promote a bank without government or foreign support.

Subomi Balogun, in 1979, applied for a merchant banking license to establish First City Merchant Bank. Otunba Balogun on his part was inspired by the pedigree and entrepreneurial drive of London-based investment banker, Sir Siegmund George Warburg, who co-founded S.G. Warburg. He visited Warburg in London prior to establishing his merchant bank. Sir Warburg passed away in October 1982 while Otunba moved on with the operations of his new bank in 1983.

Balogun started a new model of owner managed bank in contrast to the government owned banks at the time.

As he was nursing the idea of acquiring a bank in year 2000, he needed a partner and he found one in Herbert Wigwe and this formed “four eyes“ of leadership instead of two according to Aig on his choice of a business partner.

The fragile Nigerian economy had some 140 commercial and merchant banks in business in 1991.

This was in response to the economic liberalisation policy of the General Ibrahim Babangida regime.

Two banking ownership models held sway then. It was either the bank was promoted by some godfathers and a professional Managing Director would be hired to drive the growth or some professionals obtained the banking licence and manage it themselves.

While formal was easier to promote because of funding, the end results are usually not healthy. Aigboje opted for the second model. The owner-manager.

“The owner/managers were insulated from the need to depend on a godfather, free to express their entrepreneurial and managerial visions and they then worked hard to bring them to function,” he mentioned in his book.

Access Bank Group is a commercial bank with leveraged buyout, private equity, mergers and acquisitions themed “Expansion Drive.” This has played out severally in their growth strategy locally and internationally from year 2002 till date.

A lover of books, Aigboje was partly influenced by the classic work of Rick Rickersten and Robert Gunther.Aig had read the book and internalised the outlines enumerated by the authors.

Rickersten had identified key stages of a standard Management Buy Out. These stages were equally separated and treated in each chapter. They are as follows: have a dream and be bold, find or create an opportunity, develop a business plan, strike an agreement with the seller and make a deal with the equity investor, arrange bank financing, compete due diligence and close the deal. Build the company and exit, then take the money and do it again.

Released in March 2001, titled: Buy out; the insider’s guide to building your company. Rickersten’s book is a standard text for Private Equity practitioners, globally. Coincidentally, the acquisition of Access Bank was made 12 months after the official of Rickerstens Buy Out.

Andrew Grove was at a time president at Intel. In his book, Grove advocated that a leader must be restless and constantly paranoid.

“When strategic inflection point hits, ordinary rules of business go out of the window,” he noted.

In the late 90s, Access Bank Plc like most banks operating in Nigerian financial market then had regulatory challenges. The Central Bank of Nigeria (CBN) had initiated an investigation with respect to foreign exchange infractions. This affected their operations, customers’ perception and morale to do more business. 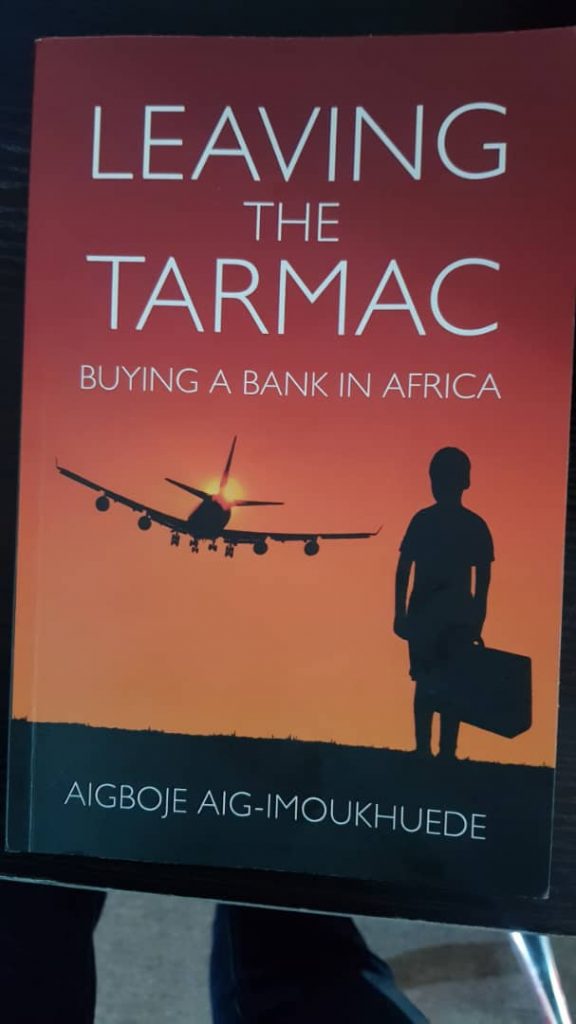 The offer for subscription was grossly under-subscribed as the deadline of the offer beckoned. This was a major issue for the advisers, promoters, board and management of Access Bank Plc; this unfortunate development on the side of the bank provided a golden opportunity for Aigboje and Herbert Wigwe to strike.

With the assistance of the frontline investment banker, deceased Albert Okumagba, they charted a course, defined strategy and mopped up the unsubscribed shares.

The acquisition and approval from regulatory body were easy; the complex part was driving the business and presenting a unique value proposition to customers already being serviced by leading banks.

Chapter Four is the most interesting aspect of the book because it explained a unique market entry strategy deployed by Aig and Herbert, given the banks limited resources at its embryonic acquisition.

Value Chain model in banking reviews the entire production and distribution chains from source of materials to consumers business mechanism. It identifies the gaps and proffers solutions on how to either improve revenue or reduce cost drastically. It required a detailed thought process and seamless execution. Not many banks want to ply that route then.

Running a forward-looking bank with clearly defined growth paths needs human resource that will buy into the vision. This led to the idea of operating the most advance training school ever in the history of Nigerian banks.

Chapter Seven narrates the rationale behind Access School of Banking Excellence. A four-month training programme, it is also a mini MBA module with local and foreign faculty selected from the best schools around. The MBA module has some of the banks policies and credit focus embedded in it.

The Pan African Expansion of Access Bank Group birthed in The Gambia in 2006 as the first subsidiary to open shop, soon Sierra Leone, Zambia and Rwanda in quick succession.

Chapter 13 is basically on international expansion. The high point of this chapter is the experience encountered with the acquisition of Omini Finance in Cote d’ivoire in year 2008.

From 2008 to 2013 when the bank exited, Access Bank’s presence in Cote d’ivoire was characterised with regulatory challenges, staff’s connivance and poor performance, serious efforts were made to revive the bank but it was grossly resisted. “We experienced firsthand problems that cultural differences can cause a business and I must say I am yet to fully understand the logic behind Cote d’ivoire’s law,” Aig mentioned.

Banking regulation in French-speaking West African countries can be tasking while the labour law/country employment terms of engagement are highly staff-protective, especially when such senior professionals work under the Contrat a duree indeterminee; permanent contract (CDI) terms.

The complex regulatory structure and composition coupled with country specific laws contributed in no small measure to the bank’s exit.

A major local acquisition that tested Aig’s leadership capacity is the Intercontinental Bank. The transaction attracted big attention. Chapter fourteen is dedicated to the entire activity. Intercontinental Bank merged in 2005 with three other banks where it shared similar shareholders. They are Equity Bank, Global Bank and Gateway Bank. The post-merger integration was not a smooth sail despite initial similarities communicated or assumed to the outside world.

Acquiring banks to scale their growth was the easier part for Access Bank, integrating people to align with processes, culture and policies is the most complex aspect of mergers.

Integration cost and its consequences partly account for the major reasons many banks shy away from mergers and acquisition. The Intercontinental Bank merger with three other banks in 2005 still continues to play some negative developments until 2012.

“To accommodate its different 2005 merger partners, Intercontinental Bank adopted a decentralised approach of decision making, which exposed the bank to significant operational risks. Its operations were quite inefficient and uncompetitive,’’ the book states.

Chapter eleven and twelve practically concentrated on governance structures deployed by the bank, qualities they look out for when appointing directors, risk management strategies and the bank’s numerous executions in sustainability and responsible banking practices.

The author did not mention the promoters who contributed the balance eight hundred million naira (N800,000,000)(USD7,300,000) for the purchase of Access Bank shares on offer in year 2001. 20 percent of the required amount was raised by Aig and Herbert, but who are the individuals, family, friends and investors who raised the balance 80 percent of the required amount?

The investors and promoters of Access Bank are at liberty to disclose or not to disclose.

The book is recommended for business owners, entrepreneurs and top executives who are at various stages of their career.

It is a must read for businesses thinking of regional expansion in Africa especially in French speaking West African countries.

The book will be valuable for consultants who train management on strategy and market entry models and those who facilitates sessions on company retreats and year end panning period.

Above all, the book will be ideal for specific Africa themed business cases especially for the popular Harvard Business School course: Doing Business in Africa and the Lagos Business School adaptation of same.

About the Reviewer: Augustine Isioma Iwelu

Augustine is the CEO of ZDMS Advisory. ZDMS is an economics consulting and Strategy firm in Lagos. Augustine has qualifications in Economics, Managerial Psychology and Corporate Governance and has consulted widely for financial service companies.

Buga becomes the most shazamed song in the world

Explainer: How number of delegates each state gets is decided