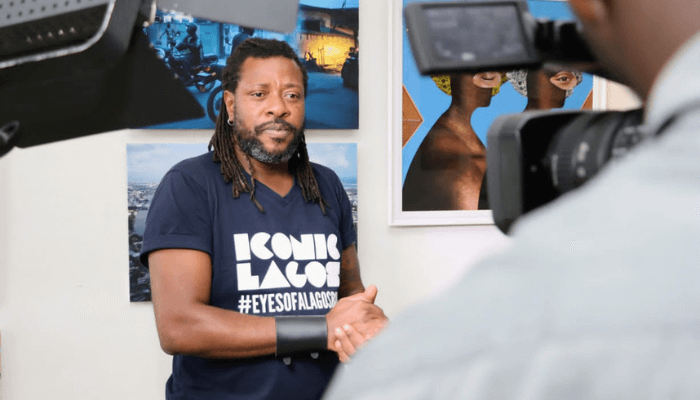 From his experience as a photographer whose lens, over the years, has been capturing exotic sceneries of Lagos, Bolaji Alonge is privileged to be the only guest photography exhibitor at ArtMiabo International Art Festival (AMIAF 2023). Led by Miabo Enyadike, artist and gallerist, the festival, which holds from March 27-May 1, 2023 at Ebonylife Place, Victoria Island, Lagos, according to Alonge, celebrates the link between Afro-pop art and Afrobeats music genre.

As a photographer, Alonge travels widely, documenting diverse culture and history. However, Lagos has featured in his themes more prominently, which has given him a crucial spot as guest artist in AMIAF 2023. Being curated by Lagos-based multidisciplinary artist, Yusuf Durodola, AMIAF 2023 will be exhibiting about 30 artists from Africa and globally.

Apart from Alonge’s many solo exhibitions in Lagos, in the last few years, his photography has taken roots in the city. He is known in the Lagos art parlance as ‘Eye of A Lagos Boy’, a toga he earned from the theme of one of his early shows.

Alonge had a collaborative show themed ‘Iconic Lagos’ in 2022, and has been a part of the Lagos Fringe Festival in the last three years. Other works of his include the Iwaya Community Arts Biennial (ICAB), iDESIGN affordable art fair and Quintessence Gallery shows since 2019.

The photo artist whose works, over the years, have shown rare landscapes of cities and rural settings across Nigeria is participating in the second edition of AMIAF for the first time, but the festival is not exactly new to him. He disclosed that he has been tracking the career of the founder, Enyadike, almost a decade ago. That interest, he said, led him to the 2022 edition of AMIAF as a visitor. “I attended the AMIAF 2022 edition and was truly inspired,” as an observer.

The presentations of the exhibits, he recalled, were inspiring. “Both the curatorial approach, selection of artists, production and promotion of the festival were impressive and impactful,” Alonge explained. “It was a huge honor late last year to receive a call from Miabo to be a guest artist in the upcoming 2023 edition.”

With Art of afrobeats as the theme of AMIAF 2023, Alonge, who claimed that his work is going through a “revolution” also enthused that the festival is a perfect platform for his photography.

“AMIAF 2023 is an excellent platform to showcase my work, which is currently going through a revolution. Pop Art and particularly our own brand – ‘Afro-pop Art’ is taking the forefront.” He cited how his last exhibition, Iconic Lagos, a multimedia show, offered a platform to 21 other artists, showing what the city meant to them through their arts.

On the link between photography and Afrobeat music, Alonge noted that “Afropop art and afrobeat go together. He emphasized that “to enjoy visual arts with our music is definitely a match made in heaven.”

AMIAF 2023 is, though, basically, a visual art festival, the Afrobeat flavour is expected to spice the event. Alonge hinted on the contents of his works as a guest artist: “At AMIAF 2023 we will showcase three sets of works, photography and mixed media that depict Afrobeat in all its glory.”

Alonge was born in Lagos, where his father passed on to him a passion in photography, spending time with him taking and developing images as a child. He studied Mass Communication at the University of Lagos in the 1990s, while exploring his acting skills at the famous Theatre 15 UNILAG.

Alonge’s bio describes him as a great storyteller who loves to share his photography and the deeper meaning of the stunning images he presents. “I encourage young Africans to take up the camera and document history – those memories that make up the fabric of existence. In order to move forward we have to know where we come from. I do it by searching for unique shots that

become integrated in the mood boards of our lives”.
In his career, he recalled how photography was a mere hobby, “but now it’s a full-time job.”