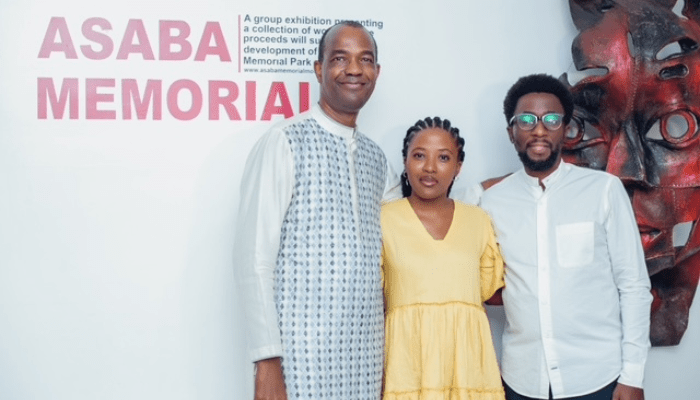 In October 1967, four months into the civil war, Nigerian Federal troops entered the small town of Asaba killing over 1000 civilians in what is now known as the infamous “Asaba Massacre”. 55 years later, on November 27, 2022, the first major art exhibition curated by Otsholeng Poo, and convened by Chuck Nduka-Eze, the Isama Ajie of Asaba, is open in Lagos to institute a memorial park in honour of the victims of the tragic event.

The Asaba Memorial, produced by A Whitespace Creative Agency is a selection of work by Nigerian artists that provokes awareness and recognition of the tragic event in Nigeria’s history and aims to support the development of the Asaba Memorial Park – a cultural monument in honour of the victims of the Asaba massacre. The exhibition on view through December 7th is held at the Red Door Gallery, 51 Bishop Oluwole Street, Victoria Island, Lagos.

The exhibition features works from over 20 artists, including “In Memoriam”, a monumental canvas piece with the names of some of the victims by Kanye Okeke, a 12-year-old artist who created this work for this show and Victor Ehikhamanor’s Black Peace (2022), part of the series which was featured as the book cover of Elizabeth Bird and Fraser Ottanelli book titled “The Asaba Massacre: Trauma, Memory, and the Nigerian Civil War”.

Also on view is a body of work donated by Enotie Ogbebor, the son of a senior military officer in the Nigerian army who provided an eye-witness account of the atrocities that occurred in Asaba and renowned fashion designer Ade Bakare’s “Ogbueshi – a Guipure cotton lace with red paint and soil that depicts the fate of Chief Mariam Babangida’s father – Late Ogbueshi Leonard Nwanonyei Okogwu, who was to give the welcome address to the soldiers on behalf of the Asaba community on that fateful day. In addition, Ben Enwonwu’s 1967 painting about the Civil War, War Dreams and Ben Onobrakpeya’s 1972 painting, Ayo Players, are among the collection’s oldest works.

Otsholeng Poo, the curator of the event said, “As a South African who calls Nigeria home, I understand the importance of this exhibition on a very personal level. I am inspired by the people of Asaba’s continued survival and resounding call for the Massacre to be given its proper place in the telling of Nigeria’s history. I’m also hopeful that as this project gains supporters from across the continent and the world, we can keep telling the story of Asaba through art and community”.

She also added that as the exhibition travels across locations, the committee intends to invite more artists’ contributions and keep expanding the Park’s art collection.

Speaking about the event, Chief Nduka-Eze explained the importance of using art as a powerful catalyst for bringing awareness to important issues that receive only marginal attention. “To date, there has been no proper explanation or official apology from the Federal Government of Nigeria for the humanitarian crime. We encourage everyone to come and explore the exhibition. It will challenge people not only to ask, ‘what could have been done?’ but also, ‘what can we do?”

Nduka-Eze claims that this is the first step to creating a memorial site that is accessible and dignified in its representation to honour the victims, as well as a place that will be a community symbol of all the lives lost and extend to encompass a cultural and recreational attraction for both local and international tourists.

The exhibition offers an insight into the Asaba massacre of 1967 as it covers the emotional complexities of a forgotten peaceful community with compelling stories on the trajectory of the horror and the growing realisation of the extent of the massacre during the Nigerian civil war. As part of the memorial project, the Memorial Park will have, as its foundation, 1,000 trees as a symbol of all the lives lost.

Elizabeth Bird and Fraser Ottanelli, authors of the book on the Asaba Massacre published by the Cambridge University Press UK said: “This new initiative will take the memorial process to a new level, bringing visibility throughout the nation and the continent. This new visibility gives hope that Asaba will finally see an official acknowledgement of responsibility for its suffering. But above it, this spectacular memorial will honour those who died, ensuring they will not be forgotten and leading the way to a better future.”

Ibrahim Pam, Head of GCF’s United Nations Independent Integrity Unit, in a blog post, sees the project as a promotion of national reconciliation that is anchored on an honest discussion of historical grievance, that leads to acknowledgement and recompense, and promotes genuine appeasement and national unity.

Jon Silverman, Professor of Media and Criminal Justice, University of Bedfordshire & Former Home Affairs Correspondent BBC calls the project a simple necessity: to leave a permanent physical record of the inhumanity and for future generations to reflect on and ensure the event is never repeated.