A day in the life of an artist 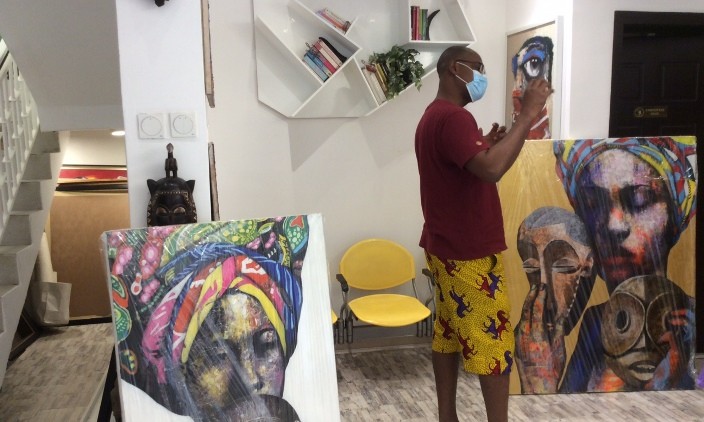 A colleague once asked me, “What do artists do all day”?

In answering the question, I decide to follow an artist of great repute, with a very busy studio schedule, personal interests and family life to attend to.

Of course, Chika Idu, a contemporary Nigerian artist, is worth following all day for many reasons. His strongly figurative and personal style, which is easily recognizable, also traces his trajectory and stylistic development. His technique involves the exhaustive priming of his canvas, while his broad oeuvre embraces themes such as social justice for women and children.

Commonplace in his studio, at Crown Estate, Sangotedo, Lekki-Ajah, Lagos, are works characterised by heavy texture and hazy rendition technique, which he calls ‘light against visual distortion’.

At about 5am on Saturday, February 20, 2021, Chika Idu, who is an early riser, is already awake to commence his morning rituals, which include praying, exchanges with his family, morning exercise to keep fit, breakfast and then hoping for the right mood to work in his studio.

On my part, by 6am I am already set for the all-day visit. It is a long drive from Ajao Estate, Isolo, where I live, to Crown Estate, Sangotedo, along the Lekki-Ajah Expressway, where Chika Idu lives and hosts a studio.

As expected, the notorious Lagos traffic, even on weekends, delays the trip. While on transit, there are exchanges between Idu and I on the state of the trip.

While still waiting for my arrival, he continues with his daily activities, including seeing his mother off following a visit to his place.

I missed seeing her, because she seems a big inspiration for Chika, going by the way he talks about her.

At a point that morning, Chika needs to attend to an emergency. He is called to bring two of his paintings to Sachs Gallery in Lekki Phase 1, Lagos, but I am already close by.

So, we meet at the entrance of his estate, where I drop my car and enter his for the delivery of the works in Lekki Phase 1.

The drive is smooth, despite pockets of the usual Lagos traffic. While driving, he keeps talking about his work and why he prefers to deal with galleries, especially Sachs, which seems one of his favourites.

“I paint to share an experience or message with the world, so it should be out there. That is why I deal with galleries because they are meeting points for people with like minds”, he explains while driving to Sachs Gallery.

“If I put this painting outside my house, it will not be stolen and I will pick it up tomorrow morning because the people around do not know the value, but if you put it in around a gallery, someone will see it and ask why a painting is kept outside,” he said. “That is why I deal with galleries, so that more people can see it. If I keep it in my house, I am denying the world what they should see and have.”

We arrive at Sachs Gallery early afternoon and the welcome by Bernadette Umeri-Mjalli, the founder and CEO, is warm enough to tell how she admires Chika and his works.

You cannot miss the indulging fragrance, beautiful works and display of artistic opulence at the gallery. These are the charms Umeri-Mjalli employs to woo and sustain growing patrons.

As Chika drops the two works and we set to leave, I chip in a question, why are you collecting Chika’s works?

“Oh, my brother, they are in high demand. I have been dealing with him over a decade and his creative ingenuity has always been intriguing, and even more now”, she confesses.

As we enter the car and Chika engages the gear, he starts speaking again on his work and in the long run I deduce why his works are sought-after by galleries and private collectors.

It is not all talks, but laughs and refreshment as we drive to his home. His joviality indulges you to listen to him more as he speaks facts and from his experience spanning over two decades in art business, art education, art advocacy and successful studio practice.

On getting back, the gate of the estate opens to reveal serenity away from the madness and chaos of Lagos. His house is truly home and I guess that influences his creative ingenuity, but he says not really as he packed into the estate recently.

At home, I witness a very warm welcome from his lovely family. But I did not take long to notice some enthralling works in the sitting room; I almost mistake the space for his studio.

“When I finished these works I looked at them and said I think they are done, but I am still looking at them. I am not done with them yet”, he says after introducing me to his family and ushering me later to his studio, which I long to see.

“This studio is smaller than my first studio at Ikorodu, Lagos, where I used to live. That one was purposely built and it offered me big space to work”, he says.

In his generosity, he offers me light refreshment, peanut and wine, though courtesy of his wife, which we enjoy together. My visit is exceptional as he does not allow studio visits and also does not allow disturbance from family while working in the studio; so I help in breaking some rules.

While munching and drinking, I see him go back to a painting, which he has not titled yet.

“Well, it is just the idea of “who goes in first”. It is not the title of the work, I am usually lazy to title”, he says. “It is the idea of children being conscious of the weather and the temperature of the water; they were by the water waiting for who to go in first”.

As he works, I marvel as he picks his knife to paint. Knife! I exclaim, forgetting that noise is not allowed.

Yes, Chika paints with a knife. “I paint with a knife because of the effect I am looking for, a brush gives you a flat finish, but with the knife, I can create some textures and roughness that I feel is what I want”, he says while painting.

He insists that painting with a knife is more expressive, than a brush, which is more controlled and smoother.

Confused on why he is still painting a work I see as finished, I ask why.

He says, while still concentrating on the work, “There are things I need to correct. I won’t say I had done so much on it, or I have spent so much time on it, at any stage, I will effect corrections if I see need for that even if I am in the house of someone that wants to buy it”.

“The water in the painting needs some work. There is a leg I need to correct here, I have corrected this young man’s, then I need to work on the water and introduce some other colours into the work to give it more depth”, he says.

Moments later, he drops the yet unfinished painting and hangs a second one on a larger platform, and starts work. I did not ask why he leaves the first work, I guess he is done with it at the moment.

“In this work, I need to add colours around and I have just seen again that I need to add a little bit of flesh on this leg and it goes on like this. It is like a continuous communication with the work”, he says while doing the needful.

But I discover that he keeps talking and it is against his studio rules. He keeps the dialogue in order not to forget me; his guest.

It surprises me when he says he started the first painting around April 2020, yet he is not sure when to finish it.

“That is how long all the paintings take to finish, it is not unusual, and there is no time for finishing it, I can leave it for another one year and get stuck”, he explains.

Pointing at the painting of a woman with a butterfly in the studio, he says, “That painting was done two years ago, but it is not finished. Recently, I have been asking myself, why is this painting not finished”.

In my surprise, I ask when he feels a work is done. “There is no way to say it; and you never know. You can finish a painting and you hear a voice that says it is done”.

At about 5pm, when his hands were off the painting knife, he narrates the story of the water background in his works, which started about six years ago when he took his first boat from Mayegun in Ikorodu to Victoria Island. It is a story worth hearing, but that is for another day.

While narrating the story and I prepare to end the visit, my eyes probe many works carefully packed in the small studio, and getting back to his living room I see more, and there is a room full of works as well. His lovely family once again bid me farewell.

While seeing me off, he notes that he ensures high quality of work by working with references amid over 30, 000 materials, and also makes videos, especially of children playing.

While in my car and about to move, he makes a truly parting shot with a comment on the timing of his work. “Now, I am not painting to sell, but I am painting. It will sell. It is just like the theory of success. You don’t run after success, you do your best to meet a need and success will come. I am not saying it to loud myself, but it is something that is happening”.

Leaving his estate around 6 pm, I feel fulfilled spending a day with this artist.