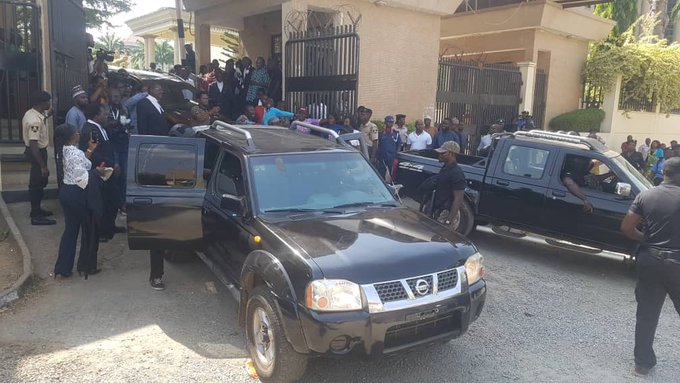 The Senate on Thursday expressed dismay over an alleged invasion of a federal high court in Abuja by operatives of the Department of State Services (DSS), recently, and ordered an investigation into the incident.

The security agents were alleged to have invaded the court to arrest the convener of the #RevolutionNow, Omoyele Sowore, who is standing trial for treason.

On Thursday during plenary, the Upper Chamber frowned at the unlawful act by the men of DSS and detailed its committee on judiciary and legal matters to immediately investigate the incident to get more facts.

The Senate’s decision came as reports Thursday said the Federal Government had also ordered an investigation into the incident. A video of the commando-like attack on Sowore in a courtroom went viral week, eliciting severe criticism on the security department.

The Senate said it was peeved that the court is a sanctuary of judiciary and should not in any way be invaded in the manner that the security operatives reportedly did.

The motion on the matter was moved by Senator Bamidele Opeyemi (Ekiti Central) who is Chairman, Senate committee on judiciary and legal matters.

Opeyemi who came under order 43 of the Senate rules, said the issue had raised a lot of concerns from Nigerians and that there was no way the Senate as a law-making institution would look the other way.

“They reported the alleged invasion by officials of the DSS and the issue has raised a lot of concern in Nigeria. The members of the judiciary believe that the courtroom should be the sanctuary.

“Yet, much as Senate cannot jump into conclusion, we should be aware that Nigerians are concerned about it.  We still need to have incontrovertible facts.

“The judiciary must find our voices and we should mandate the committee on National Security and Intelligence to investigate and report back the facts,” Opeyemi said.

While ruling on the matter, Senate President Ahmad Lawan, however, referred the investigation to the committee on judiciary “to find out what happened and report back in one week”.

OkadaBooks For the Weekend Featuring ‘Never Play Games with the Devil’

Air Peace debunks report that its aircraft was seized in USA