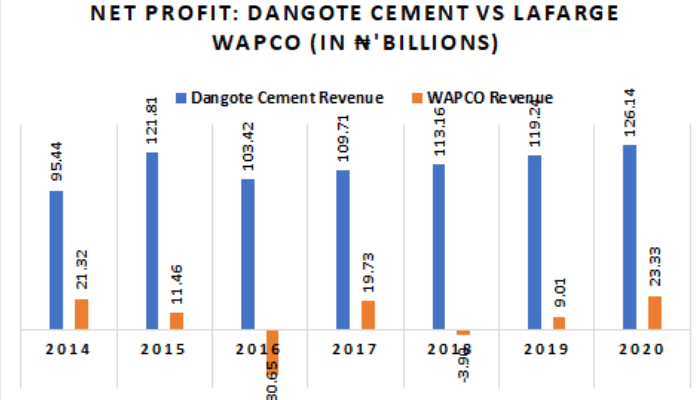 Nigeria’s biggest cement makers by market value appear to be doing relatively well despite the Covid-19 pandemic which has upended key sectors of the Nigerian economy.

Two of the largest cement makers in the country, Dangote Cement and Lafarge WAPCO both saw their net profit hit the highest level in seven years in the first half of 2020, according to data collated by Business Day from the companies’ financial reports.

Similarly, BUA cement, which is the second largest cement maker based on NSE market capitalisation, had higher net profit of N34.8 billion in H1 2020 compared to N30.6 billion in H1 2019.

A deeper dive into the numbers shows that the increased profit was mainly driven by revenue growth which grew faster than cost of sales. 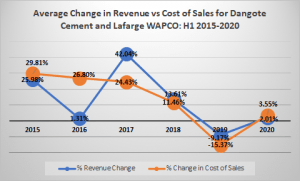 Also, explaining the higher profits seen in Dangote cement group for H1 2020, Gbolahun Ologunro, a research analyst at Lagos-based CSL Stockbrokers said that “the strong performance in Q1 2020 softened the impact of Covid-19 and slowed-down construction activities on Q2 2020.”

“By observing the quarterly statistics, we are better able to isolate the likely effects of the Covid-19 pandemic. So, compared to Q1 2019 which experienced lesser capital expenditures, Q1 2020 had a much stronger performance,” said Ologunro.

So, while Dangote cement saw higher revenue on half-year basis, on quarterly basis, revenues declined to N249 billion in Q2 2020 from N227.7 billion in Q1 2020, showing an 8.6% decline compared to its 17.6% growth when comparing with the previous quarter.

In line with this, for the observed period of 2014 to 2020, revenues and cost of goods sold for Dangote cement has been on the increase with the exception of H1 2019 which saw a decrease but slightly recovered in H1 2020.

For Lafarge, Ologunro recognised that “the sale of the South African business and the Q3 2019 supported stronger growth of revenue and profits.

“The South African branch appeared to be dragging down the company due to poor macroeconomic conditions which stimulated poor revenue, higher debts and increased pressure on financial cost”.

“So, the sale of the South African branch was able to settle piled up debts, which informed revenue growing at a faster pace than cost of sales”, Ologunro stated.

The trend of revenue, cost of sales, net profit, gross margin and cost margin reveal that both companies had the least performance in H1 2016 which was when Nigeria experienced its worst recession in 25 years.

Excluding BUA cement, which only got registered with NSE in 2020, the industry average of gross margin for Dangote and Lafarge was N50 in 2014 and 2015 but this dropped by about N17 in H1 2016 for every sale on half year basis.

This highlights that H1 2016 experienced more of a decline than H1 2020. This could be attributed to the economic recession already being felt by Nigeria in Q2 2016, compared to 2020 which has only seen its first negative GDP growth and is projected to experience more declines in economic growth.

For both cement companies, Akinloye explained that “since cement demand is on contract basis where orders are placed ahead of sales to distributors, the impact of Covid on Q2 2020 revenue was not so severe and might not be felt until Q3 2020.”

“So, if negative GDP growth rate continues, evaluating Q3 on Q2 2020 might reveal pressure on revenue and consumer income, thereby showing the true effects of the Covid-19 pandemic on cement industries in the industrial sector.”