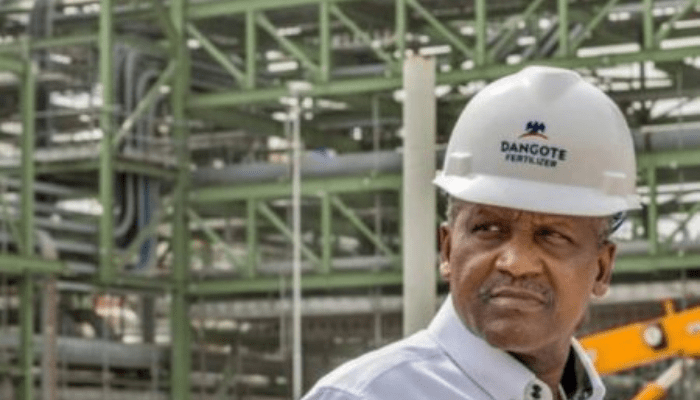 The Federal Government has asserted that Dangote Fertiliser Limited is very important to the achievement of its Agricultural Transformation Agenda, aimed at boosting food security in the country.

Besides, the construction of the Fertiliser plant has been fully completed and is set for commissioning in the next few months.

The Minister of Agriculture and Rural Development, Muhammad Sabo Nanono, who stated this during a facility tour of the Dangote Fertiliser plant in Lagos at the weekend, called on the company to assist the Federal Government’s agricultural mechanisation scheme as well as extension services for small scale farmers.

According to him, Dangote support is needed for the success of the mechanisation scheme, which he said, is expected to cover 632 local government areas across the nation.

“It is very clear that Dangote, in one way or the other, will help in this programme by the Federal Government.” he said.

SEE ALSO: Covid-19: CVL, others provide succour to the vulnerable in 3 Lagos communities

According to him, the Federal Government wants to make sure that Nigerians have enough food to eat. We can only achieve the objective with enough fertiliser in the country. I am extremely proud of Aliko Dangote for what he is doing in this country. I think no other person has probably done half of what he is doing in the area of investment. If we can have just an additional two of his type, this country will be completely different. I think all we have been trying to do as far as agricultural development is concerned, has been captured by the Dangote Fertiliser plant. Nigeria has the potential for agriculture. Obviously, Dangote Fertiliser is going to help the government and the farmers, he said.

He added that the Federal Government wants to make sure that Nigerians have enough food to eat. We can only achieve that objective with enough fertiliser in the country. That’s why we consider Dangote Fertiliser as a partner in progress in achieving food sufficiency in the country, he said.