You need to active Javascript on your
LEAD STORY,Short Take NSE

In 10 numbers, how Nigeria’s biggest companies have fared in 2020

Nigeria’s biggest publicly listed companies have faced a myriad of challenges in the first half of the year 2020 with the COVID-19 pandemic and oil price crash eating into companies’ earnings and overall profitability while shooting up their expenses.

The economy is expected to enter its second recession in four years by the third quarter after contracting by a record 6.1 percent in the second quarter.

Companies are typically on the receiving end of a recession which affects their sales growth and hurts profit.

In Nigeria’s case, lower sales is not the only challenge companies must contend with, but also rising costs on the back of an acute dollar scarcity -caused by lower oil prices- that has forced several businesses to source dollars at a premium of around 20 percent at the black market.

When companies’ profits fall and costs rise materially, it leads to job loses. There’s been a spate of companies announcing job cuts in Nigeria with the most recent being oil and gas firm, Chevron which announced that it will shed 25 percent of its workforce.

Increased job loses will be particularly worrying for Nigeria where unemployment rate is at a decade-high of 27.1 percent and is forecast to hit 45 percent by year-end by economists at trade advocacy group, Lagos Chamber of Commerce and Industry (LCCI).

The following numbers dive deeper into the struggles of the 30 biggest listed companies on the Nigerian Stock Exchange (NSE) in H1 2020.

Given the unexpected occurrence of the COVID-19 pandemic, this drop in profit after tax between 2019 and 2020 on a half-year basis is largely driven by costs rising 4.9 percent faster than revenue.

This indicates that despite higher total revenues, the N192.4bn increase in cost surpassed the N136.13bn rise in revenue within the period under review and that contributed to lower profits.

This figure again proves that revenue growth was much slower than the rise in cost.

Companies in the Agriculture sector were the most profitable of the 30 companies surveyed in H1 2020 as the combined profit of the two companies representing the sector, Presco and Okomu Plc, grew by 64 percent to N8.39bn from N5.1bn recorded in the same period last year. Presco and Okomu produce palm oil.

The biggest financial services companies grew their combined profit after tax by 1.40 percent to N475.3bn in H1 2020 from N468.78bn in H1 2019. The numbers analysed are for the twelve commercial banks that feature in the NSE 30.

The companies that gave the sector a boost in the H1 2020 are Fidelity bank, First City Monument Bank (FCMB), Stanbic IBTC, First Bank and Zenith Bank as they grew profit by 33 percent, 28.8 percent, 24.7 percent, 23.8 percent and 16.9 percent respectively.

The three oil and gas companies that make up the NSE 30 posted a combined loss of N35.8 billion in the first half of the year. The companies surveyed include, Total Nigeria, Seplat and 11plc.

Total Nigeria recorded a loss of N537 million in June 2020, a 513 percent crash from a profit of N129.9million recorded in the same period last year. 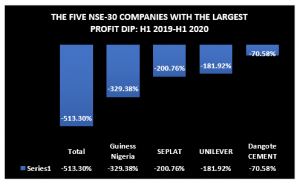 The three biggest industrial goods companies saw profit dip by 51 percent to N117 billion in the first half of the year from N240 billion in H1 2019.

Despite the drop in profit, the share price of the three companies increased by 3 percent to N67.25 from N65.3 year to date.

Lafarge Africa (WAPCO) had an impressive performance as the company’s profit shot up by 158.9 percent to N23bn in H1 2020 from N9bn recorded in the first half of 2019.

The largest companies in the consumer goods sector were the third greatest contributor to the profit decline of the NSE 30. The sector saw profit dip by 45 percent to N33bn in June 2020 from N60.8bn as at June 2019. Eight companies from the sector feature in the NSE 30. They include Guinness Nigeria, Unilever Nigeria, Nigerian Breweries, International Breweries and Nestle. Others are Flour Mills, Dangote Sugar and Nascon.

The following companies were however able to grow their profit despite the pandemic: Flour mills (98%), Dangote Sugar (5.51%) and Nascon (2%).

Julius Berger, the only construction company to make the NSE 30 list, recorded a profit after tax of N1.9bn in the first half of 2020, a 32 percent decline from N2.8bn in the same period last year. 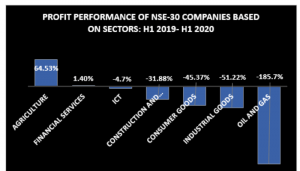