Former AGF, Adoke returns to Nigeria after freedom from INTERPOL 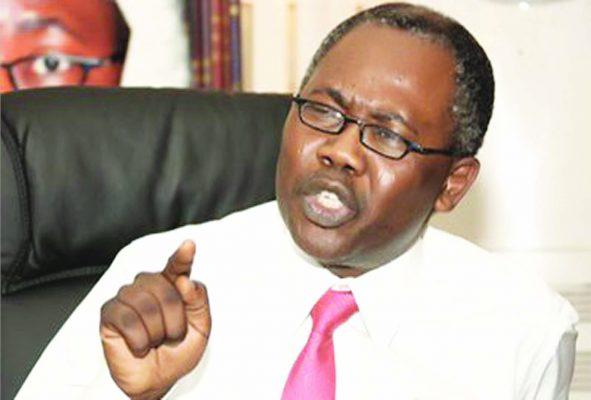 Former Attorney General of the Federation, Mohammed Bello Adoke (SAN) is set to come to Nigeria after he regained freedom from the International Police (INTERPOL).

Adoke was released after one month and a week in the custody of INTERPOL in Dubai, United Arab Emirates (UAE).

According to Ozekhome, the former AGF opted to come back to Nigeria, so as to enable him to clear his name in the alleged fraud in the OPL 245 otherwise known as Malabu Oil deal.

“He opted to come to Nigeria, he could have gone to any other country of his choice. But he is on his way to Nigeria and he will arrive this afternoon”, Ozekhome said.

Ozekhome disclosed that Adoke bought his ticket himself to return to Nigeria because he believed he was innocent of the charges against him.

“He is coming on his own volition, he was not extradited, the federal government could not extradite him and would even have no reason to arrest him on his arrival because the order for his arrest has been set aside by Justice Zenchi on October 25,” Ozekhome added.

Adoke was arrested on November 11 in Dubai by the INTERPOL immediately he entered the country to seek medical attention.

The international police said their action was based on an international bench warrant for Adoke’s arrest issued on April 17, 2019 by Justice Danlami Senchi of the High Court of the Federal Capital Territory (FCT).

But Adoke had insisted his arrest in Dubai was illegal since the purported bench warrant had been vacated by the same court.

However, the INTERPOL and the authorities in UAE, had to release him on Wednesday when nothing was found against him.

Adoke’s extradition was faced with some huddles following failure of the federal government to communicate with Interpol and the authorities in Dubai, on the order setting aside the bench warrant for his arrest.

Justice Senchi had on April 17 issued a bench warrant for the arrest of Adoke and other defendants in the case but vacated it on October 25 following an application made by Ozekhome to that effect.

The Economic and Financial Crimes Commission (EFCC) had in 2017 filed charges against Shell Nigeria Exploration Production Company Limited and 10 others, including Adoke and Nigeria Agip Exploration Limited.

They were also accused of other forms of offences involving the sum of about $1.2billion, forgery of bank documents, bribery and corruption.

Already Justice Zenchi has commenced hearing in Adoke’s motion seeking the removal of his name from the Malabu Oil scam trial.

Adoke had in a motion, M/763/19, filed by his counsel, Chief Mike Ozekhome SAN, sought an order of the court striking out his name as a defendant in the case pending before the court.

His request was predicated on the grounds that he had secured a judgment of the Federal High Court in Abuja, against the Attorney-General of the Federation, representing the Federal Republic of Nigeria wherein he was completely exculpated with respect to the facts and circumstances relating to the Malabu Oil scam.

Ozekhome argued that having been exonerated in the Malabu Oil scandal by Justice Binta Nyako of the Abuja Division of the Federal High Court, the inclusion of Adoke’s name as a defendant in the criminal case was erroneous.