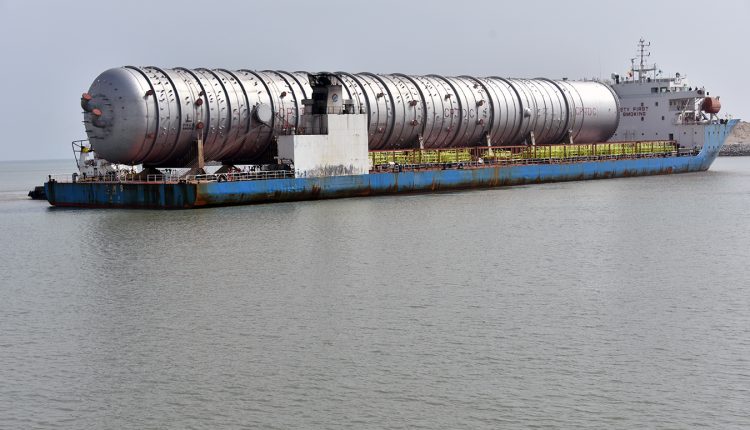 The world’s largest crude distillation column equipment designed for crude oil processing for Dangote Refinery has arrived Lagos, the location of the plant.

The Crude Distillation Column is the largest in terms of distilling capacity which is 650 thousand barrels per stream day. Rajen Sachar, Head, Maritime and Ports Infrastructure of Dangote, told newsmen during the arrival of the facility in Lagos on Sunday that the equipment is the biggest single-train facility used for refining crude.

The above-mentioned weight does not include the weight of the internal trays which is approx. 536 MT.

It is the largest diameter, longest length and the heaviest single-unit equipment in domestic export equipment, Sachar said.

” It will be installed in the world’s largest single-series refinery – the 32.5 million tonne/year Dangote refinery in Nigeria.

” It will be installed in the world’s largest single-series refinery – the 32.5 million tonne/year Dangote refinery in Nigeria,” he explained.

The refinery equipment which was manufactured by Sinopec in China is the primary unit processor of crude oil into fuels.

He said that crude oil processor took 14 months in construction by Sinopec company in China and eight weeks to bring it down to Nigeria.

He added that the crude distillation column works on the principle of fractional distillation leading to separation of various components in the mixture on the basis of their different boiling points.

” Crude oil enters the top of the column, where the inlet temperature is 165  °C, gradually increasing to 357 °C at the bottom of the column.

“When the vapour reaches the height within the column where its boiling point is equal to the temperature of the column at that height it condenses to form a liquid.

“The liquid then collects on various trays in the column at differing heights from where it is extracted out of the column.

“It is therefore critical to control the heat load of the column to optimize the crude crack.

The company’s captain said that the refinery when completed will produce Euro-V quality gasoline and diesel, as well as jet fuel and polypropylene.

He said that the crude column will enhance the Nigerian economy and all neighbouring countries in Africa by making available refined petroleum products meeting world standards emission norms of Euro 5 and Euro 6.

The captain said the strategic location of Nigeria in West Africa will help in reducing the transportation costs of these fuels to other countries in the African subcontinent.

“This Refinery with a capacity of 650 kbpsd is higher than the total demand of Nigeria, thus catapulting Nigeria’s position from a net importer of petroleum products to a net exporter,” he said.

He said the technology would bring positive multiplier effect to the company and Nigeria through supply to a large market. Sachar added that the project was expected to generate over 9,500 direct and 25,000 indirect jobs.

” We decided to ship it through vessel from China to avoid it being damage and also to avoid traffic congestion if using roads from Apapa.

” Dangote refinery also invested heavily in dredging to sea from refinery to Apapa for easy passage of the vessel.

He said that the President of the company, Alhaji Aliko Dangote is passionate about technology transfer to Nigerians, adding that he has given a standing instruction to train seven Nigerians be ship Captains.

Sachar said Dangote Oil Refinery Company is currently training about 150 young Nigerian engineers in Indian on refinery operations in preparation for the take-off of its Lagos refinery and petrochemical plant. The engineers are currently undergoing training Mumbai, India, he said.

The training is a continuum as more engineers would be trained to work effectively in the fertilizer plant and refinery being built by the company, Sachar added.

In his remarks, Lawal Fagbo Saheed, Pilot Grade 1 of the Nigerian Ports Authority (NPA), commended the vessel crew who brought it from China, adding that it took seven hours to drive the vessel from Apapa to Dangote Refinery due to the heavy equipment.

According to Saheed, “It took an experienced and patient pilot to move the vessel to the final destination due to sea waves.

” We are happy today that am also part of progress and am proud to be associated with such landmark achievement.

For the poor to survive the coronavirus pandemic, keep money circulating