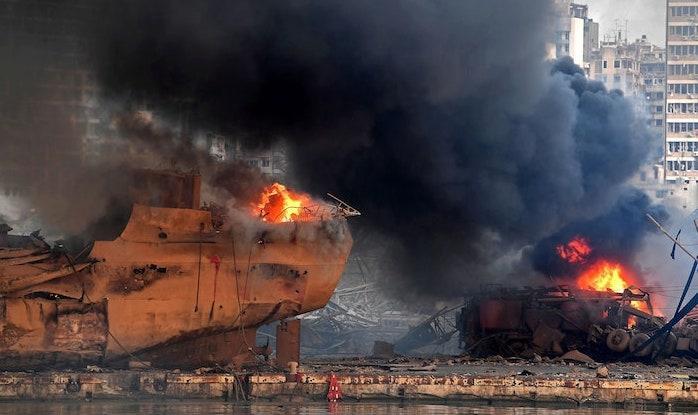 As Nigeria’s ports in Lagos continue to grapple with persistent traffic congestion caused by high volume of articulated vehicles moving in and out of seaports as well as oil jetties in Apapa, industry experts say the country needs to learn lessons from the recent explosion that took place in Port of Beirut, Lebanon, by decongesting the port city in order to avert such danger.

On August 4, multiple explosions occurred at the Port of Beirut after 2,750 tons of ammonium nitrate stored improperly in a warehouse at the port caught fire. The blast killed close to 200 people and injured around 6,000, leaving many homeless.

Report has it that the cargo was intercepted in September 2013, when a Russian-leased cargo vessel loaded with ammonium nitrate heading to Mozambique reportedly made an unscheduled stop in Beirut due to financial and mechanical troubles. Lebanese officials then, citing unpaid fees and safety concerns, prevented the vessel from sailing, leading to it being abandoned by its owner.

In Nigeria today, there are over 5,000 twenty-foot equivalent units (TEUs) of overtime and abandoned containers with expired goods that were either intercepted by Nigeria Customs Service (NCS) or trapped for many years in Apapa, Tin-Can and Onne Ports for several reasons.

Further checks show that there are over 1,000 vehicles and scraps that have spent between 90 and 4,000 days in the port, creating about 90 percent yard occupancy rate at the terminal without being evacuated.

As a result, Nigerian ports, especially those in Lagos, now lack sufficient space to discharge vessels as ships now spend 30-50 days’ waiting time on the waters.

Hassan Bello, executive secretary of the Nigerian Shippers Council (NSC), who confirmed that there is congestion both at the seaside and at the terminal, said there are lots of cargoes that are abandoned at ports, and they ought to be auctioned.

“We would suggest to Nigeria Customs to do on-the-spot auctioning without having to spend money to take those goods out of the port. Most of them are expired goods and we have to help the terminal operators to clear the ports so that ships could come in on a better timing rather than 50 days waiting time that shows inefficiency,” Bello said.

Jonathan Nicol, president, Shippers Association of Lagos State, said in confiscating goods for any reason, Nigeria Customs should be aware of some volatile chemicals used in the food industry that should not be exposed to intense heat.

He said that exposing such chemicals to intense heat could result to an accident that can erase any port such cargoes are domiciled. He advised Customs to accelerate the release of raw materials, especially for food and drinks industries, to avoid the danger of explosion.

Secondly, there are over 60 petroleum tank farms that are located within Apapa which not only contribute to the congestion on the port roads but also create serious threat to lives and property.

Nicol reckoned that Nigeria has a lot to learn from the disaster that took place in Beirut Port. He said Nigerian government has been warned in several ways of the impeding danger of the tank farms that were built few metres away from residential community.

“In Nigeria, we place more premiums on money than life itself. The tank farms have outlived their purpose. They are a collection of time bomb that could be 100 times worse than the Beirut experience. Therefore, we seek government’s political will to relocate the tank farms,” Nicol said in a phone interview.

According to him, if such disaster happens, the whole of West Minster, Coconut and a large part of Apapa would be in flames as air would carry the gas component to many miles.

“Ajegunle will be gone. Tin-Can Island Port will be involved because the volume of gas and Premium Motor Spirit (PMS) in the tanks including kerosene will be difficult to put out by fire fighters. It will be a story from the lowest hells,” he warned.

Ignatius Uche, chairman, Port Facility Security Officers (PFSO) forum, Lagos Maritime Security Zone, said such incident could happen at any other port if proper procedures and protocols are not adhered to with respect to International Maritime Dangerous Goods Code (IMDG).

According to him, Nigerian government should learn a lesson from the unfortunate incident that happened in the Port of Beirut to relocate the tank farms to forestall any disaster that may lead to loss of lives and investments.

“The concentration of tank farms in Apapa, which is a port area, has become a source of concern. It’s an aberration for hazardous materials, toxic and highly inflammable goods to be stored in the port along with other categories of goods,” Uche said.

“We need to begin to think out of the box by considering the critical impact of such disaster if it happens in Apapa with the multiple tank farms and heavily congested traffic situation,” he said in an interview with Ships and Ports.

While stating that the time to relocate tank farms from Apapa is now, especially along the Kirikiri axis to Ijegun where new ones are springing up on a daily basis, Uche questioned the rationale behind the issuing of licence for the establishment of tank farms within these thickly populated communities.

Vicky Haastrup, chairman, Seaport Terminal Operators Association of Nigeria (STOAN), who has on several occasions asked the Federal Government to create plan for the relocation of petroleum depots from Apapa, said Nigeria needs to take urgent steps to avoid a repeat of the Beirut Port catastrophe by moving tank farms away from residential and crowded areas such as Apapa.

“We are concerned about the preponderance of tank farms in Apapa, which is a port area and a high-density town. With more than 60 tank farms operating in the area, the ports, the workers and residents of Apapa are sitting on a keg of gunpowder. We pray it does not explode, so we appeal to the Federal Government to urgently see to the relocation of these tank farms to avert a future carnage,” she said.

According to her, tank farms should normally be located several miles away from the city and from the port area for safety reasons.

She noted that the large number of tank farms and oil depots has contributed to traffic congestion in the Apapa area.

Ports in Lagos, analysts also advised, need to reduce congestion at the port gates as well as port roads by adopting sustainable cargo evacuation modes such as rail and barges, and removing multiple checks by various government agencies in order to have free flow of traffic in an emergency situation.