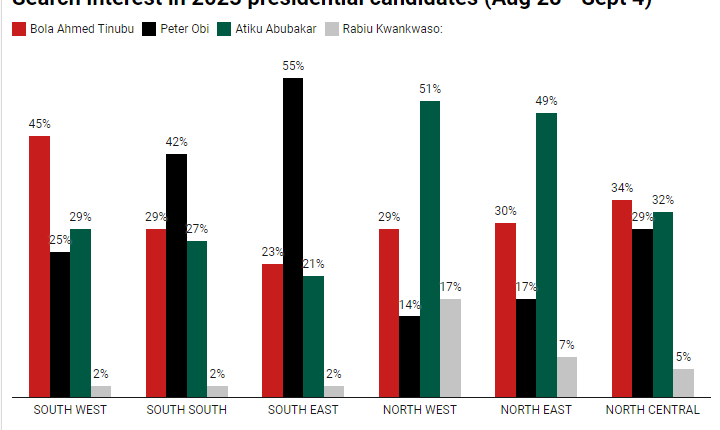 BusinessDay’s analysis of Google trends data on search interest show that the three major presidential candidates for the 2023 election have yet to expand beyond their strongholds.

Google trend is an essential tool in predicting the outcomes of elections.

In the recent Kenyan presidential election, the average share of search interest for the winner (William Ruto) was 1,329 as against 324 for Raila Odinga, the runner-up.

Similarly, data gleaned from Google trends show that the winner of the Osun State election, Ademola Adeleke, had a far higher average share of search interest than the runner-up, Adeboyega Oyetola.

According to BusinessDay’s analysis of the data, Atiku Abubakar, the flag-bearer of the Peoples Democratic Party, remains a dominant figure in the North, Bola Tinubu of the All Progressives Congress holds sway in the South-West, and Peter Obi of Labour Party is prominent in the South-East and the South-South. 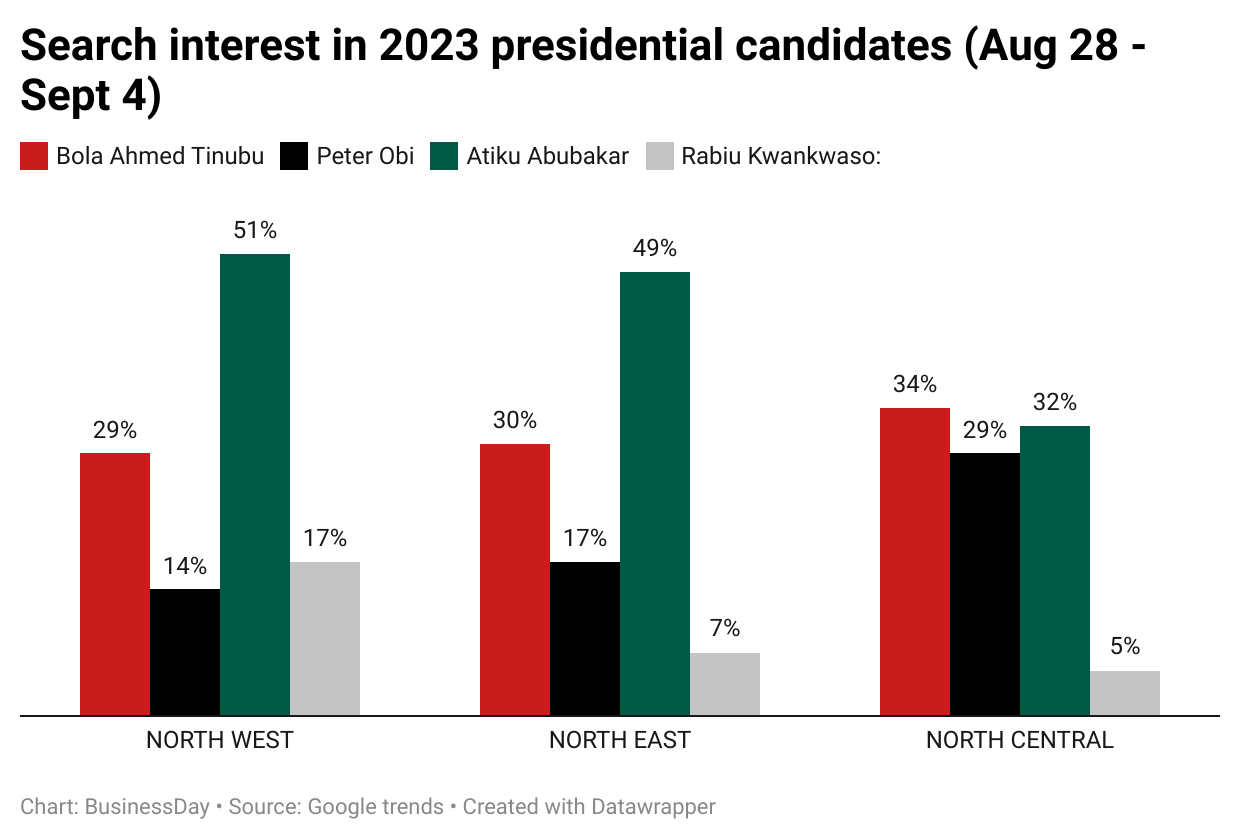 Tinubu got an average of 20 percent of the search interest across all regions.

Obi’s influence is not as vibrant in the North as it is in the South-East. The average search interest in Obi is highest in Plateau, Nasarawa, and Benue.

Rabiu Kwankwaso, the presidential candidate of the New Nigeria People Party, is struggling to gain influence across all regions. His influence, according to average search interest, is highest in the region where he was once governor: North-West.

The Northern Alliance has the country’s most active voters and comprises 11 northern states (Gombe, Sokoto, Jigawa, Zamfara, Kano, Kebbi, Bauchi, Katsina, Yobe, Borno) and one south-western state (Osun). Their loyalty has been to the PDP. 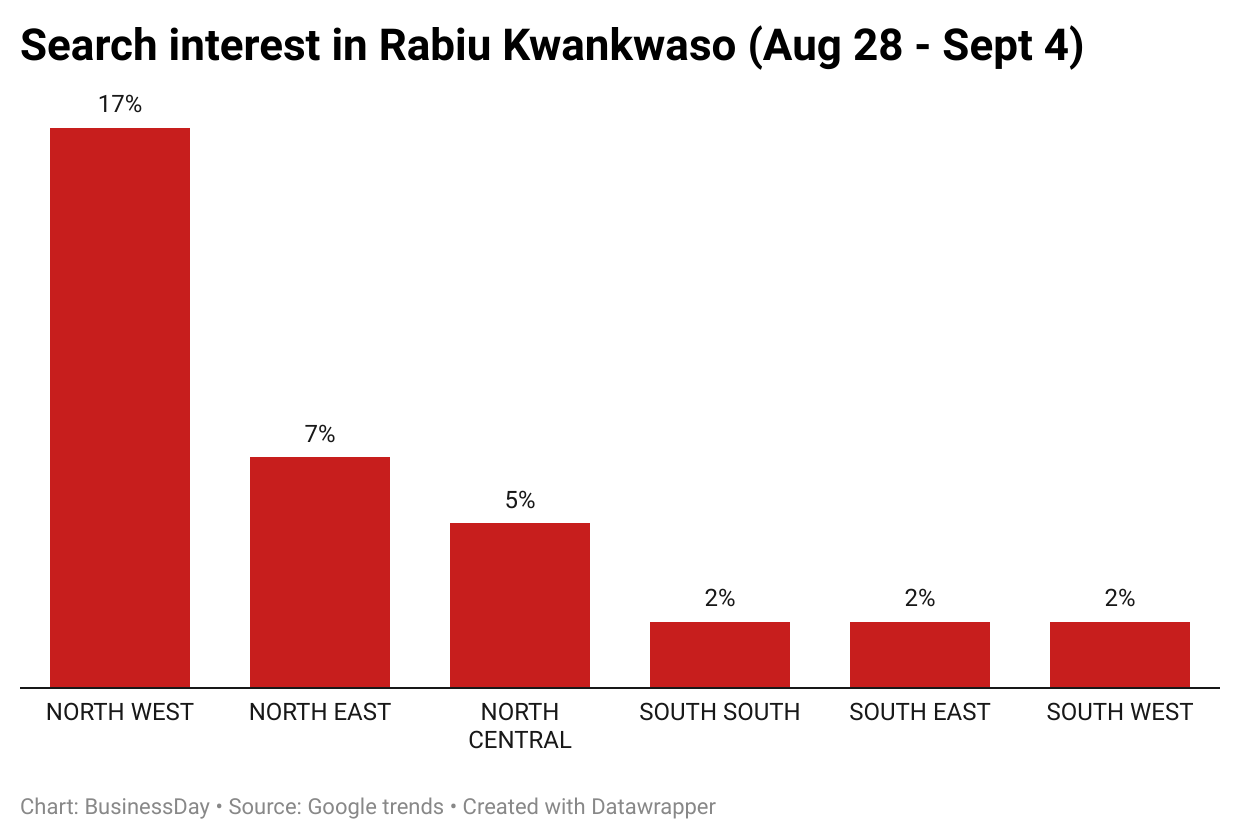 The Bible Belt, another PDP loyalist bloc, which has the highest number of voters but low voter turnout is made up of 17 states drawn from the South-East, South-South, and eastern North-Central.

Analysis by BusinessDay shows that this loyalty is wavering as the Labour Party presidential candidate, Obi, is dominating across all states in the South-South and South-Eastern region while the North-Central is being controlled by Tinubu.

The Rockies are Nigeria’s most unpredictable voters and the tie-breakers, with the lowest voter turnout of the three blocs. These states include Kaduna, Niger, Kogi, Lagos, Ondo, Ogun, Oyo, Kwara, and Ekiti, which have been dominated by Tinubu, except Kaduna and Niger, which have been held down by Atiku. 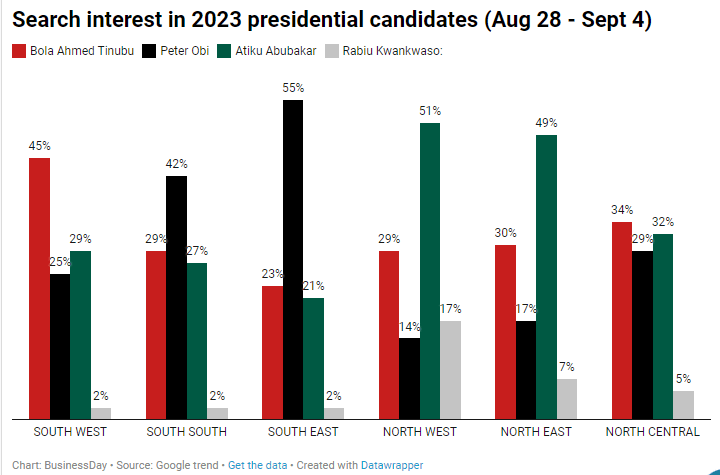