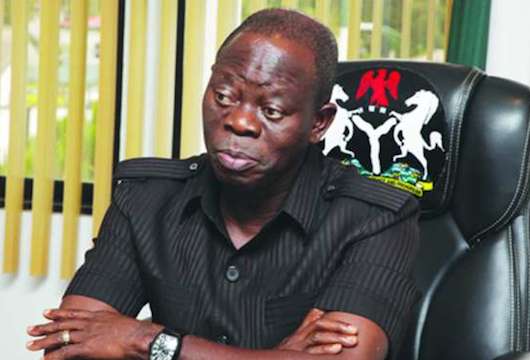 Salihu Lukman, Director-General of the Progressive Governors Forum has blamed Adams Oshiomhole,   National Chairman of the All Progressives Congress, APC for the diminishing fortunes of the party, particularly in the last general elections.

Lukman in a letter entitled “APC: Appeal for Reconciliation,” dated August 6, 2019 and addressed to the APC National Chairman, said; as a loyal party member, he has difficulty reconciling the absence of meetings of superior organs given all the challenges the party is going through, warranting the suspension of three serving governors (two of them now Senators) and two members of the National Working Committee.

He declared that, “my distant observation is that there is hardly any difference between your approach in managing the party and the way Chief Oyegun had managed it during his tenure. Instead, things have really got worse and painfully, it would appear, you are in denial of this reality.”

While referring to earlier efforts he made to draw the party chairman’s attention to the growing problems in the party, he said, “Kindly recall that sometime in June this year (2019). I sent what I called a Private Memo on the issues of reported disciplinary actions against Governor Rotimi Akeredolu of Ondo State by the National Working Committee (NWC).

The APC Governors Director-General noted that “It would appear that the leadership problems facing the party are getting deeper and in the circumstances, the business of building the party will be sacrificed.”

He decried that, “we had challenges that deprived our party the opportunity to contest 2019 election in Rivers, stripped our party of electoral victory in Zamfara, engendered highest levels of leadership animosities in Imo, Ogun, Adamawa, Bauchi, Kano, Ondo, Oyo, etc. Today, with Kogi and Edo elections approaching similar leadership animosities are defining the political life of the party in those states.

Lukman stressed that “it is a painful reality that we have found ourselves in situation of near stalemate in many states under your leadership. Embarrassingly, our leaders, including your very self, appear to be stubbornly inconsiderate of other options of resolving these challenges.”

He queried “If the electoral loss of Oyo, Imo, Zamfara, Adamawa and Bauchi are not a wakeup call to the dangers that lie ahead, what could have been! Is it that our leaders are indifferent to the possible return of People’s Democratic Party (PDP)?”

“In all my years of association with you, I never imagine that one day you will be so comfortable as to be indifferent to challenges that could threaten our national democratic development.

“Sir, there is the need to urgently refocus our party and all our leaders on the most critical political issue in the country, which is about reconciling our leaders at all levels.

“This is urgently needed in order to recreate the electoral advantage of our party. It is an advantage, which will keep diminishing once our leaders continue to grandstand and take positions with reference to technicalities.”

“Grandstanding with reference to technicalities is the trade mark of Nigerian lawyers, with due apologies, which has produced the reality whereby the capacity of our legal and Judicial systems to deliver justice are weak.

“Once our reference point is some of those technical details, which rationalises where we are, the tendency is that all proposals will be reduced to conquest scenarios, which may only deepen and create new conflicts.”

“Above all, sir, can we, in all honesty, justify why Chief John Odigie-Oyegun had to be asked to vacate the leadership of the party on accounts of your management records of the party’s affairs between June 2018 and now?

“Some pointers may be helpful in this respect. Many of us who are members of the party could not understand why it took more than two years after winning the 2015 election for Chief Oyegun to convene meeting of organs of the party. notably, National Executive Committee (NEC) and National Caucus.

“Today, more than four months after winning the 2019 elections and almost one year after the last NEC meeting on August 30. 2018 no sign of any meeting in sight. The only organ that is meeting is the NWC”, the letter read.