Why cartoons are more popular than painting in Nigeria – Ganiyu Jimoh

Ganiyu Jimoh is a cartoonist, scholar, activist, and digital artist. He holds a PhD in Visual Arts from the University of Lagos, Nigeria, where he has taught Graphic Design and African Art History courses. He has received international awards for his scholarly contribution to African Art and political discourse. He was a recipient of the African Studies Association Presidential Fellowship Award in the United States of America in 2019 and a Postdoctoral Fellow with the Arts of Africa and Global Souths research programme, Department of Fine Art, Rhodes University, South Africa, in the same year. As a scholarly writer and a practising political cartoonist, Jimga (cartoon signature) has several local and international exhibition and scholarly publications and to his credit. In this interview with ISIGUZO DESTINY, Ganiyu discussed cartoons as an art form, and how he is using his art works and researches in extending the frontiers of knowledge in digital art and animation in Nigeria and in the United States of America where he is a visiting cartoonist and scholar.

Your first international solo exhibition titled ‘The Change We need’ was staged at the International Center, Michigan State University, USA in 2015; your recent exhibitions are mainly group shows in the US, Germany, Canada and the UK. Why did you decide to do exhibitions abroad while the majority of the cartoons in that exhibition speak to the Nigerian issue and condition and addresses a Nigerian audience? Does this mean you believe in the universality of art, that is, that your artwork speaks to all peoples, including the white audience that was largely made up of people of the Global North who may not even be conversant with the social context of the cartoons?

My works don’t just address local issues; most of them are targeted at global issues with local implications and vice versa. Political cartoons could be contextually deterritorialised in their interpretation and relevance. That is why my works still appeal to a global audience regardless of immediate concern. That being said, some specific works are intentionally produced as an intervention on the global issues of migration, decolonization and repatriation of cultural heritage under the western countries’ occupation. For instance, my cartoon “double standard”, created in 2010, has been interrogated in at least ten scholarly publications and featured in twelve exhibitions in Nigeria and abroad. It is currently in a group exhibition titled “In a Pot of Hot Soup” at the Brunei Gallery, School of Oriental and African Studies, University of London, UK. Despite being produced in 2010 on the subject of Benin artworks stacked in Western museums, its core agency manifests within a multi-layered level of mediation.

The title of your first international solo exhibition in Michigan is: “The Change We Need”, what exactly do you think is this change we need in Nigeria?

As Chinua Achebe states, “when a society is ill, the artist has the right to point it out”. The tensed socio-political realities of the period leading to the 2015 general election resulted in the clamour for the removal of the then Africa’s largest political party – the People’s Democratic Party. The exhibition featured cartoons reflecting the deteriorating standard of living of the commoner and the high level of corruption, nepotism, and insecurity. However, despite the change of government and prominent political actors, eight years after, the polity is still engrossed in the problems leading to the reason for the clamour for change in the first place. I do not believe the call was invalid anyway; the present situation just reminds us that the country needs a total overhaul and not fixing. In a situation where politicians could switch political parties like caps and not based on ideology will lead the country nowhere. With the knowledge of hindsight, the change Nigeria needs now is overhauling the actors with young fresh minds and strong ideology to move the county forward.

Will you say that cartoons as an art form, is popular in Nigeria when compared to other forms like painting?

Cartoons are one of the most popular forms of artistic expression in Nigeria and the world. The reason is that they are intentionally targeted at the masses, hence the use of the mass/social media platforms as their primary form of propagation. Paintings are regarded as “high art” that may require a higher level of visual literacy to be appreciated and digested. One may also need to visit museums and galleries to see or own a piece of painting.

You have written several essays and book chapters on comic arts, and you are also a cartoonist with several local and international exhibitions. Does being a cartoonist and a scholar of comic art rub off on each other?

That’s a very important question. I started as an artist before getting engaged in the theoretical aspect of art – art history and criticism. Being a scholar-artist has helped me understand the creative aspect of artistic production in my writing about art. I engage on a different theoretical level when it comes to analysis because it is not what I assume but what I live as an artist. The knowledge of art history and its theory also contributes immensely to the way I employ imageries in my works. My recent cartoons have been grossly historical and experimental owing to the scholarly knowledge of what could and may not work as a practical strategy in art and political activism. I brought my theoretical knowledge to bear on my practices and vice versa.

Which of your works are you mostly attached to and which of them would you describe as your best?
Interestingly, I do not have any work that’s like “best work” for me. I see these works as pages of different but interconnected texts of my reflections, interpretations, reactions and appreciation of my realities. However, there is one that I can say I’m viscerally connected with. It is titled #Endsars. It was produced against the backdrop of the protest against police brutality in Nigeria in October 2020. The production of the work was cathartic to my feelings after the despicable killing of the EndSars protesters at Lekki Toll gate on October 20, 2020. The claim by the Buhari government that no killing took place was nothing short of emotional brutality. As an activist who was also part of the protest, I felt sad and lost hope in the country’s future since that night until I was able to purge the melancholy through the cartoon. In the work, I related the EndSars protestors’ killings to the 1976 Soweto massacre of school children by the Apartheid regime of South Africa.

As a scholar of comic art, you have won different travel grant that has taken you to many countries, including Uganda, South Africa, UK, US, Germany, amongst others, and you have had the privilege of interacting with other cartoonists and academics, what is their impression of Nigerian art sector particularly cartoons and comic arts?

Nigerian cartooning and cartoonists are well appreciated internationally than in the country. International scholars always foreground the significance of visual activism in the form of cartooning in the democratisation process across the developing world and the need to protect practitioners constantly. Many foreign cartoonists also get inspired by local artists’ works, especially in comic art and its adaptation to animation.

What is your current research on in the United States of America?

At the moment, I am extending the frontiers of my knowledge in cartooning to the study of digital art and animation. From my preliminary research on the subject, I discovered that this area is less researched, especially from the perspective of Africans and the African diaspora. It is essential to explore digital expressions against the backdrop of contemporary virtual forms of socialisation, politicisation and neo-colonisation. The significance of authenticating digital art through blockchain technology and its generic implications are also of significant interest to my research.

Why are cartoons comic in nature and why is it classified as Comics, can’t there be tragic cartoons that may defy the taxonomy comic?

By saying comic in nature, do you mean funny? Humorous? It is wrong to expect that a comic must be funny or elicit laughter. That is the central thesis in my forthcoming book chapter on the humour and representation of violence in cartoons. Because cartoons and comics (sequential illustration) have been attributed to children’s entertainment, most people assume that cartoons/comics should be funny or are of humorous depictions- they do not have to be. Most political cartoons are not funny.

Who are your favourite Cartoonists in Nigeria?

What do you think the Nigerian cartoonists have in common, and what are their challenges?

Nigerian cartoonists are incredibly talented and have the unifying concern of speaking the truth to power. Most cartoonists in Nigeria are trained in other forms of visual expressions, such as painting, graphic design, sculpture etc. and mature to become professional cartoonists through passion and mentorship from practitioners in the industry. This is because, at the moment of this interview, there is no art school with full specialization in comics and cartooning in Nigeria, unlike in the western world. However, Nigerian cartoons are not less professional. The main challenge is that cartoonists are not well remunerated. Most cartoons in the newspaper you see today are freelance works; media houses don’t really employ in-house cartoonists anymore, unlike in the 80s when cartoonists were lured with exotic cars. There are also the challenges of censorship and harassment from power brokers.

Of all the art forms of expression, why did you choose to become a cartoonist?
I chose the medium of cartooning for my political activism because it is quicker, faster, louder, and easier to decipher by the public. I see cartoons as a means of taking an artistic obligation to correct my society’s ills. My scholarly works on cartooning also foreground the medium as a democratic art form, handy in interrogating socio-political issues and serving as visual historical texts. 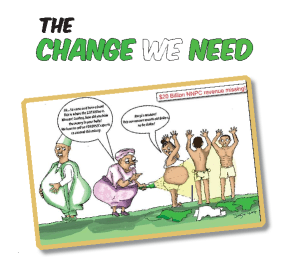 Why strategic employees management is critical for organisations growth, by Nwaneri