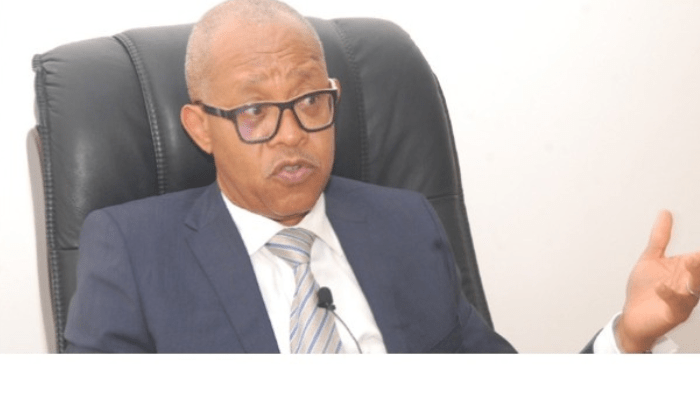 Natural gas constraints in Europe have added new urgency to the Nigerian government’s plans to deepen gas production with big-ticket projects like the AKK pipelines and the Trans Saharan Pipeline under consideration. Emeka Okwuosa, Group CEO and chairman of Oil Serv, who recently was awarded the Commander of the Order of the Niger (CON) national honour, by President Buhari, in this interview with BusinessDay’s ISAAC ANYAOGU and other energy reporters, makes a case for a big role for local oil servicing companies in these projects.

Congratulations on your national honours which recognise your role in delivering critical infrastructural projects that have benefited the economy, how do you plan to build on this, especially with key transnational pipeline projects planned to deliver African gas to Europe?
I want to use this opportunity to thank President Muhammadu Buhari for deeming me and Oilserv deserving of national honour. I believe strongly that this award takes into account our contributions to the country whether in the oil and gas sector, or other areas of Nigeria’s social and economic development.

Over the past 25 years, we have been involved in many projects and have delivered even on difficult ones. Difficult in terms of technical, environmental and sometimes because of politics or even due to insecurity. Despite this, we have delivered on those projects. Oilserv has built several pipelines in difficult terrains- land, swamps, mountains and across rivers. So, I am delighted that a Nigerian company can develop the necessary skill set and capacity to deliver oil and gas facilities of world-class standards.
In Nigeria today, and in most parts of the world, gas has become the predominant energy resource. Of course, oil remains important but more projects will be gas-based.

Gas is peculiar and infrastructure that would match production with transportation and utilisation. That is why you have pipelines, Liquefied Natural Gas and Compressed Natural Gas (CNG) technologies for virtual gas transportation. These take gas to utilisation.
The biggest bottleneck in the utilisation of gas energy in Nigeria today are the pipelines to distribute and of course the LNG for international sales and delivery. Oilserv is always ready and well-prepared to be able to make a difference in the delivery of emerging pipeline projects in the continent.
The Trans-Saharan Gas Pipeline is actually one of the two major international pipelines that are being envisaged. The pipeline is the one that will take off from Kano and go through the Niger Republic and Algeria and end up in Europe.

The project that is actually hot now and is on board in terms of process is the Nigeria-Morocco Pipeline which will run offshore West Africa to North Africa. It will go all the way from Niger Delta to offshore Lagos. It will then go through all the countries on the coast of West Africa until it gets to Mauritania. And then it goes on land through Morocco where it crosses the channel until it gets to Spain.

So these are the key pipelines that are upcoming, and we are very aware of the opportunities and we expect to be part of these. We know that it is a project that might require more than one contractor to execute, but we want to be part of it because we have the capacity to deliver.

At home, the prevailing headache is pipeline vandalism, and many solutions have been proffered including horizontal directional drilling technology in replacing the existing pipelines. How best do you think the problem can be solved?
Pipeline vandalism is not peculiar to Nigeria and it is not new but it has increased in the past few years. It became prominent and impactful on the operations of the oil and gas industry starting in the 2000s. There are quite a few ways to tackle this problem.
We need to strategise on solutions that are cost-effective and deliver on the goals. Gas is not easily stolen because you cannot safely keep the stolen pipeline gas but most of the gas produced in Nigeria is associated with oil production, so whenever oil production goes down, it affects gas production too.

There are quite some existing methodologies to solve the Nigerian pipeline problem. In some areas, it makes sense to use horizontal directional drilling, in some other areas we have the methodologies where we can reinforce the pipelines and make the pipelines invulnerable to sabotage with special coatings that would make it impossible for anybody to find them accessible. Oilserv has that technology. It has already been tested in the United States and it is working there.

Most importantly, beyond technology, we need to develop a system that recognizes the problems we have in this country, find out the root cause of it, and deal with it besides dealing with the symptoms. That will require the concerted efforts of everybody: government, NNPC Limited, IOCs, and in fact all the producers. It also involves all the communities. It involves governments at all levels: local governments, state governments and federal government.

With the government driving mega projects like the AKK pipeline and also opening the market for mini-gas power plants through regulations for embedded power and mini-grid systems, do we have the adequate internal capacity to cope with the rising call for gas supplies?
Yes, as I dimensioned in the course of my deliberations, it is a moving tide. You are aware that gas plans have been in the pipeline for a couple of decades to enable development. One of those is the Nigerian Gas Masterplan which is a masterplan that looks into the backbone gas transmission system. That is the master plan that incorporates the Escravos-Lagos pipeline, including the second loop that has just finished. It is also the masterplan that incorporates the OB3 pipeline which is a major interconnect between East and West networks.

That is the same masterplan that deals with the South to North pipeline, part of which is being built now which is called AKK. The first half will become due to be built as soon as AKK is commissioned.

So all these, plus if we fast forward to the call from NERC regarding embedded power, make for more robust gas utilization. The answer is that all the pieces are being built. I am aware you know that sometimes ago the Gas Code was also passed.

The Gas Code actually governs, defines and controls how gas is transported; and how you manage the value creation. It makes it possible to produce gas in the Niger Delta, put it into the pipeline system and come to Sokoto and pick the equivalent of the same amount of gas. All we need to do is use the principles of the Gas Code to determine the tariff system that you are to meet relative to your production.

So, these things have made the gas transportation industry to be more robust. But there is still more work to be done. The issue is all these initiatives of the government, the much NNPC Limited has done, and what the regulatory agencies have done make for a robust pipeline system for gas. It will take years to take it to a level where it will be fully robust. So it is good to know that it is happening as it is supposed to.

Numerous refinery licences to local players offer new opportunities for EPC contractors in the country and observations show that the development of plants is dominated by foreign companies. What are companies doing to develop local capacity for refinery building?
I like your question but let me quickly put it in perspective so that you appreciate my answer. The oil and gas industry is as wide as anything you can think about. Building pipeline systems, building manifolds, and building stations that are associated with oil and gas is one thing. Building process systems like refineries are all licensed based on the technology that is being used. And when you talk about building a refinery, you have various aspects of services that go into it. But what you do in the end is retain an EPC contractor. Under that EPC, you can have many other companies in there that will be part of that EPC, with a single company being the main EPC contractor.

Let me let you know that an engineering company that designs pipelines can also have the capacity to design complex process systems. It is slightly different but capacity can be built to be able to do both. There are specific companies that build process systems that make up a refinery. But of course, you talk of installation and construction.

So asking why Oilserv is not doing that you need to know it is a bit different from building a pipeline. Oilserv has always been involved and we have always been part of building refineries by actually offering services that are within our own area of knowledge and capacity. We have been involved in the rebuilding and refurbishment of a urea plant. This is a process plant. It has similarities with a refinery and we have our specific scope to do there but not in all scopes.
So, the point is that today EPC companies that can take over the building of a refinery are mostly big multinational companies that have that capacity. Nigerian companies do not have that capacity and it is not because we can’t or because we are too small. It has to do with the area of specialization. Don’t forget that you do not build a refinery every day. Sometimes you develop additional capacity over many years. So you discover that there are only a few of these companies that exist because the market and the industry do not require a multiplication of big EPC companies.

‘We make life easier for residential communities by optimizing their energy…