How Nigeria can remain competitive for impact investments 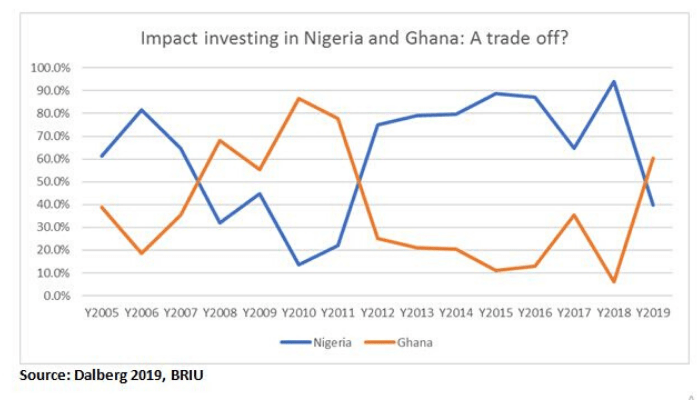 Nigeria and Ghana are two economies in the West African sub-region that have consistently attracted the interest of local and foreign impact investors. The two countries share some similarities and differences which include colonial history, similar climate, economic structures but differ in terms of the size of the market.  Our analysis of the distributions of impact investments in the two countries between 2005 and 2019 showed that, based on the nature of the business landscape, the two countries appeared like a trade-off to impact investors.

As Africa’s largest economy-measured in terms of the GDP, there are so many advantages and privileges that Nigeria enjoys which Ghana does not. Nigeria is the most populous country in the entire black world, the biggest market, and very rich in natural endowments.  Little wonder why the nation prides itself as the giant of Africa.

And this is evident in the trend in the amount of funds invested in both Nigeria and Ghana from 2005 to 2019, that, apart from the size of the market, there are other factors of importance to impact investors when determining how much of their investments should go to either of the West African neighbours.

From 2005 to 2019, according to a report recently published by Dalberg on the impact investing landscape in Nigeria and Ghana, impact investors invested $9.69 billion in the two West African neighbours. 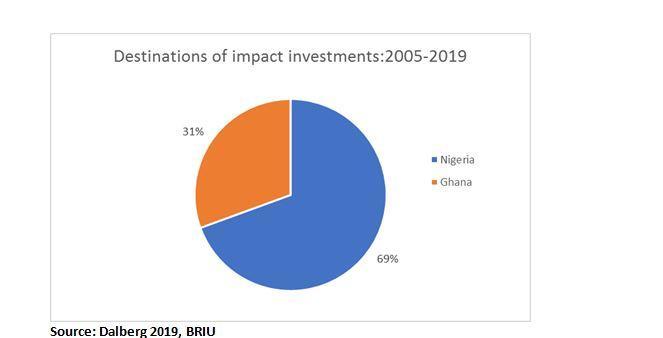 For the next four years, that is, from 2008 to 2011, the Ghanaian economy was paramount to the impact investing community.  In 2008, the total funds that went into impact investing amounted to $275.20 million. But in sharp reversal to the trend in previous years, the Ghanaian economy attracted $187.50 million or 68.1 percent of the total fund.  On the other hand, the Nigerian economy got $87.70 million or 31.9 percent.

In 2019, another era where the Ghanaian economy is seen as being more attractive to impact investors than the Nigerian economy started. In that year, total impact investments amounted to $870.80 million. Ghana attracted 60.2 percent or $524.30 million while Nigeria got $346.50 million or 39.8 percent.

Why the pincers curve above signifies is that impact investors are not going to bend their rules to please anyone, especially, rules that have been empirically tested and proved. As Nigeria carves for more investments, there is a need for those in the corridors of power to work on improving Nigeria’s business landscape.

“If you also look at the diversification of the market in terms of where the DFIs are investing-they are investing in ICT, energy, and others; growth sectors that will address the need of other sectors. My major takeaway is that Nigeria should not be sleeping believing that investors will come. We are not the only populous country in the world. Smaller countries are finding ways to get around the number game by coming together to form a bigger market”, Innocent Chukwuma, regional director, West Africa at the Ford Foundation, said.

Impact investing activities in Africa from Jan to May 2020

‘We have transactions and clients in over 25 African countries’