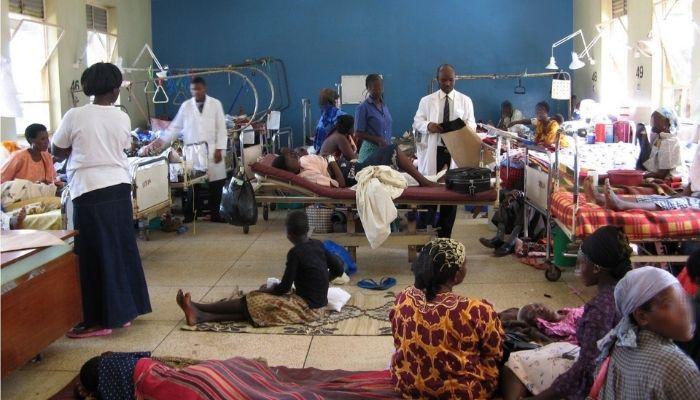 A number of primary health centres in Nigeria are in bad shape as the promise by President Muhammadu Buhari to revive them has yet to be fulfilled.

One of them is the Primary Health Care (PHC) centre that serves the Dott Community in Dass Local Government Area of Bauchi State.

Painted in green and fenced with a gate, the facility, which is a few kilometres away from the highway, has an attractive appearance but a tour of the centre shows a critical shortage of even basic facilities.

BusinessDay observed that the centre lacked basic water, sanitation and hygiene facilities, and the delivery and waiting rooms were messy. The centre suffered critical shortage of healthcare workers, as only two volunteers were on duty during the visit.

It was gathered that the health facility was among the centres recently revamped by government and other partners. President Muhammadu Buhari had in January 2017 pledged to revitalise 10,000 PHCs across the country, but six years on, many primary health centres in Nigeria are still seen as death traps.

The situation of the PHC in Dott Community mirrors the extent of rot in various centres across the country. Several other facilities visited by BusinessDay in Bauchi and the Federal Capital Territory (FCT) were also in different levels of rot. While the centre in Dott had been given a face-lift, many others were yet to be renovated and were in worse condition.

Even the model PHC in Kuchingiro where Buhari made the revitalisation commitment was not performing optimally; the facility lacks water and skilled health care personnel, according to Hamzat Lawal, founder of Follow The Money, an initiative of Connected Development.

“When you go to Kuchingiro PHC, there is no water, no skilled doctor or midwife,” Lawal said on Twitter.

The PHC is the first port of call for health care delivery and closer to the poorest and most vulnerable groups of Nigerians. The Nigeria Health Facility Registry report shows that primary health care facilities make up 82.5 percent of the total health facilities across the country; secondary is 14.4 percent; and tertiary, o.4 percent; this means there are more PHCs in Nigeria than other health insurance institutions.

But, according to the National Advocates for Health, only less than 5,000 out of 30,000 PHCs are functional. There is also a significant disparity between PHCs in urban and rural centres.

Olayinka Oladimeji, former director, primary health care systems development at the National Primary Health Care Development Agency (NPHCDA), in an interview with BusinessDay, said most of the PHC facilities the government had successfully renovated are not performing optimally.

According to him, they do not have the criteria that make up an ideal PHC that can deliver quality care to citizens. He said most PHCs in Nigeria render mainly immunisation services, even though PHCs are supposed to handle 75 percent of healthcare issues.

“Nigeria is still far from achieving the goal of revitalising primary health care,” he said.

He listed paucity of funds as well as lack of commitment and political will by the government as some factors crippling the process, adding that PHCs remain understaffed, lack drugs and the infrastructure needed to provide basic services.

BusinessDay observed that the PHC in Dott was being run by mainly volunteers, some of which were secondary school certificate holders.

“One of the major problems we are facing here is lack of health personnel. If not for the volunteers, the situation could have been terrible, but the situation is still bad. There is so much more that can be done here, and that is not being realised. Another problem we have here is water supply,” Maryam Sale, one of the volunteers, said. She added that the available workers were also poorly motivated.

Similarly, the PHC in Bwari did not have adequate drugs and healthcare workers. One of the healthcare workers who spoke on condition of anonymity said the government had promised a steady supply of drugs during the renovation of the facility, but that had not materialised.

In addition to the shortage of healthcare workers, experts also raised concerns over absenteeism across PHCs. Adaobi Onyechi, a public health analyst, said most PHCs report cases of health workers coming late to work and leaving earlier, or abandoning their duty for volunteers.

According to Onyechi, the challenges in PHCs have made them unattractive to Nigerians who often flock and overburden secondary and tertiary health institutions.

Francis Nwachukwu Ukwuije, a health economist at the World Health Organization (WHO), said PHCs have struggled because of poor commitment on the part of the government in funding healthcare.

Speaking recently at a conference on universal health coverage, he said Nigeria’s public spending is among the lowest in Africa despite being the largest economy in the continent.

As a consequence, he said, most PHCs remain death traps, while the country has the highest out-of-pocket expenditure in Africa, which has pushed millions of Nigerians into poverty.

More so, a 2021 report of PHC and COVID-19 vaccine distribution in Nigeria by Follow The Money shows that a significant number of PHCs are highly understaffed and a number of them are not even connected to the national
grid and so do not have electricity.

Meanwhile, Nigeria continues to lead in global disease burden. According to WHO, Nigeria has one of the world’s highest maternal mortality – and one in eight children dying before their fifth birthday. Available statistics also show that communicable, maternal, neonatal and nutritional diseases account for 72 percent of the burden of disease, and the highest contributors to morbidity and mortality particularly amongst the most vulnerable groups are health conditions that are either preventable or can be effectively managed at the PHC level.

Osagiw Ehanire, minister of health, blamed the high disease burden and frequent outbreaks in the country on the weak primary health care system which he blamed for the “needlessly high maternal and child mortality rates, debility, and too much suffering”.

He decried the failure of states to access and implement the Basic Health Care Provision Fund (BHCPF) as one of the reasons PHCs are not functioning optimally, and crippling the revitalisation goal of one functional PHC facility per political ward.

The BHCPF is expected to fund delivery of the minimum package of healthcare service to Nigerians, especially the poor and vulnerable. At least, one percent of the consolidated revenue fund is dedicated to the fund, among other expected domestic and foreign support.

The fund has four gateways: 50 percent would be used to finance the basic minimum package of health services by the National Health Insurance Authority (NHIA); 45 percent would go through the NPHCDA to support primary health care systems and PHC facility operations; while 5 percent is for emergency medical treatments. The federal government recently announced the Nigeria Centre for Disease Control as a fourth gateway to strengthen states’ capacity to prepare and respond to public health emergencies.

Despite this, data from the ministry of health show that only 1,042,890 poor and indigent Nigerians out of the over 83 million identified vulnerable Nigerians have been enrolled as beneficiaries of a BMPHS provided through the NHIA, out of which 753,999 in 24 States are accessing care.

Speaking at the third quarterly Ministerial Oversight Committee Meeting of the BHCPF in August, the minister of health said many states are reluctant to meet the 25 percent counterpart funding as required by law. To access the BHCPF, states and local governments are required by the law to provide 25 percent of the cost of any project to be implemented with the BHCPF within their locality as counterpart funding.

The minister also decried the slow pace of implementation in some states as a result of non-completion of prerequisite activities, which include baseline assessment and capacity building. Osagie expressed concern over reckless and inappropriate financial practices in a few states.

So far, since the launch of the fund in January 2019, the federal government has released N85.95 billion, out of which N56 billion (65 percent) has been disbursed to the 36 states and the FCT.