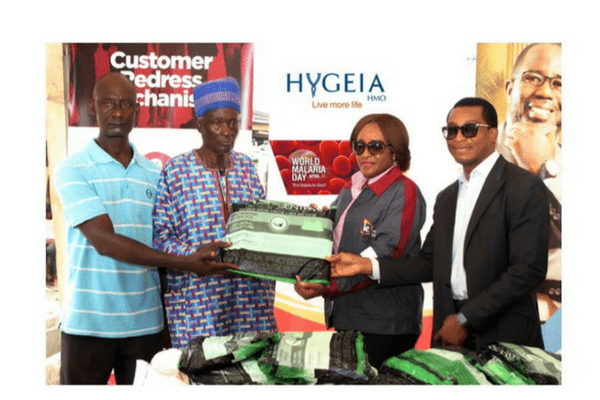 Share
As part of efforts to fight malaria scourge in the state and mark this year’s world malaria day, Hygeia, Nigeria’s foremost Health Maintenance Organisation (HMO) in collaboration with Ikeja Electric Distribution Company and Rotary Club have taken stringent measures to eliminate the incidence in some communities in Lagos State.
To mark this year’s world malaria day, with the theme ‘End Malaria for Good’ Hygeia partnered IKEDC to distribute treated mosquito nets in several communities in Lagos.
The communities includes: Ilaje-Bariga, Lambe-Akute, and Oke Agbo-Ikorodu, Aguda-Ogba in Ikeja and Akowonjo.
Also, malaria test was conducted for residence of the various communities and anti-malaria drugs were distributed to people who tested positive to malaria parasite. There was also an enlightenment session on the proper way to use the insecticide treated nets.
Part of the activities to mark the day, included malaria test for residents of the various communities, distribution of anti-malaria drugs for people who tested positive to malaria parasite.

There was also an enlightenment session on the proper way to use the insecticide treated nets medical personnel from Hygeia HMO.

Speaking at the event, Ekeno Eyo, the head of corporate sales, Hygeia HMO stated that the collaboration between Hygeia and Ikeja Electric was an innovative way of delivering more impact and value to the communities on health related matter especially as malaria infection ranked top of cases presented at the hospitals for care daily.
He added that, Hygeia HMO is focused on preventive healthcare and hence this collaboration on world malaria day was in line with that strategy which he believes will eventually reduce casualties resulting from malaria infection.