The bad state of public hospitals in Abia State and lack of encouragement from government have combined to kill the joy of health workers in the state, writes GODFREY OFURUM.

Health workers in public hospitals in Abia State have expressed worries over the poor state of infrastructure in general and cottage hospitals, which they said have not been renovated for 15 years.

Some doctors, who spoke with BUSINESSDAY, stated that government’s carefree attitude towards them and their welfare is also a cause for concern, especially with government owing them 13 months’ salary arrears.

BUSINESSDAY checks revealed that structures in most of the hospitals are dilapidated and not conducive to accommodate patients.

In Isiala Ngwa General Hospital at Okpuala Ngwa, which serves Isiala Ngwa-North and Isiala Ngwa-South Local Government Areas, the women and children ward is the only functional ward in the hospital and it was renovated and equipped, by MTN Nigeria.

The male ward is dilapidated and out of use and so the hospital has no facility to keep male patients.

The facility, which sees about 150 to 200 patients monthly, is understaffed with only 10 nurses, 1 pharmacist, 3 pharmacy technicians, 2 scientists, 3 general doctors and 2 ophthalmologists (eye doctors).

Consequently, the health workers in Isiala Ngwa general hospital work extra hours to ensure that their patients are well managed. 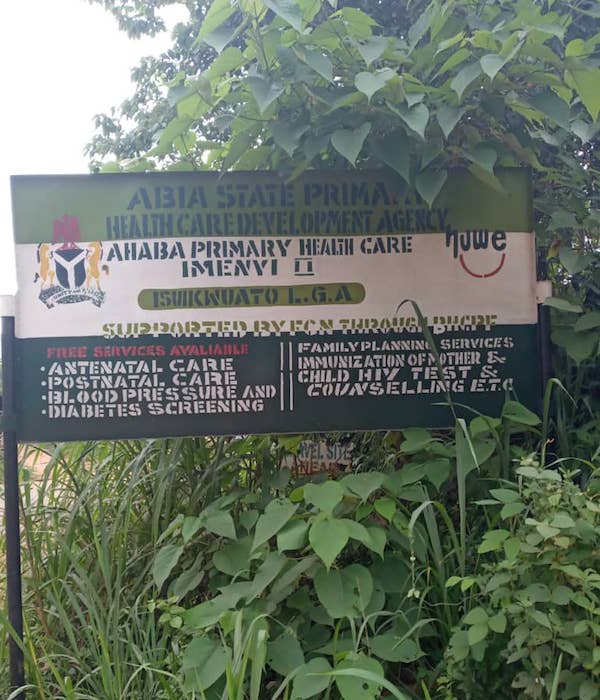 World Bank Housing Estate Cottage Hospital, Abayi, Aba is surviving on donations from corporate bodies and non-governmental organisations; however, most buildings in the hospital are dilapidated.

General Hospital Oke Ikpe in Ukwa West Local Government Area has been overgrown by weeds. This is even as the Obehie-Akwete-Azumini-Ukanafun highway, which leads to the hospital, is now a death trap.

Ahaba Health Centre in Isiukwuato Local Government is also in a bad state with just one medical personnel.

For Aba General Hospital, one of the biggest hospitals in the state, which was renovated in 2018, the kitchen and laundry departments are not running.

He stated also that the state government has not taken their safety seriously, especially under this period of coronavirus pandemic, in which they were not equipped to work.

According to him, out of six staff, who were supposed to participate in the Covid-19 training from the hospital, only one was trained.

“We received only five facemasks”, five bottles of what he termed as “local sanitizer”, packaged in small bottles and no hazard kits”.

He lamented that a hospital that serves Isiala Ngwa North and South LGAs and sees about 150 to 200 patients monthly, has only three doctors, 10 nurses, one pharmacist, two ophthalmologists and two laboratory scientists.

He stated that the state of the hospital affects both patients and staff as it does not allow them to observe shifts as should be the case with proper staffing.

“They slash our salaries, pay some staff and leave out some; there is no vehicle to move or bring patients.

“Even during the Covid-19 lockdown, we were all on duty and many of our staff without vehicles, were trekking to work.

“Another challenge facing us is that they have not been implementing our Consolidated Health Salary Structure (CONHESS), our male surgical ward and old maternity wards are in dilapidated state.

“We do not have an X-ray machine, no chemistry machines and no hematology analysers, no Personal Protective Equipment (PPE), no masks and no Covid-19 trainings for our staff; it is that bad”, he said.

Ukoh said if Abia government should set Aba General Hospital up and equip it appropriately, it would improve the lives of residents in the city.

Okeugo, who is Abia chapter chairman of the National Association of Government General Medical and Dental Practitioner (NAGGMDP), however, noted that some issues the government failed to attend to are troubling the system.

He observed that huge salary arrears owed medical staff in Abia is hampering progress and asked the government to pay them their 13 months’ salary arrears and other benefits.

Okeugo also lamented the imposition of non-career personnel at the leadership levels in Abia’s Health Management Board (HMB) as a problem, which needs urgent attention to save the system from collapse.

He also urged government to allow for career progression among the HMB staff to encourage accountability, healthy competition and hard work among them.