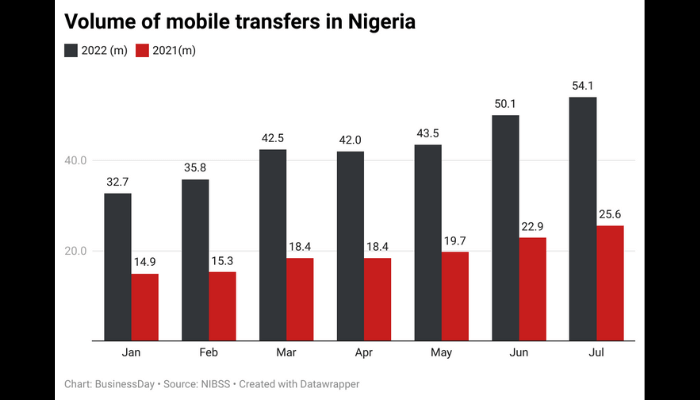 Within a period of one year, the volume of financial transactions through mobile devices has more than doubled, a BusinessDay analysis from the Nigeria Interbank Settlement System (NIBSS) shows.

“Nigerians are now shifting from cash activities to electronic payment systems and if you look at the telecommunications subscription, data subscription and usage, you will see that there is an increased usage of mobile phones,” Johnson Chukwu, the chief executive officer at Cowry Asset Management Limited said.

Data from the Nigerian Communications Commission shows that mobile network operators, comprising MTN, Airtel, Globacom, and 9mobile recorded a 11.2 percent increase in active subscriptions to 209 million in July 2022 from 188 million in the same period of last year.

Additionally, a 2021 Global Findex report by the World Bank stated that higher adoption of mobile money is driving the growth of account ownership in financial institutions particularly in Sub-Saharan Africa (SSA) countries like Nigeria.

“Mobile money has become an important enabler of financial inclusion in SSA especially for women as a driver of account ownership and of account usage through mobile payments, saving, and borrowing,” the report added.

Apart from mobile transfers, Point of Sales (POS) also followed the same trend as its volume in August 2022 amounted to 98.4 million, a 30.2 percent increase from what was recorded in the same period of 2021 at 75.6 million.

Also, the volume of Nigeria Instant Payment (NIP) platform transactions rose to 448.1 million in August, showing a 52.5 percent increase from 293.9 million recorded in the same period of last year. Its value increased by 50. 2 percent

Correspondingly, from the NIBSS data, the volume of cheque transactions fell marginally by 2.1 percent to 358.2 million from 366 million over the same period.

The surge is a sign that the country’s financial inclusion is improving as more people access financial services at the comfort of their phones, says Damilola Adewale, a Lagos-based economic analyst.

“Consumers are finding it easier, faster and more convenient to do transfers than going physically to the banks.”

A report titled ‘Instant Payments- 2020 Annual Statistics’ by NIBSS also stated that COVID-19 had changed the e-payments landscape, and hastened the adoption of instant payments as people switch to electronic channels for funds exchange.

In 2012, the Central Bank of Nigeria (CBN) introduced the cashless policy which was meant to curb excessive handling of cash and to curtail the volume of cash in circulation.

Over the years, NIBSS says Nigerian banks have exposed NIP through their various channels, including internet banking, bank branch, kiosks, mobile apps, USSD, POS, and ATM, to their customers.