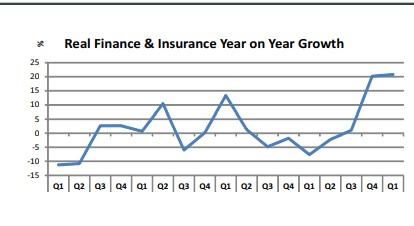 While many industries have been disrupted by the outbreak of coronavirus, Nigeria’s financial industry is one of the few that is less hit by the pandemic as the sector reported four-year high GDP growth in Q1 2020.

With a GDP expansion of 24 percent in the first three months of 2020, Nigeria’s financial institutions outperformed other sectors to emerge as the top-performing industry in Q1, data by the National Bureau of Statistics (NBS) on Monday shows.

On the factors that supported growth in the finance industry Ayorinde Akinloye, a research analyst at CSL stockbrokers said: “Banks continued to expand their loan books in the first 2 months of the quarter before the pandemic as they tried to meet the CBN LDR requirement.”

Meanwhile, in a bid to improve lending to the real sector of the Nigerian economy the Central Bank of Nigeria (CBN) for the second time, last year upwardly reviewed deposit money banks’ portion of minimum loanable deposits to 65 percent.

The decision, which is subject to quarterly review, was informed by appreciable growth in the level of the banking sector’s gross credit following the pronouncement of a 60 percent minimum Loan-to-Deposit Ratio (LDR) in July 2019 and the need to sustain the momentum, the apex bank said in a circular on September 30 2019.

Analysis of the 2020 first-quarter GDP report by NBS revealed that the Financial and Insurance sector grew by 13.19 percentage points year-on-year in Q1 2020. From a contraction of 7.60 percent in Q1 2019, the sector leveraged on contactless payment, increase in deposits and transactions to post a growth of 20.79 percent in the first three months of 2020, the fastest expanding sector in the review quarter.

The Finance and Insurance Sector consists of the two subsectors, Financial Institutions and Insurance, which accounted for 87.02 percent and 12.98 percent of the sector respectively in real terms in Q1 2020.

The Financial Institution sub-sector alone financial institutions was responsible for most of the sector’s growth as it reported a growth expansion by 33 percentage points.

Meanwhile, Nigeria’s big banks received a combined N16.22 trillion from customers through deposits across various account types in the first quarter of 2020 as business activities almost came to a halt due to the coronavirus pandemic.
The total deposit collected by the tier-one lenders in the review quarter was 12.72 percent above the N14.39 trillion recorded in the comparable quarter of 2019.

“With the COVID-19 epidemic posing significant concerns and online shopping becomes an increasingly attractive option for consumers. Ultimately this leads to increased E-Payments revenue for the banks,” a Lagos-based analyst said.

Among the electronic channels mostly patronised by Nigerians, Mobile payment and PoS recorded some of the highest revenue reported by Nigerian financial institutions in 2019.

According to the data by the Central Bank, the volume of transaction that was done through mobile payment was valued at N5.08 trillion while PoS posted N3.2 trillion in the same year.

A recent report by Quantum Metric, a SaaS platform provider shows the number of online shoppers increased 8.8 percent since the outbreak of coronavirus and led to a 52 percent surge in online sales as against the value reported a year ago.

The firm analyzed 5.5 billion anonymous and aggregated online and mobile visits to retailer websites from Jan 1 to Feb 29.

“E-commerce is expected to grow due to the virus outbreak,” Ibaru said adding that the growth of the e-commerce industry in Africa’s largest economy will also lead to an increase in the demand for last-mile warehousing.

According to consulting and research firm Technomic, 52 percent of consumers globally are avoiding crowds and 32 percent are leaving their house less often because of coronavirus.

While Nigeria is preparing to gradually re-open its economy, the social distancing recommendations by the Federal Government and health experts to contain the spread of the virus which has already affected more than 7,000 persons, is expected to fuel the surge in online and contactless transactions.

Meanwhile, before the virus outbreak, Nigeria’s e-commerce industry was described as one on a growth trajectory as McKinsey projected the size of the market to reach $75billion by 2025, N58 billion higher than the current estimate of over $17billion.

The expansion of the industry is buoyed by the country’s young population coupled with the mobile phone penetration estimated at 89 percent by Global System for Mobile Communications (GSMA).

According to the 2019 data by GSMA, 50 percent of the total 89 percent of mobile phone users in Nigeria have access to the internet.

With broadband of 40 percent Nigeria has about 184.4 million mobile phone subscribers as of December 2019, as compiled from data by Nigerian Communications Commission (NCC).

Nigeria’s growing cashless economy which began in Lagos in 2012 has since improved with digital payment and electronic banking implemented in phases across 27 states of the federation. This is another catalyst responsible for the growth reported by the country’s e-commerce industry, as compiled from industry sources.

Nigeria’s e-commerce industry which has some popular online stores like Jumia, Nigeria’s version of amazon.com, PayPorte, Deal Dey, Gloo.ng have also leveraged social media to onboard informal online owners who use Instagram, Facebook and Twitter their means of selling their products.

Reaching for the Cloud: Embracing Digital Channels in Cooperative Societies within…