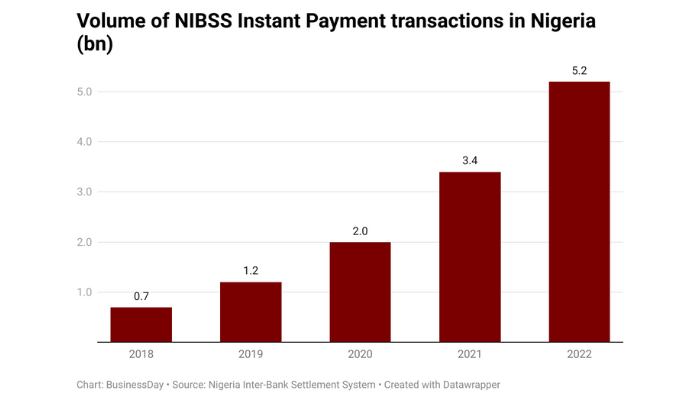 The volume of financial transactions performed electronically in Africa’s most populous nation surged to the highest in five years in 2022, according to new data from the Nigeria Inter-Bank Settlement System (NIBSS).

BusinessDay analysis of the data shows that the total volume of NIBSS Instant Payment platform (NIP) transactions rose by 613.1 percent to 5.2 billion last year from 729.2 million in 2018.

Analysts say the noticeable increase in electronic payments is not surprising given the rising teledensity rate and number of internet subscribers.

“The ease of the internet and electronic banking cannot be overemphasised, especially with regard to cost efficiency and effectiveness, despite the twin concerns of failed transactions and internet fraud,” Temitope Omosuyi, investment strategy manager at Afrinvest Limited said.

He said even though adoption was growing steadily prior to 2020, the year 2022 marked another phase of massive usage of e-banking following the restrictions on movement resulting from the COVID-19 outbreak.

“As more people have access to mobile phones, particularly rural dwellers, e-banking will continue to grow in leaps and bounds.”

NIP is an account-number based, online-real-time Inter-Bank payment solution developed in 2011 by NIBSS.

And according to NIBSS, it is the Nigerian financial industry’s preferred funds transfer platform that guarantees instant value to the beneficiary.

A recent report by ACI Worldwide ranks Nigeria in the league table of the world’s most developed real-time payments markets. The country ranked sixth behind South Korea, Brazil, Thailand, China and India.

“Nigeria is one of the countries for which real-time payments provide the biggest economic growth opportunities. Its transactions in 2021 resulted in an estimated cost savings of $296 million for businesses and consumers.

“This helped to unlock $3.2 billion of additional economic output, representing 0.67 percent of the country’s GDP,” it said.

The report projects that with real-time transactions set to rise to 8.8 billion in 2026, net savings for consumers and businesses are forecasted to climb to $2.3 billion.

“That would help to generate an additional six billion dollars of economic output, equivalent to 1.01 percent of the country’s forecasted GDP.”

PoS also followed the same trend as its volume increased by 22 percent to 1.2 billion from 982.7 million in the 2021. In terms of value, it recorded an increase rate of 31.3 percent year-on-year from N6.4 trillion to N8.4 trillion.

But the volume of cheque transactions fell by 9.8 percent to 4.1 billion from 4.5 billion over the same period.

More consumers are shifting towards the use of electronic banking channels for financial transactions, said Gbolahan Ologunro, senior research analyst at Cordros Securities.

“So, there is an increased use of digital channels for transactions and mobile payments,” he said.

A latest Mastercard survey said that 99 percent of Nigerians use digital channels such as banking apps and websites to make financial transactions.

This percentage makes the country to have the highest usage when compared with other Middle East and African countries like Kenya (87 percent), Pakistan (66 percent), Jordan (53 percent), Morocco (34 percent) and Iraq (27 percent).

“There is now a greater awareness of mobile money, combined with a broader diversification in its uses. Consumers are now more open to using mobile money for more than just transactions,” the report said.

The transition from the old naira notes to the new ones, which have started entering circulation, is spurring the use of electronic banking channels ahead of the expiration of the old notes by January 31, 2023.

A trader in Apapa told BusinessDay that customers that come to my shop no longer pay in cash; they prefer making transfers to me. “I always make sure I get an alert before releasing my goods to them.”

In 2012, the Central Bank of Nigeria introduced the cashless policy, which was meant to curb excessive handling of cash and to curtail the volume of cash in circulation.