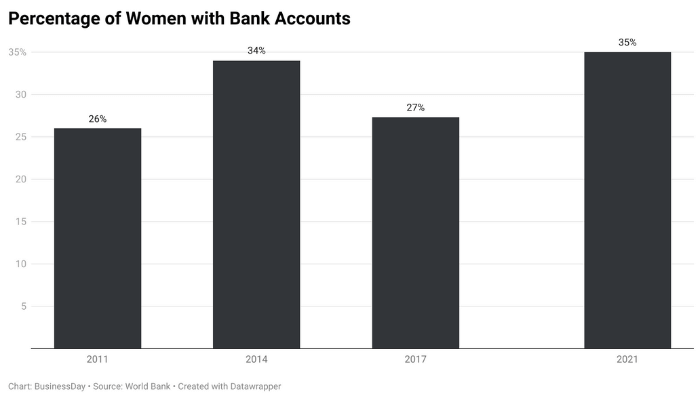 The percentage of Nigerian women with formal financial accounts in any financial institution has increased by nine percentage points to 35 percent in 2021, the highest in 10 years, a recent Global Findex report by World Bank has said.

According to the report, technology is helping to drive inclusive access to finance in Sub-Saharan Africa (SSA), especially for women.

“The spread of mobile money accounts has created new opportunities to better serve women, poor people, and other groups who traditionally have been excluded from the formal financial system. Indeed, there are some early signs that mobile money accounts may be helping to close the gender gap,” the report stated.

Also, when compared to men, Nigerian women still lagged behind as 35 percent of them with bank accounts is 21 percentage points lower than the 56 percent of men who have.

Across SSA, unbanked women are seven percentage points more likely than unbanked men to cite lack of a mobile phone as one reason they do not have an account, says the report.

“Another barrier is lack of identification. In Liberia, Mozambique, South Sudan, and Tanzania more than 40 percent of unbanked adults cited lack of documentation as a barrier. Benin, Burkina Faso, Côte d’Ivoire, Nigeria, Senegal, and South Sudan all have significant gender gaps corresponding to this barrier,” it concluded.

Similarly, David Malpass, president of World Bank Group noted in a recent blog that the gender gap in access to finance has narrowed, but it still exists.

“Women, along with the poor, are more likely to lack identification or a mobile phone, to live far from a bank branch, and to need support to open and effectively use a financial account.

“Policymakers will need to make additional efforts to include underserved population groups in the ongoing transformation.

Malpass recommended that financial education programs are among the tools to consider, and they are bound to be more effective if they involve peer-to-peer learning, for instance through women’s self-help groups.

“Beyond financial inclusion, we must equally prioritise economic inclusion, as one cannot exist without the other. Efforts must be made to address the major drivers of financial exclusion such as lack of income and economic capabilities, lack of education, and low trust in financial service providers,” Lawson said.

She noted that efforts to boost financial inclusion by policymakers and financial service providers must move beyond product innovation to address these underlying drivers of financial and gender gaps through more systemic collaborations between all stakeholders.

On the challenges faced by financially excluded women in Nigeria, Funke Fausat Olanrewaju, a trader for over 20 years said that financial services providers need to come to the level of the excluded women, and speak their language (in terms of their literacy levels), to be able to earn their trust and recruit them.

“There is so much that can be done with financially excluded women. However, I believe that the starting point is to meet them where they are, constantly engage them in ways they prefer and understand and reduce the barriers they face including opening an account or even accessing loans.”