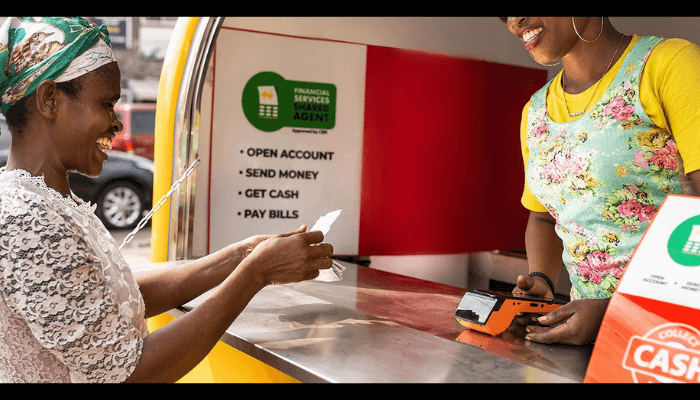 The number of registered mobile money agent outlets per one thousand square meters in Nigeria has increased by 380.2 percent to 680.9 in 2021 from 141.8 in 2020, a BusinessDay analysis of a recent International Monetary Fund (IMF) survey.

The IMF’s Financial Access Survey is a unique supply-side dataset that enables policymakers to measure and monitor financial inclusion and benchmark progress against peers.

Launched in 2009, the survey is based on administrative data collected by central banks or financial regulators from financial institutions and service providers.

“They are bringing those who are not financially included into the net by opening accounts for them and also embarking on financial transactions for them,” said Ojo.

“In addition, this can be used to bring more people into the tax net. And most importantly, this will enable people to put their finances in proper shape while it can be used to access borrowings to improve their businesses,” Ojo added.

Similarly, Gbolahan Ologunro, a senior research analyst at Cordros Securities noted that the increase is consistent with the explosion that is currently happening in the financial technology (fintech) space.

He adds, “The traditional banks have also explored the fintech space by establishing subsidiaries to carry out activities that a typical fintech company would normally carry out.”

The agents, both men, and women are equipped to carry out services that include account opening; cash deposit; airtime purchase; bills payment; withdrawals, and money transfer.

“Mobile money has several features that can support undisrupted financial transactions during the COVID-19 pandemic, especially in developing economies,” analysts at IMF said.

They highlighted three benefits of mobile money as high levels of market penetration in many low- and middle-income economies, transactions are carried out with minimal physical contact, and that it has high levels of usage among the unbanked and underbanked, making it a key mode of using financial services for the most vulnerable parts of the population

And in 2018, the apex bank set up the shared Agent Network Expansion Facility to recruit, train and support more people to become agents. The Facility also provides funding to companies, incentivizing them to expand agent networks in underserved cities across the country.

Recently, a 2021 Global Findex report by World Bank stated that the higher adoption of mobile money is driving the growth of account ownership in financial institutions particularly in Sub-Saharan Africa (SSA) countries.

The report titled ‘Financial Inclusion, Digital Payments, and Resilience in the Age of COVID-19, showed that Nigeria’s banked population increased by 15.6 percentage points to 45.3 percent in 2021, the highest in 10 years from 29.7 percent in 2011.

“Mobile money has become an important enabler of financial inclusion in Sub-Saharan Africa, especially for women as a driver of account ownership and of account usage through mobile payments, saving, and borrowing,” the report stated.

Apart from improving or increasing financial inclusion, the increased adoption of agency banking has also been an enabler for creating employment opportunities in developing countries especially Africa’s biggest economy where unemployment is estimated at 33.3 percent as at 2020.

The opportunity to make an additional income is a major motivation for becoming an agent, a 2020 Enhancing Financial Innovation and Access (EFINA) agent survey stated.

“Agents surveyed are signed up by different principals/service providers. Nevertheless, First Bank (First Monie), OPay, QuickTeller, and MTN top the list of principals with a majority share of agents.”

Globally, agency banking is recognized by policymakers, researchers, and development agencies as a financial inclusion initiative that has remained an integral tool in developing economies, particularly in the areas of poverty reduction, employment generation, wealth creation, and improving welfare and general standard of living.

Ologunro said, “Beyond helping in terms of access to data, it also helps policy makers to use that data in order to assist in policy marketing and can help improve the well-being of people.”