The global oil market is currently in turmoil on the heels of dwindling demand for crude oil brought about by the coronavirus pandemic.

For several decades, Nigeria lived off the energy sector without consciously using the gains thereof to develop other industries including most of the country’s indigenous oil and gas firms.

Considering Nigeria’s reliance on the oil and gas industry, one would expect that the Federal Government through the CBN would do everything to salvage the country’s independent crude producers, firms which between them pump about 10 percent of national output, failure of which risks inflicting severe pain on the local banks that finance them.

Now, with a sharp drop in oil prices, thanks to crashed global demand, the government is conducting a hasty interventionist surgery to revamp some of the industries it scarcely paid attention to over the years.

So far, the Central Bank of Nigeria (CBN), who is taking the lead in the administration of the fiscal intervention programme narrowly focused attention on four areas namely the small and medium scale enterprises (SMEs), the health and pharmaceutical industries, the manufacturing industries and the transport industry. N50 billion, N100 billion, N500 billion, and N15 trillion fiscal transfers will go to these sectors respectively between now and the next 36 months.

Unfortunately, they forgot to include the oil sector, which is the goose that has been laying the golden egg for the country’s growth and survival for decades.

But the pattern of intervention in many other oil-producing countries ensured that the upstream segments of their oil industries are alive and well. For instance, Russia permitted the delay in dividend payments for the state-controlled Gazprom and Rosneft.

In addition to that, the country is working out a plan to compensate oil companies for shortfalls suffered in export revenue since the crises began.

Donald Trump’s USA is equally determined to bail out the struggling shale gas companies. The Canadian government has also promised to extend bailout credits to all the oil companies that are perceived to be on life-support. It also gave generous tax relief to the industry as well as suspended the fees typically collected by the sector regulator. Nigerian government’s foot-dragging in immediately intervening in the upstream segment of the oil and gas may orchestrate more disaster than good.

Nigeria’s oil sector has always been the driver of its prosperity and will likely remain so for a few more years to come. With less than 10percent contribution to national output, it is the source of about 90percent of its foreign exchange. With its contributions of more than two-thirds of the federal government’s revenue, it is the primary gauge for its budgets. But it is not only that; the upstream segment of the oil sector boasts of a very long chain of embedded services that umbilically derive economic life from its continued existence.

In this list are construction engineers, health and safety organisations, training and consulting firms, lawyers and a host of other dependent industries. The local content policy amplified this dependency and created far-reaching skill development as well as job opportunities for the Nigerian people. 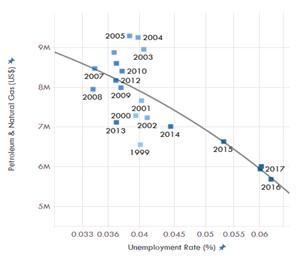 Figure 2 shows the strong relationship between the contributions of the oil and gas sector to unemployment reduction.

Without a deliberate intervention in the participation of local players in the upstream oil sector, we stand to lose much of these employment gains. Local players in the upstream segment of the oil and gas sector do not possess the same capacity and leverage as their foreign counterparts in accessing global finance. It is even worse now when virtually every country in the world is concentrating on saving its people and economy.

The oil demand collapse mingled with fierce price wars and the consequent oil supply glut deliver the most damaging punches on the industry’s survival. It all started with a virus that kept economic activities and oil usage on some level of lockdown.

No one can predict with certainty when the crisis would be over, except if there is a vaccine that restores confidence in human agents to recommence their activities. Give or take, the 12-month horizon might be a reasonable guess for the restoration of normalcy.

Until then, it does not appear as if oil prices will bounce back to its pre-virus time. This situation is even more devastating for the Nigerian upstream oil industry, whose cost of production has made it difficult to sell at the international market. Nigeria’s cost of producing a barrel of crude oil is $30.

Low-cost producers such as Saudi Arabia, Kuwait, Iran, Iraq and Russia are locked in in a fierce battle to sell their oil and are offering discounts of up to 30percent on the current price of oil. As if that is not enough, the industry is heavily indebted to the Nigerian banking sector who are bent on recovering their loans regardless of the crisis. But that should be expected because the Nigerian banking sector concentrates over 25% of its balance sheet in the oil and gas sector.

The crisis, therefore, is a two-edged sword ready to destroy two of the most critical industries of the Nigerian economy. Many of the local players in the oil and gas sector who understandably depend on commercial bank financing are already defaulting. Since February, many of the local players have defaulted on their interest payments. This trend of defaults is not likely to be wished away unless the government takes accurately measured steps to save the industry.

The depth of the symbiotically knotted relationship made both sectors share prosperity in booms as well as penalised likewise in crisis together. Many pieces of evidence from robust scholarly research showed the interdependency in the profitability performance of the two sectors.

Similarly, banking industry data between 2007 and 2019, show that banks’ liquidity position on average appears to improve by 45percent for every 1percent increase in the crude oil export price, while, a 1percent increase in crude oil price leads to about a 67percent drop in the banking industry non-performing loans on average. It is a relationship that supports each other and by so doing, enables the broader economy to function much better.

At present, almost one-third of the entire banking industries loan exposure is to the oil and gas sector. More than 90percent of the threatened ones are in the upstream sector, particularly those firms owned by Nigerians. (See figure 5).

In the past two years, GT Bank appears to have exhibited the highest appetite for granting oil sector credits. In 2018 and 2019, 37percent and 40percent of its loan exposures respectively were to the oil and gas sector.

Although GT Bank is not alone in this, it has nevertheless recorded fantastic average improvements in its asset quality since 2009. In 2019, the credit exposures of Zenith Bank, FCMB, First Bank, Union Bank, Sterling Bank and Access Bank to the oil and gas sector all exceeded 25percent of their total loan portfolio.

That noted the average asset quality of Tier-2 banks strongly and inversely correlate with crude oil prices. Union Bank and Wema bank strongly exhibit this pattern regardless of the efforts of the former to whittle down its exposures to the oil sector.

There is, therefore, an urgency to save both the Nigerian upstream oil and gas players and the many banks supporting them from sinking. Not intervening now in the industry may result in the crash up to 40percent of the activities taking place in the long stretched industrial chain of embedded services that are umbilically surviving on the sector.

The future of the oil and gas sector in Nigeria remains bright. The Nigerian upstream oil sector is still firmly the enabler of our economic growth and prosperity. Anticipated successes in economic diversification are prospectively ascribable to the income from the sector.

Therefore, its survival remains essential for sustaining and nurturing other industries and the economy as a whole. Beyond crude oil exports, the industry is capable of providing several other ex-portable intermediate products which are also critical for the growth of our domestic productions. It is therefore essential to interpret the current market hiccup correctly as a temporary and regular business possibility. Force majeure can always set markets and industries temporarily back. That, however, does not imply that such sectors should not be supported.

The failure of the government to urgently draw up a Marshall plan to save the local participants in the upstream oil sector will deal a terrible blow on the domestic content policy. It will, in effect, set the policy back by up to two decades. As we all know, the policy in the oil and gas sector is the most strategic boost to our country’s repossession of some measure of control of our naturally endowed treasure.

Not only did it raise increasingly more local investment participants, but it also presented itself as the best platform harvesting the skills and employment potential of millions of people working in the value chain.

Table 1 shows the positive effects of the local content policy on the size of small and medium scale enterprises in the oil industries in Nigeria. Based on 2.5 cut-off criterion (see table 1), the entire industry workforce seem to agree that the policy enhanced more contract award to indigenous SMEs, created more jobs and generally increased opportunities for SMEs to play in the industry.

Although it is not necessarily within its purview, the CBN has always led in the provision of strategic interventions in shocks of this nature. Most of its focus much of the time was the salvation of the banking sector. In the 2015 – 17 crisis, the CBN focused on the moderation of imports to save the naira currency. Consequently, there were restrictions on the import of goods that we can produce within the country. It also placed some banks – for example, Skye bank – under interim management because of the severity of its exposure. There were also several other intervention measures and palliatives. Still, none focused on the survival of the upstream segment of the oil sector that received the first hit with the depressed prices. Local players in the industry were naturally worse off and had to recuperate on their efforts. Yet, they remained resilient in their push to survive that crisis without any support from the government. Now they are struck again by an even greater disaster. Will the CBN remain aloof? Doing so will only make matters worse. Also, as at that, what is good for the goose is equally suitable for the gander. Concessions and other forms of financial support from the government at this time are desirable for all critically affected sectors, including the upstream oil sector.