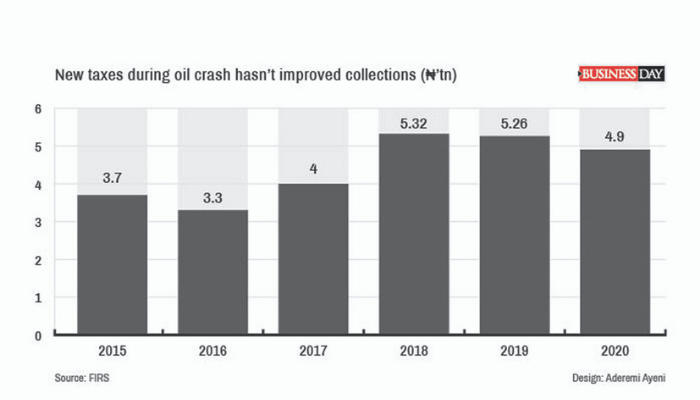 Nigeria’s tax administration is not proactive, hence when oil prices fall, the government aggressively pushes to collect more taxes which, to taxpayers, feels like a shakedown, writes ISAAC ANYAOGU.

On January 15, 2016, the Central Bank of Nigeria ordered all Deposit Money Banks (DMBs) and other Financial Institutions (FIs) to charge N50 as stamp duty on all receipts issued in acknowledgment of services rendered in respect of electronic transfer and teller deposits from N1,000.

The CBN’s directive was part of the Federal Government’s efforts to boost revenue collection in the non-oil sector following the crash in oil prices and reduction in related oil sector receipts.

The term fire-brigade approach is uniquely Nigerian, borne out of the reality that the fire service responds after a building has been burnt. It is used to capture a public service attitude to waiting for the last minute before taking action, inability to be proactive, responsive, and efficient.

The administration of Nigeria’s tax laws often feels this way. A crash in oil prices triggers a rash of new tax laws or manic enforcement of those already enacted but ignored for decades. This results in enforcement at a difficult time and leaves taxpayers feeling they are being cheated.

When the Stamp Duty directive was issued by the CBN, Nigerians were already dealing with an economy slipping into recession. By the second quarter of 2016, the economy was shrinking by 0.36 percent before it contracted by 2.06 percent in the second quarter.

But the Stamp Duty Act is not a new law. It’s been in the books even before Nigeria attained independence in 1960. It was officially introduced into Nigeria by the British colonial government through the Ordinance 41 of 1939 and was later formalized as the Stamp Duties Act No. 5 of 1939 (SDA or the Act) which commenced on April 1, 1939.
Prior to the CBN directive, many people were unaware of its existence including business people, accountants, tax consultants, and even the tax authorities. Beyond enforcement in matters related to the registration or authorization of companies’ share capital, land title documents, and to present documents as evidence in legal trials, it was largely ignored.

Read Also: CBN’s cryptocurrency ban: What Emefiele must know about the history of money

An economy in recession, oil prices tumbling, resurging militancy in the Niger Delta costing an estimated $29 million daily formed the backdrop for the review of a 77-year old law!

Predictably, this directive enraged Nigerians. There were arguments about whether stamp duty will be charged on every N1000 per deposits above N1000 or a flat rate of N50 on deposits above N1000. Will savings accounts be exempted? Reservations boiled over and various banks challenged the validity of the directive in Court.

Nigeria’s tax administration also suffers from inconsistency in the application. In February 2017, the Federal Executive Council, the highest executive decision-making organ in Nigeria, approved a National Tax Policy for the country. It was endorsed by the National Economic Council making it applicable to all tiers of government.

The National Tax Policy (NTP) provided the fundamental principles that will guide an orderly development of the Nigeria tax system and reinforced the need for tax laws and administrative practices to promote economic development.

The policy was to address key challenges confronting the Nigerian tax system including low tax to GDP ratio, a fragmented database of taxpayers, and weak structure for the exchange of information as well as multiplicity of taxes and revenue agencies. Its most important recommendation was to ensure that there is only one revenue agency per level of government.

Yet, at the first sign of a fiscal crisis, the government ignored these principles. For example, in March this year, a euphoric, Isa Pantami, minister of communications and digital economy, gleefully announced that the Nigeria Postal Service (NIPOST) has reclaimed the collection of stamp duty charges from the Federal Inland Revenue Service (FIRS).

“NIPOST has been recognised as a government agency with statutory and historical authority to be the producer of stamps and recognised for collection of stamp duties for validation of financial transactions in the country,” Pantami said.

But analysts say this does not only negate the core principle of the 2017 National Tax policy, it further multiplies tax collection agencies in Nigeria.

“The 2017 National Tax Policy prescribes only one tax agency per level of govt. Replicating tax collection structures promotes inefficiency that only makes us poorer as evidenced by our very high cost of collection compared to 1 percent global benchmark,” Taiwo Oyedele, Tax Partner at PwC Nigeria, said in a tweet.

Oyedele has argued that in the spirit of this policy, the Nigeria Customs Service should be merged with the FIRS as is the case in the UK, Ghana, and South Africa.

Meanwhile, this order is coming at a time when the FIRS had committed resources to developing and defending elaborate rules on implementing the stamp duty act. The FIRS had created its adhesive stamp to obviate reliance on NIPOST postage stamp and was slugging it out with NIPOST at the courts.

In the midst of this, the 2020 Finance Act has modified section 89(3) of the SDA to remove electronic transfer from the scope of stamp duty and introduced an “Electronic Money Transfer” levy, which is applicable on electronic receipts or electronic transfer for money deposited in a financial institution, on any type of account. The applicable levy is N50 on any transfer of N10,000 or more.

The Minister of Finance is required to make regulations for the administration of the EMT Levy after receiving the necessary approvals from the National Assembly. The revenue collected from the EMT levy is to be shared based on the derivation of 15 percent to the federal government and the FCT and 85percent to the states.

NIPOST’s victory now seems pyrrhic even though it has increased tax collection agencies creating room for more leakages and further makes doing business difficult.
Government agencies invest more brain capital in internecine wars over the right to collect taxes at the expense of effectively improving the framework for tax administration.

This fire brigade taxation is replicated in another directive by President Muhammadu Buhari to the Minister of Finance Budget and National Planning and the FIRS to remit a quarter percent of the levy on turnover of firms earning N100million or higher, and one percent of the Federation Account in the first instance and two percent later to the National Agency for Science and Engineering Infrastructure (NASENI)

The decision to activate a dormant provision in the 29-year old law was based on the president’s desire for a home-made helicopter.

According to the NASENI Establishment Act 2004, a quarter percent of the levy on turnover, collected by the FIRS, should be remitted to the agency, in addition, commercial companies with a turnover of N100m will remit a percentage of their turnover to the agency.

Previous administrations have refrained from implementing this provision because companies are already overburdened with Companies Income Tax, VAT, Education Tax, NITDA levy, and others, even as the government continues to create new ones in response to declining revenues.

By 2019, Nigeria was in the midst of a revenue crisis precipitated by a crash in oil prices. Foreign and domestic debts had risen to over $81.27 billion (N24.947 trillion) as of March. The government revenue to debt service ratio was put at over 70 percent.
The Federal Government began foraging for money through debts, even issued a query to the FIRS for not meeting its revenue targets. It raised taxes and aggressively enforced tax payments, ordering banks to shut accounts of defaulters.

However, this raft of new taxes felt like a shakedown of citizens and businesses and actually did little to raise revenues. Collections were lower in 2019 than the previous year and were even worse in 2020. Rather it weakened income for individuals and revenue for firms and businesses triggering unemployment and lower tax revenues for the government.

For tax administration to improve, “Government must prioritise the removal of pain points of existing compliant taxpayers and ensure the economic benefits of paying tax are delivered to taxpayers and citizens at large,” said Adeniyi Adeyemi, a senior associate with KPMG Nigeria, and Adedapo Adeduro, a semi senior Associate of the same firm in a note.

The fire-brigade enforcement of tax laws is unsustainable, blinds the government to other revenue-generating endeavours like selling dead assets and improving non-oil sectors of the economy.