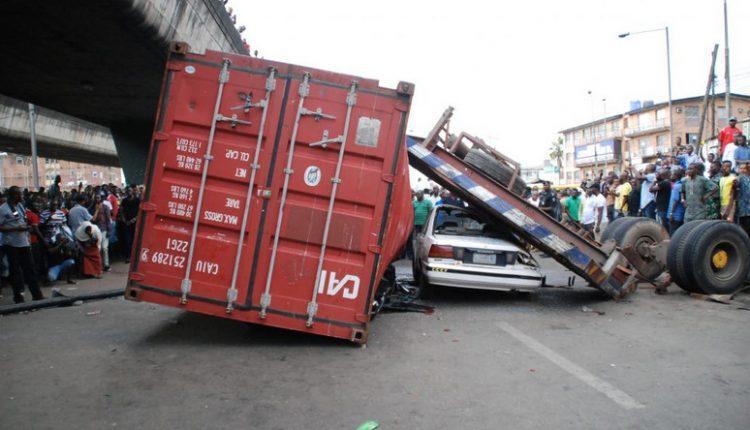 On that fateful Sunday evening, July 26, 2020 in Lagos, Nigeria a 27-year-old Chidimma Deedee Ajoku, who until her death was a staff of Federal Airport Authority of Nigeria (FAAN), sadly met her sudden death together with her colleague, a 29-year-old Chima Nnaekpe, after a container fell off its truck and landed on the commercial bus they boarded, and snuffed life out of them.

According to report, both Chidimma and Chima were on their way home from work when a truck, with number plate, SGM 715 XA, loaded with a 20-foot container, fell on their bus at Ilasamaja bus-stop on the Apapa-Oshodi Expressway in Lagos State.

Three other passengers in the bus sustained several degrees of injuries and were rushed to the General Hospital lsolo for treatment while the corpses of Chidinma and Chima were deposited at a mortuary for post mortem examination.

On the other hand, the driver of the commercial bus, Daniel Okwoje, who sustained injuries, died later in the hospital.

It was also reported that the driver, whose truck caused the sudden death of both Chidimma and Chima took to his heel after the accident occurred.

Hakeem Odumosu, Lagos State Commissioner for Police, who spoke to newsmen on a later date, disclosed that the truck driver, Okanlawon Sadiq who fled the scene of the incident, was arrested by a team of detectives from Ilasamanja division on August 7.

He however warned operators of containers to comply with safety rules especially latching their containers or face the full weight of the law.

BDSUNDAY understands that the truck driver was driving recklessly when the unfortunate incident happened.

There has been an increase in the number of crashes involving unlatched containers falling off the flatbed trailers carrying them, causing permanent disabilities or deaths to Nigerians.

Aside from the death of these two, many Lagosians have lost their lives or badly injured by rampaging container carrying trucks going in and out of Ports in Lagos, Apapa and Tin-Can Island Ports.

Pundits believed that many of these accidents could be attributable to the recklessness of the container truck drivers especially those of them that drive against traffic or caused by the bad state of the roads in the city of Lagos.

Today in Lagos, trucks, containers and tanker trailers lay siege to almost all the roads in Lagos that have connection with the seaports. In most cases, these articulated vehicles constitute nuisance to Lagos dwellers especially those whose offices or houses are situated around areas like Apapa-Oshodi Expressway, Ajegunle, Awodi Ora and Wilmer roads in Ajegunle; Kirikiri; Lagos-Badagry Expressway, Orile Igamu; Second Rainbow down to Apple Junction; Ago Palace Way; Ikorodu road; Ijora; Eko Bridge and among others.

Sadly, some of these container-bearing trucks are at rickety state and they carry unlatched containers waiting to fall and kill innocent dwellers. These containers are placed on flatbeds with no fittings to prevent them from sliding off in case the truck suddenly enters portholes.

BDSUNDAY can recall that on July 8, 2017, the city was thrown into mourning when reports filtered in that at least five people lost their lives after a truck carrying a 40-foot container laden with plywood fell on commercial bus in Ojota area of Lagos.

The accident, which occurred at the early hours of that Saturday at about 4:20am, had about eight passengers onboard.

In January 2017, the picture of a young lady whose legs were trapped under a container at Durbar bus stop along the Lagos-Badagry Expressway trended on the social media.

The lady was reported to have been moved from under the container by a passer-by, who had to chop off her legs from the knees, so she could be taken to the hospital but she unfortunately bled to death minutes later.

On September 8, 2015, Lagos residents witnessed the ruthless death of a middle-aged man, who was crushed to death by a container-laden truck on top speed as the man tried to cross Okoduwa Street, in Kirikiri Industrial Layout.

Also, on September 2, 2015, another unfortunate accident occurred at the Ojuelegba area of Lagos when the life of a Bureau de Change operator and his friends were terminated when a 40-foot container fell off the bridge, and landed on their black Toyota Sports Utility Vehicle.

On June 27, 2015, Olabisi Onabanjo University was also thrown into mourning due to the sudden death of 14 students involved in a fatal accident at Ilisan Remo, close to Sagamu, Ogun State, when a container fell on a bus conveying them to Lagos.

On April 5, 2015, another container crushed four persons by Agric bus-stop on Ikorodu Road in Lagos.

Also, in January 2015, a middle-aged woman named Anthonia and her son, Chibuzor, were crushed to death after an unlatched container fell on them by Ketu bus-stop, where they waited to board a vehicle to Mile 12.

On June 7, 2013, a man was crushed to death by a container at Ikeja-Along bus-stop, while a loaded 40-foot container fell on a meat van, and crushed a passer-by and injured several others on the Lagos-Abeokuta Expressway.

Eunice Ezeoke, president, Women’s International Shipping & Trading Association (WISTA), who expressed concern over the incessant container accident in the state, said the deaths are increasing in torrential numbers as every other day.

“Most of these containers are usually tilted to one end and not properly fastened, while some just sit dangerously threatening to slide off when the truck attempts to climb a slope or is driven through bad roads in Lagos,” Ezeoke said in a statement released to the media.

According to her, Lagos residents wake up to the gory sight of mangled bodies trapped underneath the crushing weight of container-laden trucks.

While pointing out the need for law enforcement agencies to effectively enforce safety regulations on container-carrying trucks, Ezeoke called for quick completion of the ongoing repairs on most Lagos roads.

“The Lagos State Government should ensure strict enforcement of the Lagos State Road Traffic Law 2012, which restricts articulated vehicles from plying the metropolis between the hours of 6am and 9pm. It should through its Ministry of Transportation put in place strategies to monitor activities of drivers of articulated vehicles, including a special enforcement squad to monitor their movement and impound rickety trucks at the exit points of the ports,” she suggested.

Continuing, she suggested that “Penalties and sanctions for noncompliance should be enforced as a deterrent to drivers of such trucks or trailers. They should be prosecuted for criminal negligence and gross dereliction of responsibility when arrested during the restricted hours and after causing deaths.”

Within the port, Ezeoke stated, the Nigerian Ports Authority (NPA) must ensure that before a container-laden truck leaves the port, the physical conditions must be assured through appropriate latching of the container.

“Also, enforcement agencies and relevant regulatory authorities and operatives like the FRSC, Vehicle Inspection Service (VIS) and Lagos State Traffic Management Authority (LASTMA) that are statutorily charged with the responsibility of ensuring safety on our roads should always check trucks that are not road worthy. They should mandate all articulated vehicles to have pointers, brake, rear lights, C-caution and among others and must stop underage motor boys and apprentices from driving trucks,” she advised.

Meanwhile, in what seems like effort in the right direction, Hadiza Bala Usman, managing director, NPA has said that the authority is working with the Federal Road Safety Corp (FRSC) to set up a task force that would monitor trucks carrying containers with a view to ensuring that unlatched containers are not allowed to move on the highway.

Usman, who spoke during the recent meeting of heads of maritime agencies, said that most of the trucks leaving the port usually have their containers latched but the truck drivers deliberately unlatch them when they leave the port in a bid to save their vehicles in case of an accident.

“The latching of containers is usually done in the port under the supervision of terminal operators and the NPA. Some truck drivers upon leaving the port now unlatch their containers because they are concerned about the truck overturning with the container when it enters a pothole or trying to traverse a corner. When the container is latched onto the truck, it can overturn with their trucks, so they will rather allow the container overturn itself rather than with the truck,” Usman explained.