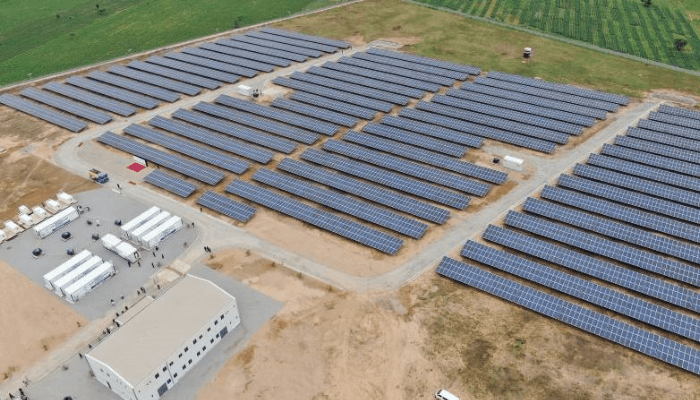 The rows of newly constructed hostel buildings donning both sides of the road in Ifite, laden with vehicles competing for right of way with angry Okada riders and a number of young people briskly walking towards the imposing red gates, complete the welcome parade to a university named for one of Nigeria’s founding fathers.

The Nnamdi Azikiwe University (NAU), located in remote Ifite Ogwari, 57 kilometers away from Akwa, the Anambra state capital, like other universities, is sited outside the city center to quicken the pace of development given their ability to attract businesses hoping to serve the student and staff population. In NAU, new money into Awka is animated also by the promise of more school enrollment buoyed by uninterrupted electricity supply in the school.

As part of the Federal Government’s green bond-funded initiative implemented by the Rural Electrification Agency (REA), NAU was selected as one of the schools to benefit from its Energizing Education Project. 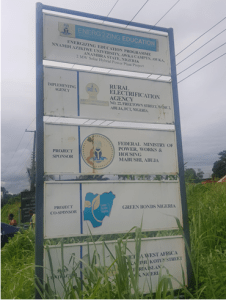 In NAU is an operational solar-hybrid plant with 2MW solar PV capacity and comes equipped with a diesel backup system built at the cost of N3.5billion (N3.1bn has been disbursed to date).

The Nigeria Sovereign Green Bond is a financing mechanism to facilitate and assist the country in meeting its Nationally Determined Contributions (NDCs) target under the Paris Climate Accord.

“Emerging economies don’t have enough of this capital and international money is often too risk averse to go into green projects in developing countries, especially in Africa,” said William Brent, the chief marketing officer of Husk Power Systems, and climate solutions expert.

The Department of Climate Change, under the Environment Ministry has said projects funded from the proceeds of the bond provided clear and quantifiable environmental benefits, possessing linkages with key targets in the Nigeria’s NDCs.

In 2017, the Federal Government issued its first Sovereign Green Bond to the amount of N10.69 Billion. The second Green Bond was issued in 2019 and generated N15 Billion.

Brent counsels that green bonds need to be combined with a credit enhancement guarantee of sorts to become viable for foreign investors. “This is where governments should apply their focus and public funds,” he said.

Impact
Five months after the facility came into operation, BusinessDay visited to assess what impact it is having on the community. 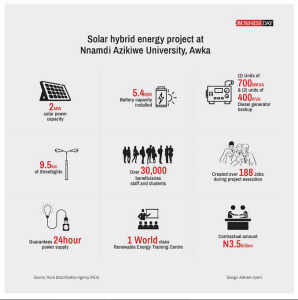 Ranked one of Nigeria’s top 20 universities by Webometric Ranking, NAU has about 40,000 students including 25,000 undergraduates and 15,000 postgraduates, according to data on the school’s website.

The university was taken over by the Federal Government as the first non-residential University in the country from 1992. It’s main campus is situated on 502 hectares, along the Enugu to Onitsha expressway.

The plant which began operations in April is having an out-sized impact on the lives of people within and outside the university.

Following an energy audit, a 2MW solar hybrid plant was proposed to provide 10-12 hours of supply to the university depending on the energy load and sunlight with diesel generators augmenting the rest.

Now, diesel generators run between 6am and 8am on most mornings before sunup while solar power lights up the school during the day and batteries provide illumination at night, helping to cut carbon emissions. It is on course to remove an estimated 76,140.87kg of C02 in a university that hitherto ran on diesel generators over 18 hours daily.

In the design, every building connected to the university’s distribution network such as classrooms, learning facilities, administrative blocks, laboratory, library streetlights, training and business centers were included.

“The challenge was that the University’s energy load became more than the plant capacity,” said Kalu Okwara, the site engineer. “So this led us to begin isolating the not-so- important sections from the load.”

As new structures were built, some administrative buildings and business centres were disconnected from the system to manage the load.

Okwara estimates that the project powering over 85 percent of the school facility has slashed electricity spend by over 90 percent. The exact figures could not be ascertained but for context, consider that the Obafemi Awolowo University spends 80million every month on electricity bill and buys N2million worth of diesel every month.

Vincent Aghara, a lecturer at the Department of Marketing in the school told BusinessDay that his faculty was exempted, and have had to rely on supply from Enugu Electricity Distribution Company (EEDC) which is frequently infrequent but the plant is nevertheless beneficial in improving learning outcomes.

Though the project can be scaled, the engineer said he is not aware of such a plan at the moment. The priority of the government, he said, is helping other universities acquire similar capacity.

A student who only identified herself as Lillian said due to constant power, she and her colleagues are spending longer hours at the library and laboratory and their performance have improved.

“You can imagine how embarrassing it is to suspend a laboratory test because of power cuts. Now that’s in the past,” she said.

While the next academic year would be the best measure of the facility’s impact on academic performance, the improved conditions of learning facilitating longer study time, even lectures in the evenings, training facility for renewable energy and bright lights at night is having a positive impact on students and lecturers.

The facility also powers some commercial bank branches inside the school including Access, Guaranty Trust Bank, First Bank and United Bank for Africa.

Some of the bank officials who requested not be identified since they were not permitted to speak for the bank, said the facility has been ‘a game-changer’ helping to eliminate half of their operational cost hitherto spent on diesel.

“Our ATMs operate all day, all night, the issue is if the students have enough cash, not whether we have light,” a security guard said.

Some who operate business centers for printing, scanning and internet services allowed on the network say they previously get less than 5 hours of supply on most days from the EEDC and spent up to N2,500 daily fueling generators.

“Its been a long time we bought fuel here,” said a shop attendant who identified herself as Eunice. She also said that when it rains sometimes, supply doesn’t get up to 10 hours a day.

METKA, the strategic business unit of Mytilineos S. A, an industrial manufacturing group who is the project contractor is operating and maintaining the plant for one year after which it would hand it over to the school’s officials who are being trained to run it. 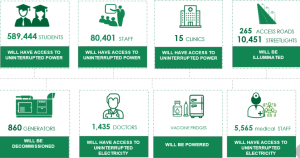 The government is banking on not just proceeds of the green bonds financing this dream but it is banking on the support of multilateral organisations and development financing institutions including the World Bank and the African Development Bank.

The goal is to replicate this success across other universities in the country. This will help Nigeria cut carbon emissions, improve learning outcomes in higher institutions and develop the burgeoning renewable energy industry.

It is also providing job opportunities for Nigerians as METKA has engaged hundreds of people on this project in four universities (Bayero University, Kano; Nnamdi Azikiwe University, Awka; Federal University of Petroleum Resources Effurun; and Usmanu Danfodiyo University, Sokoto). The bulk of the skilled and unskilled workforce was from the communities including bricklayers, carpenters, electricians.

It is also expanding gender inclusion as the company reported 40 percent participation of women in the project’s workforce.

Some of the impact already recorded at NAU is being replicated across other parts of the country where universities have been equipped to provide their own power.