At any time of the day, you see them scampering around in their numbers, happy to live among humans, it seems. Long ago, these hairy animals where seen once in a while on the streets, especially dark corners or around heaps of refuse, but these days, massive well-fed rats are seen strolling down the many streets in Lagos, a clear result from the neglect of the environment, which are paved with heaps of refuse.

On the other hand, swarms of cockroaches also compete with the rats in being more daring, as they are found in cars, on the main roads and every other place. Can it now be said that Lagos, the most populous mega city in West Africa and home to over 20 million inhabitants, is rat-infested and in dire need of rescue, asks OSA VICTOR OBAYAGBONA.

As the rainy season gains momentum in Lagos State, it has become a daily struggle for motorists, commuters and for pedestrians going through most major roads and streets. This is occasioned by the daily heap of garbage, rain waters that can not go into the drains due to the drains filling with excess refuse, push and disperse all over, floating and causing flood after every single rain drop. 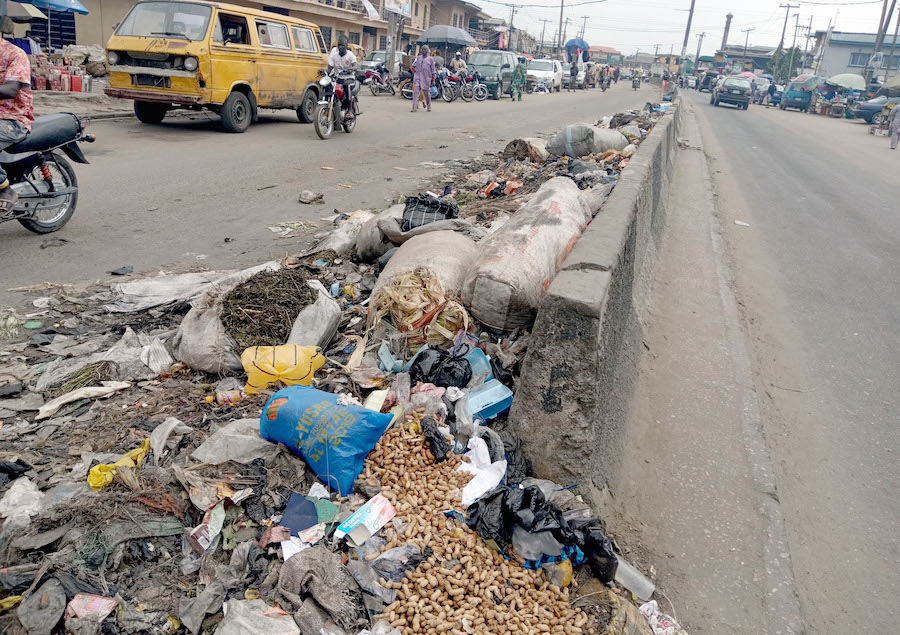 For motorists, finding the way through the heaps of pet bottles, unused household items, heaps of flies infested garbage with overfed rats strolling to and fro in them – even in broad daylight, and the drains swarming from sewage some notorious landlords stylishly connected to the main gutters, and the inevitable offensive smell you can not avoid, has become a sad experience many must go through daily.

On August 3, 2017, BusineesDay published a feature story titled: Death in a Mega City, which put the blame of the poor waste management in the state at the doorstep of the government. Today, the residents should take part of the blame, as a question I put up on Twitter – on issue of waste management: Government ineptitude or residential rascality? Most responses said, “Both.” 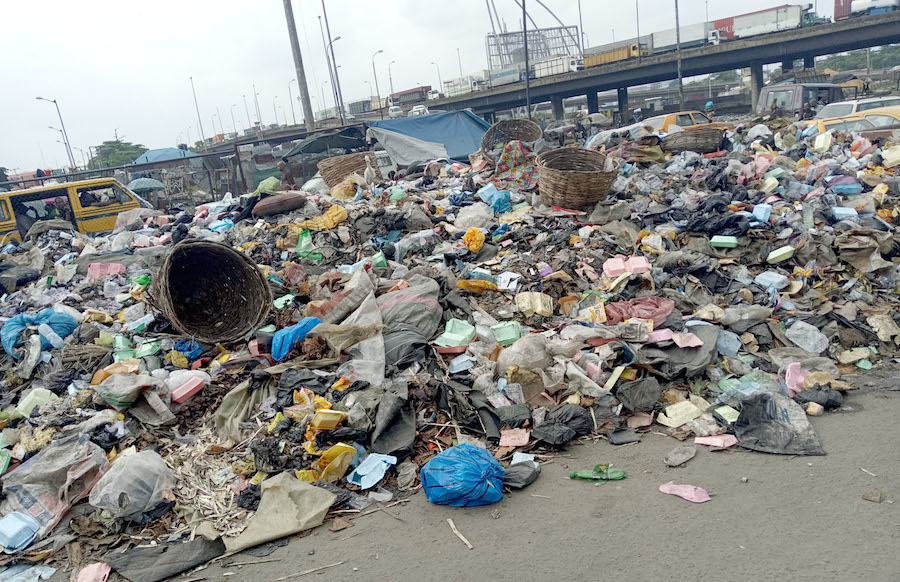 It could be recalled in 2017, Jide Idris, the then Lagos State commissioner for health, disclosed an outbreak of diarrhoea in the state. Of the 27 cases confirmed, a total of two deaths were recorded and the remaining 25 persons placed under surveillance.

While briefing the press at Alausa Secretariat, Ikeja, Idris said the cases of diarrhoea were reported in key areas in the state including: Somolu LGA on July 19, 2017, Oshodi-Isolo LGA on July 20, 2017, and Surulere LGA on July 21, 2017, after the incidence of the heavy rainfall in the state that caused massive flooding in most parts.

Reviewing the statistics of the cases reported, Idris noted that six cases were reported in Somolu LGA with one of the patients reported dead.

“Two cases were recorded in Oshodi-Isolo LGA. One was managed at a private hospital and he is alive, while one died at home. Fourteen cases were reported at Surulere LGA and managed at Randle General Hospital. No death was recorded.

“Majority of the cases presented with the typical diarrhoea and vomiting associated with cholera.”

Looking at the epidemic waiting as a time bomb to explode, we do not need a seer to know the enormity of what we have at hand; this is the time to act fast.

We can mitigate against this if collectively we make up our minds to improve on waste disposal in our immediate environment.

Recently, as part of its community development initiatives and commemoration of this year’s World Environment Day (WED), a private organisation went on environmental sensitisation at Ajiran community in Eti-Osa area of Lagos State with a view to educating them on creating an environment that is safe and liveable.

The community complained that the Lagos State Waste Management Authority (LAWMA) no longer come to their area frequently to collect waste, adding that even when they did, bad roads did not allow them go near individual houses.

They therefore requested that very big waste bins be provided for them where household wastes could be dropped for easy collection by the waste management authority.

This delay or near neglect still makes chart pushing business thrive, even after years of their disbandment. It will not be misleading to say that if this is allowed to continue, an environmental waste cataclysm is about to happen in the Lagos environmental landscape, and the health catastrophe can only be imagined. 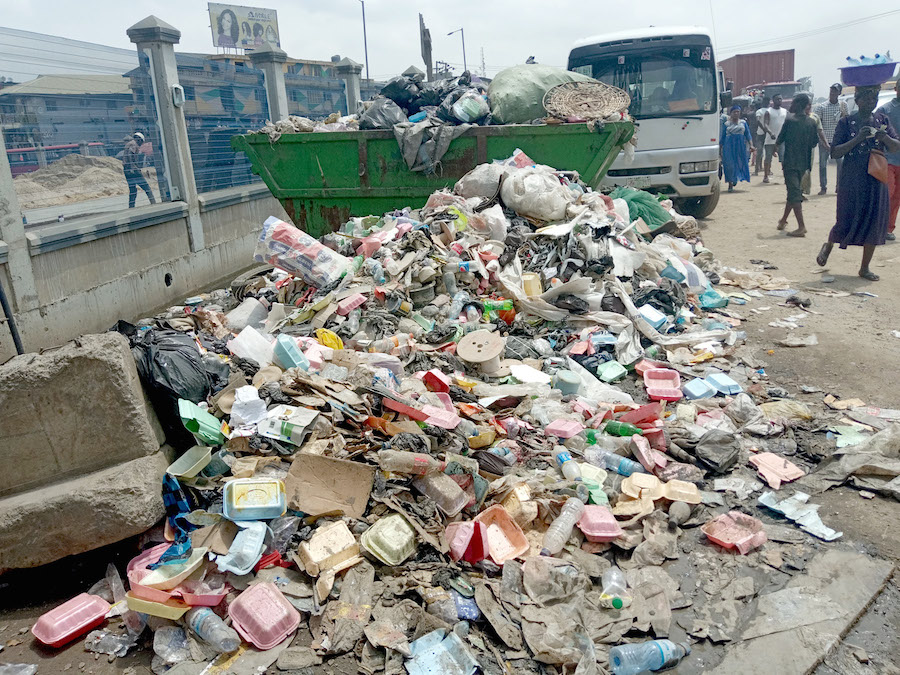 To date, the state has lost count of the amount of solid waste generated on daily basis, but it is certain this has increased drastically.

Sadly, the collapse of the government run dumpsites, the failure of government to fix the rot and pay licensed waste managers what is due them, the piles of garbage on street corners and marketplaces are the consequence of the narrative above.

Wale Adebiyi, managing director, WeCyclers, told BusinessDay recently that Lagos was estimated to generate about 14,000 to 15,000 tons of waste daily. Of that, roughly, 30 percent is recyclable and 50 percent of the recyclables is plastic.

However, far less than10 percent of plastic waste is actually being recycled in Nigeria, the bulk of which ends up constituting nuisance for the environment when it could have been recycled to make money (just imagine how much revenue this can add to the internal revenue generation of the state, if proper waste management is adopted).

Government went wrong
It was a sad time for Lagosians when the then state governor, Akinwunmi Ambode, engaged a new waste manager – Visionscape – without any concrete agreement with the former waste managers – the PSPs, who cried foul and did everything to frustrate the new operator. At this stage, the waste problem was still being partially manageable.

Lagos became urban slum when Visionscape was frustrated from the system of waste management by the combined efforts of the PSPs and the Lagos State House of Assembly. Before now, Visionscape had gone to the Nigerian Stock Exchange to raise a state-backed bond, and had done everything to mobilise men and materials across the state, but the conspirators did not gave a hoot before kicking it out, not minding taxpayers money going down the drain.
Till date, the state is losing money with residents no longer ready to pay for waste evacuation, instead they dump waste at the centre of roads waiting for the PSPs to come, maybe once a week or two weeks, to evacuate. 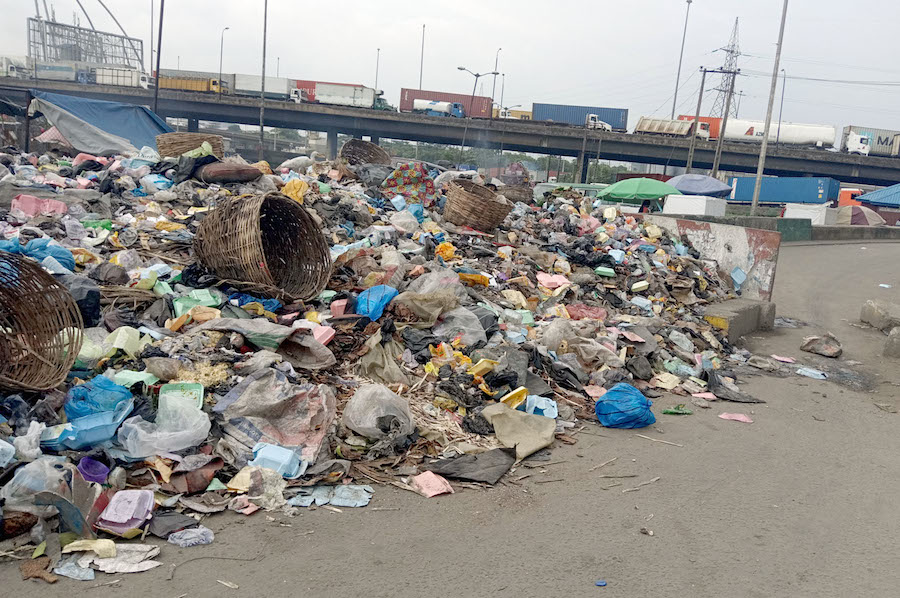 Government speaks
Managing director of LAWMA, Ola Oresanya, told BusinessDay recently that the issue was not about the state or PSP operators losing money as a result of tenements not paying their waste bills.

According to Oresanya, government was more interested in cleaning up Lagos, and has therefore guaranteed to pay the PSP operators, but expect them to get into the nooks and crannies of the state to collect refuse.

Oresanya said though waste collection had a commercial value, there was, however, a social service side to waste management, which the state government, for now cannot totally overlook (in essence, the state wants the residents to get involved).

What to do
Education! Education!! Education!!! should be overemphasise. The state should embark on a mass media campaign on the danger of improper waste management. As Lagos is home to over 15 FM Radio stations and over 10 TV stations, with the combine effort of these mass media outreaches, nobody would be spared of not hearing the jingle, either from the radio or TV (as part of the media corporate social responsibility, we should be ready to do this free).
This will include what the residents stand to gain, and the implications of doing otherwise – outbreak of epidemic.

Now, the state should be humble enough, and for the interest of us all, to call back the operations of Visionscape Waste Managers because of the efforts – both human and materials – the company had deplored. I am not advocating for Visionscape, but no PSP operator in Lagos currently has what it takes to manage the waste threatening all now – both human and material. This is why you see the state in this present state of waste. Let the state bring back Visionscape and marry them with the PSPs in order not to allow the materials and recourses already deplored to go waste.

On a more drastic note (my humble opinion), after the period of combined jingle should come serious sanction for any erring resident (this can vary depending on the offence). A taskforce should be set up to monitor the state, and if improvement is slow, no trading and business activities should be carried out in any street, road, lane, etc, that still wants the wrong waste dispersal status quo until improvement is seen.
Alternatively, firms in the recycling business should be incentivised, and waste-to-power initiative be encouraged, as the state is rich in waste generation, and the population provides a ready market for the power.

Things are the way they are currently because there is a breakdown in the social contract between the government and the people. If this is allowed to continue, the state may find it difficult to convince the residents to pay their taxes and see reasons for a change in attitude.
This is also why the issue of education and campaign is imperative; the residents should be made to own the process of waste management for us to come out of this quagmire.
Until residents and business owners, who are the real culprits of illegal waste disposal, own the process of proper waste management, the state will only achieve little. This is so as no Lagosian is willing to pay for waste disposal any more.

Don’t give up on Nigeria, Jonathan urges citizens

Paris Club refund: Why NGF is kicking against deductions – Spokesman