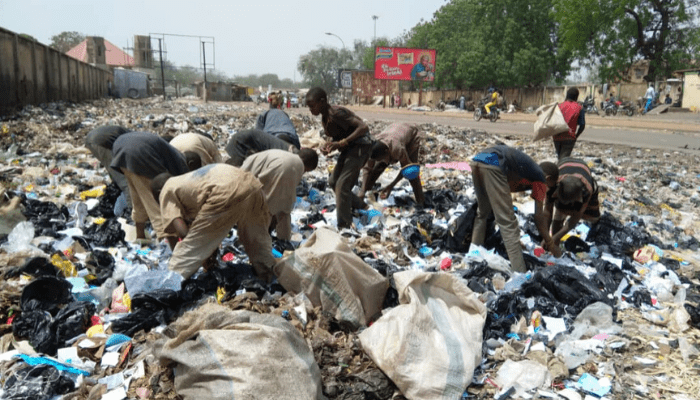 The terrible smell from the dumpsite could block the nostrils; passers-by resist the stench, preventing their nasals from sniffing the odour which has overwhelmed the atmosphere. The early morning sun is sweltering, yet the winter’s wind blows heavily.

Residents and commuters of the area become restless the moment they tread on the path of the Aliyu Jodi dumpsite which is earthily situated in the heart of Sokoto city; they are compelled to get their noses covered, dramatically.

Amidst the terrible filth in the terrain, eight-year-old Abdulrahman Abdullahi – and his scavenging cohorts bend their backs against the flaming sun, squatting and scouting for used plastic products, rotten metals and all sorts of unidentified trashes. “I’m here to scout for used metals,” says Abdullahi as he stands steadily on his feet, winking his blood-coloured eyes and speaking, somewhat shyly. “I sell the used metals to get money to feed myself.”

As Nigeria overtakes India as the country with the largest number of people living in extreme poverty, people from the northern part of the country are reportedly the poorest. According to a report by World Bank, 87% of poor Nigerians are from the north – “in Nigeria, poverty wears a northern cap; if you are looking for a poor man, get somebody wearing a northern cap” – a top political leader from northern Nigerian once remarked.

Controversial issues regarding the cause of such extreme poverty in the region have emerged recently. Many people, especially elites, believe that irresponsibility of parents towards their children, aggressive tolerance of child begging, child labour, child marriage – in the name of culture – and all sorts of abuses towards northern children have contributed immensely to the cancerous poverty strike in the northern parts of the country.

Illiteracy, which results in denying children of school-ages their rights to basic education is also regarded as the basic yardstick for child abuses and gross violation of the Child Rights Acts. According to the United Nations International Children Emergency Fund, “Nigeria accounts for more than one in five out-of-school children anywhere in the world. Although primary education is officially free and compulsory, only 67 per cent of eligible children take up a place in primary school. If a child misses school for even a short time there is only a low chance, only about 25 per cent, that the child will ever return.”

However, despite the public clamour for the need to respect the rights of children, especially in northern Nigeria, heart-rending cases of child abuses continue to trend in northern states of the country. Sokoto is not an exception.

The children of garbage

On the messy valley of wastes and trashes in the downtown of Sokoto state, five rag-clothed children are seeking public mercy; the kids are perpetual patrons of the dumpsite, looking for all sorts of wastes trashed by some individual. For the people, it is a waste, but for the children, it is a means of livelihood – which can be revalued after being devalued by the original users of the waste-products.

“We come here every day to scout for used tins, plastic bottles and metals,” says Abdullahi, who seems to be the leader of the kid scavengers. But Abdullahi is not alone in this business; there are seven-year-old Usman Abubakar and Saliu Abdullahi, who appears to be too little to even know his age.

Sad enough, the three lumpen kids who came from different families in the northwestern states have some things in common – they are poor children of careless parents, fated to meet in Sokoto in search for greener pastures. Odd as it may sound to hear, the kids who were put under the tutelage of some Islamic scholars in the state are forced to forage and find means of livelihood for themselves – and by themselves.

As against the popular narratives about the children’s lumpenhood in the state, many of the kids expressed their displeasure over their condition as child beggars and foragers. Some of the children – while speaking to the reporter – revealed that they would not have any reason to go back home to meet their parents.

‘Our tutors get returns from our daily exploits’

Usman Abubakar wishes he could live to survive in a saner world. But as a kid, he has no control over his ill-fated lifestyle. He spends most of his times every day on the dumpsite looking for used plastic bottles to trade in the city of Sokoto state. A hungry man, it’s said, is an angry man; but for Abubakar, he is hungry but rather not angry – he is simply self-contented with the token he makes from his daily exploits.

Born in Zaria, Kaduna state – raised as a child beggar in Kano – and now he finds himself not just a child forager but also scavenger in the heart of Sokoto state. “I’ve spent four years in Sokoto,” he murmured, slowly. “I never attended any western school; I was brought to this land as a child beggar, under the tutelage and guardian of an Islamic teacher.”

Sadly, Abubakar works hard like a donkey but earns like an ant; for hours, he will trek under the scorching Sokoto sun to explore the refuse site. “I’m here to search for plastic bottles,” he says. “Before, two pairs of plastic bottles are sold for N5 – but now, five pairs are sold for N10.”

As hard as it is for Abubakar and his cohorts to make their daily ends meet, the scavenging children are compelled to give a kickback from the token made in the cause of their hustling. “Our tutors get returns from our daily exploits,” Abubakar opens up. “We pay at least N20 naira to our Islamic teachers daily, after returning from the streets.”

Children put under the guardian and tutelage of Islamic tutors in Sokoto and many other states in the northern parts of the country are usually extorted and exploited, further findings have revealed. Saliu, one of the three scavenging children affirms that they are compelled by their tutors to give a return of their daily earnings, stressing that it’s dutiful to give a return to their teachers.

It’s a glowing Thursday morning in February, everything is huffing and puffing; six-year-old Shafiu Abu appears in his tattered attire, hanging his begging bowl round his neck and swinging the bowl frequently as he approaches doorsteps of inhabitants of Dundaye, a rural community in Sokoto state.

Abu – as he’s fondly called – is a child beggar, who lives in pains and penury as a kid neglected by his parents – and subjected to torture by his guardian-tutor. The similitude of the calamity that befalls Abdullahi and other children of the garbage is exactly the primary woe that betides children of school ages in Sokoto state. As a child beggar, what Abu earns is not always totally his own; he also gives some parts of the offering given to him to his supposed guardian.

But then, while Abu struggles to labour under the scorching sun of the state, his guardian who pushed him out to beg for food and money – and sit back at home to get returns – seems to see nothing wrong in engaging children in child labour.

Mallam Isa Ruhullah an Islamic cleric in the state – and a guardian of many abandoned children – argues that there is nothing really bad for a kid like Abu to struggle for himself, noting that it is parts of what is required to fulfil his learning cause under his tutelage.

“They get food for themselves. All I do is to teach them,” he says of the abandoned children under his tutelage. “Also, nobody or government brings any food here to feed them. All they do is they go to people’s houses (to beg), some hawk sachet water (pure water) or wash at people’s houses to get paid.” He added that “those who are not done with their learning only pay N20.”

Curbing the scourge of child abuses

More than ever before, Nigerians are clamouring for the eradication of the pandemic child abuse in the northern parts of the country – and the advocacy for the adoption of the Child Right Acts becomes more engaging.

The recent movements against child abuse by non-governmental organisations such as Youth Hub Africa has raised the brows of elites over the need to urgently curb child begging, child marriage, child labour and all sorts of abuses meted on children in Nigeria.

Recently, the Kano government, under the leadership of Governor Abdullahi Ganduje, banned street begging by vulnerable itinerant children of the state, following the controversial comment of the former emir of Kano, Sanusi Lamido Sanusi about educating northern children. Sanusi had advocated that careless parents of child beggars should be arrested; this brought about lots of social media actions and reactions by concerned Nigerians.

However, while northern states such as Kano, Nasarawa, Niger and Kaduna have taken bold moves to respect the doctrines of the Sokoto still harbours child scavengers and beggars who are neglected by their parents and usually extorted by their guardians.

Meanwhile, erstwhile DirectorGeneral of Media and Publicity to the Sokoto government, Mallam Abu Shekara noted that the passage of the Child Rights Act is indeed critical to the resolution of the almajiri menace. And Sokoto is among the states that have made significant progress towards its ratification.

“But again, religious and cultural variables are being addressed, through consultation with and involvement of traditional and religious authorities before the final adoption of the law,” he said.

Reporting for this story is supported by Youth Hub Africa and Malala Fund.

‘ I never attended any western school; I was brought to this land as a child beggar, under the tutelage and guardian of an Islamic teacher

Abule Ado: A day of death, fury and losses