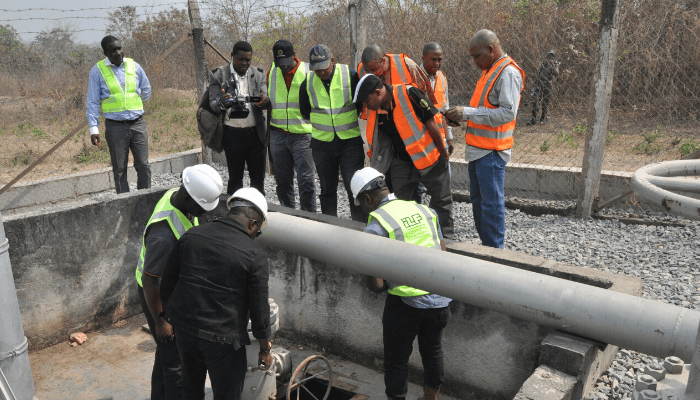 The flagging off of the country’s most ambitious gas project today by President Muhammadu Buhari will have a tremendous economic impact on the citizenry. In this write- up, Olusola Bello tries to examine the benefits that come with such a project.

History is being made today, Tuesday 30th June 2020, in the annals of gas utilisation in Nigeria as the Presidential Flag-off of the Construction Phase of the Ajaokuta-Kaduna-Kano (AKK) Gas Pipeline Project takes place in Ajaokuta, Kogi State and Rigachikun, Kaduna State.

The project which is expected to boost domestic gas consumption, power generation, and industrialisation will be performed by President Muhammadu Buhari through virtual flag-off.

Today’s exercise has brought to reality the long term dream of the Nigerian government of building the nation’s biggest domestic gas transmission infrastructure.

Read also: Obasanjo recommends post-pandemic measures to get Nigerians, economy back to normal

The president, by the flag off of this project at Ajaokuta, Kogi State, would be turning to reality some of the nation’s long term economic aspirations of boosting domestic energy infrastructure, deepening the local gas market, creating industrial corridors with cleaner fuel, and commercialising the country’s abundant gas resources.

According to the Nigerian National Petroleum Corporation (NNPC), the project will significantly curb gas flaring in the Niger Delta and guarantee better air quality in the oil producing region.

Furthermore, the pipeline which was conceived to connect demand from the northern part of the country with supply from the south would be the biggest infrastructure development in the country’s recent history. It will also mark a significant shift in the nation’s energy policy; from revenue targeted export programmes to development focused domestic supply programmes.

Significantly, the $2.8 billion project is coming up after seven years of rigorous processes that morphed from policy conception through implementation strategy designs, master-plans and solid implementation programmes.

Despite the generally well-known fact that Nigeria is an oil producing country, Petroleum Industry experts often describe the country as a gas province with little oil. As at last count, Nigeria is said to boast of 203trillion cubic feet (tcf) of proven gas reserves, ranking 9th in the natural resource in the world. Indeed, United States Geological Survey estimates that Nigeria’s gas reserves potentials could be as high as 600trillion cubit feet. Experts are of the opinion that not until very recently, there had not been a deliberate search for gas in Nigeria.

In spite of the huge natural gas resources of the country, however, the nation’s domestic gas utilisation is low, with data revealing that, of the Liquefied Natural Gas and Gas to Liquid (GTL) produced in Nigeria, only 47 percent is consumed in-country, 44 percent exported, with 9 percent flared. The low per capita domestic gas consumption is attributed largely to infrastructural deficiencies.

The Administration of President Muhammadu Buhari since assumption of office has reinforced investments in gas infrastructure which, sooner than expected, would boost domestic utilisation of natural gas. One of such is the proposed Ajaokuta-Abuja–Kaduna–Kano Gas Pipeline which is a section of the Trans-Nigeria Gas Pipeline (“TNGP”) with a capacity to transport about 2.2billion cubic feet of gas per day.

The Pipeline will originate from Ajaokuta, in Kogi State and would traverse Abuja (FCT), Niger, Kaduna and terminates at Kano. It is expected to be fed from the existing domestic Infrastructure with a capacity of over 1.5 Bcf/d and is being expanded by Escravos-Lagos Pipeline System II (ELPS II) and Obiafu-Obrikom 3 (OB3) gas pipeline (under construction) that will double the capacity to over 3billion cubic gas per day

The right of way for the proposed AKK gas pipeline is planned to run parallel to the existing Nigerian Pipelines and Storage Company’s 16 inch-crude oil and 12 inch- product pipelines wherever possible.

The Engineering Procurement and Construction Contract (EPC) of the project which was awarded by the Federal Executive Council in 2017 has a completion period of 24months and defect liability period of 12months.

The AKK Project, when completed, offers enormous economic and social benefits to the nation. It would unlock 2.2billion cubic feet of gas to the domestic market, support the addition of 3,600mega watts of power to the national grid and revitalise textile industries which alone boast of over three million jobs in parts of the country.

In addition, the AKK project will support the development of Petrochemicals, fertilizer, methanol and other gas-based industries that will generate employment and facilitate Balanced Economic Growth.

The AKK gas project is a component of the Nigerian Gas Master Plan (NGMC), a gas infrastructure blueprint, which was approved by the Federal Executive Council in 2008, but which has received serious attention of the Buhari Administration. The other major domestic gas transmission systems are: The Western System, that is, the existing 36” Escravos-Lagos Pipeline I and II with 2.2billion cubic feet capacity and the On-going East-West connection via the Obiafu/Obrikom-Oben Pipeline (OB3) featuring 2.4billion cubic feet per day capacity.

Arriving at today’s presidential flag-off of the construction phase of Ajaokuta-Kaduna-Kano pipeline did not happen overnight. Lots of players, at government, technocratic and at other leadership levels had worked committedly, culminating into the event of today. The glory and euphoria of the day belong to all who have contributed, in one way or another, to the gas development efforts of the Country.

The Project will also facilitate the development of three (3) base Independent Power Plants (IPPs) in Abuja (1350MW), Kaduna (900MW) and Kano (1350MW) and steer the development of gas based industries along its corridor and beyond.

Other values envisaged from the project include: multiplier effect in the local content circles, Cleaner environment for the host communities, accelerated technical growth, direct citizen utility, Industrial convenience, and of course, general broadening of the economy.

Federal Executive Council awarded the Engineering Procurement and Construction Contract (EPC) in favour of the following companies on build-and-transfer-basis (BT) with a completion period of 24months and defect liability period of 12months.

The Scope of Work includes Engineering, Procurement, Construction, Installation, Testing and Commissioning of a 40” x 614km class 600# pipeline system from Ajaokuta to Kano with associated intermediate and terminal facilities to supply natural gas to off-takers at Abuja, Kaduna, Kano and Zaria environs and along the environs of the pipeline route.

The scope of work for the EPC for the AKK Gas pipeline segment is as delineated here: Segment 1; Engineering, Procurement, and Construction of 40” X303.4 Km linear pipeline system from Ajaokuta to Kaduna; (Kp 0 to Kp 303.4), Ajaokuta MS/TGS, Abuja IPS and all sectionalising BVS, inclusive of BVS 12 @ Kp 303.4, with a 20” x 15km spur line

The 614 kilometer gas pipeline conceived to provide the highly desired stimulus to domestic industrial growth will be delivered by a consortium of indigenous and international engineering firms. This project will also signal the finest hour so far for the Nigerian Content Policy goals.

Oilserv Limited and CFHEC consortium will handle phase1 of the construction while Brentex Petroleum Services and China Pipeline Bureau (Brentex-CPP) will handle the second segment.

The Buhari Administration will ever be remembered for taking the practical step to ensuring energy security for the country by consolidating Nigeria’s aspiration to have a national energy mix that works for the country and the entire citizenry.