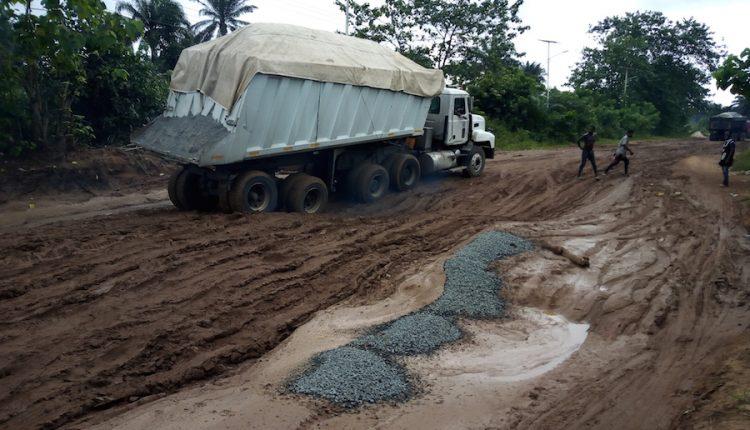 The 50 kilometre road that connects Abia, Akwa-Ibom and some parts of Rivers State was awarded for reconstruction in 2010, by the Ministry of Niger Delta Affairs. However, the contract has been abandoned, turning the road into a death trap. GODFREY OFURUM reports.

The approval for the reconstruction of Obehie-Akwete-Azumini-Ukanafun highway, a federal road linking agrarian and oil producing areas of Abia, Akwa Ibom and some parts of River State, which was initially seen as a blessing by the people, has turned to be a nightmare.

The contract for the dualisation of the 50-kilometre road, was awarded to Chinese Civil Engineering Construction Company, (CCECC) Nigeria Limited in 2010 at the tune of N34 billion.

The road has two sections that were awarded separately to the same company.  The first section starts from Obehie Junction, off Aba-Port Harcourt highway to Akwete and covers 20 kilometres, while the section, covering Azumini to Ukanafun in Akwa-Ibom State is 30 kilometres.

The first section from Obehie Junction to Akwete, which has been abandoned, is filled with life threatening and vehicle damaging potholes, down to Ohambele community in Ukwa East LGA.

Entrance to Ukwa West LGA Secretariat at Okeikpe has become an eyesore, as well as a dead trap to motorists and commuters. Small vehicles get trapped on that section of the road, while long vehicles overturn daily there, due to its bad condition.

The road leads to the main agricultural hub of both Abia and Akwa-Ibom States, as all the communities covered by the road, are agrarian communities.

Uzoma Abonta, member, representing Ukwa East/ Ukwa West Federal Constituency in the House of Representatives, described the road as a regional road that should be taken over and completed by the Niger Delta Development Commission (NDDC).

According to him, that road was awarded many years ago, by the Federal Executive Council. It is not a state road. It was actually initiated, by me and the contract was awarded to a Chinese firm. 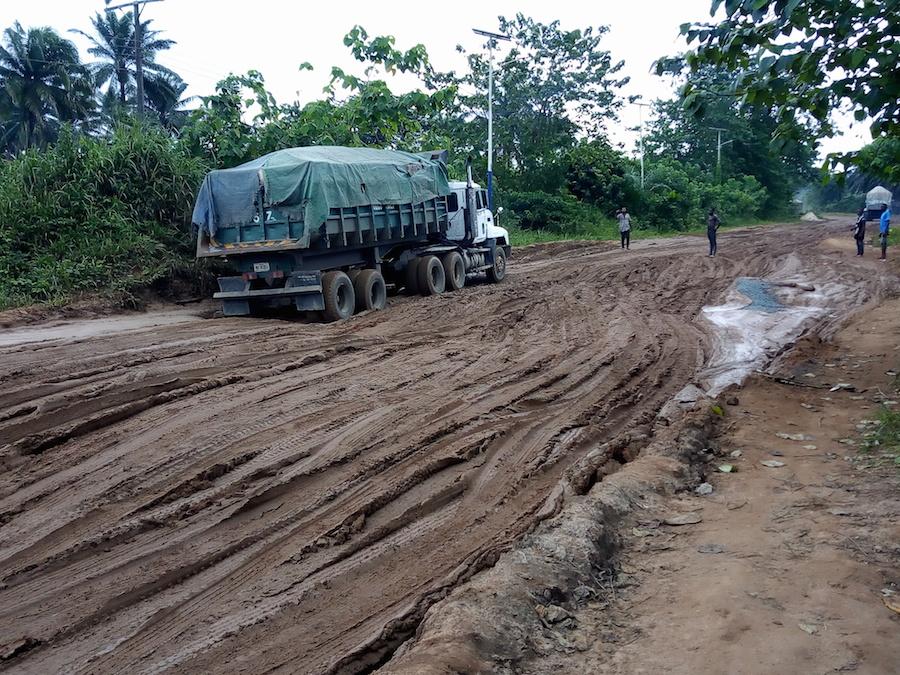 “And they were waiting payment of compensations and all that on the road. I’ve written to the Ministry of Niger Delta to please pay the Chinese company, who claimed they are been owed to continue work and possibly complete it fast to reduce the suffering of the people.

“The federal constituency is an oil producing area. Till now, the people have been subjected to unbearable hardship, because of the nature of that road.

“We are cut off during raining seasons. I’ve made several appeals to the Ministry of Niger Delta. We’ve also called on the NDDC, who continues to provide palliatives on that road.

“Our argument is that NDDC, should take it fully and pay the Chinese company, to do the needful, because what we’re getting now from the palliatives cannot put the road in order.

“From Azumini to Opobo Junction is bad, while Obehie axis, is a death trap, thereby cutting off people of Ukwa from the rest of the country, despite our contribution to the economic development of Nigeria.

“We have written to NDDC, to please take over funding of the road, since their parent body, the Ministry of Niger Delta is also involved. They should assume that road, as a regional project”.

He continued, “The road moves from Abia to Akwa-Ibom and Rivers States. It is qualified as a regional project, therefore NDDC should take it over.

“I have written; Enyi Abaribe, senator, representing Abia South senatorial zone in the Senate, has also written to the Ministry, but they kept on saying they will put it in their budget and when the budget comes, they will vote little sum for the project.

“The last time, they approved N200 million for it. What will that amount do on that road? We argued and said, make it N1billion, so that the company can come back, but it fell on deaf ears. But we will not relent. We will keep doing the right thing.

“The road has economic value. It leads to Akwa-Ibom and people coming from Rivers State and Abia use the same road. If people must move agricultural produce, that road must be in good condition”.

For Obum Mao Azunna, chairman, Grand Council of Niger Delta Youth Leaders, Abia chapter, CCECC only did about 500 meters quasi construction at Okeikpe area in Ukwa West, since 2012 till date, stressing that the road has subjected the Ukwa people, their Annang and Ogoni neighbours to economic hardship.

“Properties worth millions of naira were destroyed, by the company in the course of executing the project, but less than 7percent of the people affected were paid compensation.

“The road is important, due to its usage by the Ogonis and Ndokis of Rivers State, The Ukwa-East and Ukwa-West indigenes of Abia and the Akwa-Ibomites, who use the road on daily basis.

“Ukwa land is the only oil producing territory in Abia State and I wonder why the Federal Government would abandon an important project that would enhance the wellbeing of Ukwa people, Abians and Nigerians in general. Ukwa people do not find it easy with the road, especially at this rainy season.

“The road was awarded to CCECC, by the federal government, during the administration of President Goodluck Ebele Jonathan, sometime in 2010. The road network traverses Obehie town in Ukwa-West Local Government, through Akwete and Azumini in Ukwa-East Local Government and ended at Ukanufun town, in Akwa Ibom State, Nigeria. “Obehie to Akwete was captured in the first phase of the project, according to available public document (sign-board) at Obehie. However, the company commenced the project at Ukanafun in Akwa Ibom, which was supposed to be on the second phase of the project and stopped somewhere after Azumini”.

The condition of the road is a reason for every Ukwa person to weep, Onyema Olujie, former chairman, Akwete Joint Council of Chiefs said.

He argued that his Akwete community has totally been cut off, by the deplorable condition of the road, noting that his people now find it difficult to access either Aba or Port Harcourt for their daily businesses.

“Our communities are agrarian, our constituency is oil producing, we have every natural gift that can make us rich. In fact, we’re rich by nature, but we have no roads at all.

“Majority of our people can’t even access Aba or Port Harcourt again to go and buy something needed for household or farm. They can’t even go to sell. Our people are suffering terribly.

“The road in question is supposed to be part of the Niger Delta road network. Unfortunately all the Ministers of Niger Delta have not been able to complete that road since Jonathan’s regime. We’ve been having a lot of hardship.

“For those of us from Akwete, we are saying they’ve inadvertently created a republic for us, because we can’t access Obehie and we can’t also access Aba, through Opobo/Azumini road.

“I don’t know if they’ve abandoned the road. At a point we learnt that the Federal Government was owing them lots of money. When little was paid to them, they did not do the road from Ukanafun to join Azumini.

“After then, nobody knows whether they’ve abandoned it. We were all happy at the initial stage when they awarded that road, but currently I don’t think there’s anything to be happy about.

“Again to think that the worst two spot on that road are in front of Ukwa West Local Government Headquarters in Okeikpe and then the terrible one at Ohambele is worrisome, because the Local Government at Okeikpe ought to at least do some palliatives there.

“So you’ll wonder what the state government is doing there. Yes, it’s a Federal road, but those using it are mostly Abia and Ukwa people. It’s very sad. We’ve been suffering”.

John Uko, a 70year old retired school teacher and native of Ukanafun, a commuter in a stranded public vehicle at Ohambele axis of Obehie-Akwete-Azumini-Ukanafun road, observed that abandonment of the road is anti-trade and commerce.

“I don’t know why we love doing wrong things in this country and ignore the right things. Even a child knows that a motorable Obehie-Akwete-Azumini-Ukanafun road will change people’s lives and create a new busy commercial centre in the middle of Rivers, Akwa-Ibom and Abia State.

“There’s something significant about this road. People always talk about economic diversification, especially on agriculture. If there’s any road in Nigeria that can improve agriculture in terms of moving farm produce into cities and also improve trade and commerce between rural, suburbs and urban areas it’s this road”, Uko stated.

He explained that the road is also capable of strengthening the unity of Nigeria, as it connects five ancient tribes that have been doing businesses together, pre-colonial era.

“From where we are, you already know it came into Ukwa land, who are Igbos. From the other side, the road leads to Ogoni land in Rivers State.

“So, to me, it is an economic and unity road. I am from Ukanafun and often go to Ikot Abasi for business. I must pass through Ukanafun and Oruk Anam, before accessing Ikot-Abasi. I’m already in Ukwa, which is an Igboland. Can’t you see the link?

“What else can boost unity more than trade and commerce? When people do business together, they know each other culturally and otherwise. The old ports that connect each other around this area aren’t working again. Now, the road, especially this Abia section is a shame.

“From here to Opobo and other nearby local ports, were all active in the past and the people in government know the resources here.

“For me I don’t know why they enjoy watching people suffer. This road can create a new commercial city for Akwa-Ibom, Abia and Rivers States, if things are done properly in this country.

“I plead with whoever that is in charge, whether Abia or Federal Government or even the NDDC, to quickly fix this road, because it will help our people to survive on their own, through trade and commerce. That’s all I ask for”.

“I don’t know why they abandoned the other side. I enjoy taking passengers from Azumini Junction to Ukanafun and even down to Etim Ekpo. But it is always a problem to move from Azumini towards Obehie during raining season.

“Even most taxi drivers are afraid of going towards that route, because it causes a lot of problem. I am just begging them to help fix that road, because it will help the people.

“Most Akwa-Ibom Transport Company (AKTC) vehicles that ply this road are no more coming, as usual. I don’t know whether they have found a new route, but we all know this road is closer for them.

“The Opobo-Azumini-Aba road is also not good. Let them just help us and fix it. I’m a hardworking man. I don’t beg anybody for food.

“My biggest enemy is bad road. If the roads are good, I have enough traders and passengers to carry on daily basis and make genuine money,” he stated.

Gentjan Cekeli breaks down the 4 D’s of success