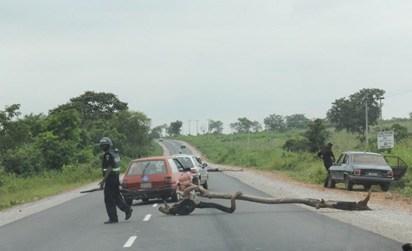 As we set out on our journey exactly at 6:45am that fateful Friday morning, July 17, 2020 from our bus terminal at Ejigbo, a suburb located in the Isolo area of Lagos State, Nigeria’s commercial hub centre in the Western region, I was so convinced that by leaving Lagos few minutes to 7am in the morning, I would be able to get to my destination in Imo State, not later than 4pm.

In making these plans, I never envisaged that travelling to the eastern part of Nigeria from Lagos has become very excruciating as uniform military and paramilitary officers have laid siege to the roads in the guise of mounting security check points.

When we departed from our bus terminal, it was a smooth ride all through Oshodi to Gbagada as we were able to get to the Oworoshoki axis of the city in a matter of minutes and were trying to connect to Lagos-Ibadan Expressway, the only motorable exit out of Lagos, and that was where our problem started.

Three hours into our journey, we only managed to reach the Toll-Gate/Motorway axis of Lagos-Ibadan Expressway at exactly 10am that morning. This was due to the heavy traffic gridlock on that axis of the Lagos-Ibadan Expressway, which has become a daily occurrence such that travelers and commuters now spend longer man-hour on the road caused by the perpetual construction works on the road.

Sadly, Lagos has other alternative exit routes to Ijebu-Ode in Ogun through Ikorodu and Epe, but motorists avoid them especially the Ikorodu axis, which is presently in poor condition as a result of government negligence.

Back to our trajectory, having spent 3 hours without making any headway out of Lagos, our driver had to maneuver through Ojota and diverted to the ‘dreaded’ Ikorodu-Ijebu Ode Road from where we were able to find our way out of Lagos at about 12:35pm because the road was garnish with potholes and gully.

On hitting the Ijebu-Ode/Ore-Benin Expressway, I discovered that the checkpoints mounted by military and police officers were unbearable such that at every three to five minutes drive, approximately 200 meters, the vehicle will slow down to traffic logjam caused by either military or police checkpoint. From Ijebu-Ode to Onitsha Bridge Head, we encountered over 80 check points.

With this situation, it is no longer fun to travel to the Eastern part of Nigeria by road. At exactly 9:19 pm, we arrived in Owerri, Imo State where we finally had to stay the night to continue the journey to my country-home the next morning due to the 10pm to 4am dust to dawn curfew. In actual sense, I did not get to my final destination till the next day.

It has now become a traumatic experience travelling to the Eastern part of Nigeria because on getting to my destination the next morning, it took me another two days to recover from body pains, head ache and other health challenges that I faced for spending two days on the road for a journey of originally 8 or 9 hours under normal circumstances.

The Eastern part of Nigeria, known as South East geo-political zone, is one of the six major zones so named for political exigency. The zone is made up of five states, namely- Abia, Imo, Anambra, Enugu and Ebonyi. Historically, the zone has suffered government neglect, which can be seen in the poor state of infrastructure, which has now worsened after the civil war.

Since the civil war, it appears there is an unwritten law that the zone would no longer be reckoned with in the scheme of things in the country. This is not lost on most people from the zone. Successive administrations and governments have pursued the alleged exclusionist agenda. For this reason, the zone has the worst road networks in the country and lacks Federal Government presence in terms of infrastructural development.

The region is predominantly Christians and thrives on commerce. Since the return of Nigeria to civil rule in 1999, it has remained a People’s Democratic Party (PDP) major enclave, although it lost a state, Imo, to the ruling All Progressives Congress (APC).

Today, owing to a combination of neglect of federal roads to the zone, either from the North or South West geo-political zone, and the over-militarisation of the area, a journey to the East has become a nightmare.

Take your mind back to 2019, when travelling to the South East geo-political zone of Nigeria from Lagos, Abuja or any other part of the country, was a high risk venture. Kidnappers laid siege to travelers. While a number of people suffered terribly in the hands of the kidnappers and bandits, some were even killed even after heavy ransom had been paid by victims’ families.

Cries for security beef up on such routes were every day refrain. Today, there seems to be what could be described as an overkill of such security beef up, which has sadly created a fresh hurdle for travelers to Nigeria’s south eastern states.

Although their presence gives a sense of security that every 200 meter you meet a checkpoint, it also creates a lot of apprehension and bottlenecks in business and impacts negatively on travelers’ health.

Apart from health implication of the multiple check points on the Lagos-Benin-Onitsha Road, businesses situated in the South-East and South-South parts of the country are seriously passing through hell to move goods from Lagos to these regions.

Presently, traders and other travelers that usually come to Lagos to buy goods including importers, who rely on Lagos seaports to move goods are now cut in the middle of the situation.

“The situation has gone really bad as we now find it difficult to come to Lagos to buy goods as we normally do. Formerly, I used to take night bus into Lagos, buy goods and leave the following night to Onitsha to reopen my shop. Now, this routine is very difficult because we cannot embark on night trip anymore due to the curfew and bad roads,” said Cletus Eze, an Onitsha based trader.

According to him, it takes an average of three to four days or even more to complete one business trip to Lagos and back to Onitsha.

While stating that the long trip to and fro Lagos Onitsha is eating deep into his business, he said that going to buy goods takes nothing less than five days now, which is not healthy for businesses in the Eastern Nigeria that depends on Lagos for sourcing of their goods.

“After the very bad experience I had on the Lagos-Benin-Onitsha Road the last time I travelled to Lagos on business trip. I decided to send money to Lagos to enable my customers buy the goods and waybill them to me but that turned out to be the worst as it took almost a week for the goods to arrive Onitsha in Anambra State,” Eze stated.

Most commercial buses and other vehicles going to Eastern states such as Imo, Abia, Enugu, Ebonyi States including some states in South-South region like Akwa Ibom now take two days to get to their destination, said Jude Ikem, a commercial bus driver.

According to him, many of his co-drivers now stay the night in Asaba, Delta State whenever they are travelling to those far away states and they continue their journey the next morning.

On how the multiple checkpoints impact on the Eastern economy generally, Tony Anakebe, managing director of Gold-Link Investment Ltd, a Lagos-based clearing and forwarding firm, who have been doing business with firms in that region, said that these multiple checkpoints that came up on the Lagos-Benin-Onitsha Road in the last couple of months have helped in increasing the cost of doing business for shippers.

Importers and exporters, according to Anakebe, have been recording serious losses due to high cost of moving their cargoes from either the hinterland to ports in Lagos or port to the markets in the Eastern region.

“The existence of multiple security checkpoints manned by officers of the Nigeria Customs Service (NCS), Nigerian Police Force (NPF), and Nigerian Army along the Lagos-Ore-Benin-Onitsha Road are taking toll on businesses. This has made the cost of haulage to skyrocket in recent time as truckers now charges between 800,000 to 1 million to move one container from Lagos to East due to the delays on the road,” he said.

Continuing, he stated that the longer it takes to move laden container from ports in Lagos to warehouse in the East, means that the cargo owners would pay heavily as demurrage to shipping companies for not returning the empty container in due time.

“Corruption will continue to thrive in the country if these checkpoints are being allowed. In most cases, the essence of putting security operatives on the road is becoming almost defeated as these officers use the opportunity to feather their own nest. It has become very absurd that truckers would be compelled to ‘grease the palms’ of these security operatives on the highway before they could be allow to pass the checkpoints mounted at every 200 meters on the road,” Anakebe noted.

BDSUNDAY can recall that Justin Bayili, executive secretary, Borderless Alliance while presenting a paper on the role multiple checkpoints plays on length of time it takes to do business across the border posts within the West African region, said that countless checkpoints are responsible for high cost of trade in West African region.

Bayili pointed out that the existence of multiple Customs and Police check points along the routes from the ports to the border posts, physical state of the roads as well as unlawful extortion are issues contributing to delays and cost for businesses.

“Nigeria needs to reduce the outrageous number of checkpoints to facilitate regional trade. Time is money in transport and businesses, and delays encountered at the border stations and on the roads translate to money that includes payment of demurrage and storage charges at the ports,” he said.