Without any doubt, a visitor can easily see that the industrial landscape of Akwa Ibom State has changed rapidly, a direct credit to Governor Udom Emmanuel’s vision in the last six years. Akwa Ibom, a literally non-existent industrial sector in 2015 when he assumed office, has become a strong and vibrant industrial base that is expanding daily, attesting to his determination to re-write the history of a state where, for the nearly three decades of existence at that time, the only industry was the agriculture, and perhaps, the civil service.

This goes to show that when a leadership is entrusted in the right person the result is often clearly seen, even by the blind. In a feeling borne out of a recollection of where the state is coming from, majority of those spoken with believe the state could not have wished for a better leadership, from every perspective – industrialization, health, agriculture, etc.

According to the Nigerian Investment Promotion Council (NIPC), Akwa Ibom produces the highest oil and gas in Nigeria, while it has competitive advantages in solid minerals like Kaolin, Limestone, Granite, Salt Glass Sand and Coal.

The state, well known for its arable land, investment opportunities and abundant natural resources, has put efforts to improve its infrastructure projects with an airport, two major seaports functioning at the Atlantic Ocean, with plans to build a seaport named Ibaka Seaport at Oron.

Already, the state also has its own airport operated by Ibom Airport Development Company Limited (IADCL)

In addition to this is the Ibom Industrial City (IIC) project, the state government’s long-term economic development strategy that fosters innovation and attracts global investment, and is projected to create 300,000 new jobs by its third phase.

Some features of the IIC project include a deep-sea port, wide life corridors, recreational facilities, new transport links and many others.

In an earlier write up, Ime Okon, a Lagos-based Akwa Ibom industrial engineer, says the transformation of the state has not come to him as a surprise, if it is recalled that Governor Emmanuel’s five-point agenda at the time he assumed office had industrialisation as the pivot of his administration’s economic transformation programme, also making industrialisation the cornerstone of the eight-point Completion Agenda of his second term.

According to Okon, “It shows that from his first day in office, the governor knew exactly where he wanted to take the state. In fact, it can be said that Governor Emmanuel came to industrialize Akwa Ibom. And if that is all he would have succeeded in doing by the time he leaves office, then he would be remembered for that.”

A major milestone in the governor’s focus on developing the three major gateways into the state – air, land and sea – is giving an imperative boost to the governor’s industrialisation efforts. He set up Ibom Air, the first state government-owned airline in the country, in order to open up the skies for potential investors from within and outside the country to be able to access the state at any time. The airline’s operations have importantly increased the number flights going in out of the state daily, with impact on the state’s economy through visitors in search of opportunities as well as leisure.

Furthermore, the administration has stepped up efforts to build road infrastructure leading into and within the state, to make all parts of the state easily accessible to visitors coming in from other parts of the country by land. When completed, the ambitious Ibom Deep Sea Port is expected to be the game changer. A project for which the federal government is partnering the state, the deep sea port would serve as a major gateway through the Gulf of Guinea and enhance maritime trade in the entire region, with a significant boost to the economy of Akwa Ibom.

The icing on the cake

In the centre of Uyo, the state capital, a 21-storey smart office complex that is expected to provide office space for investors is already completed, a first-of-its-kind structure in the whole of South-South and South-East geopolitical zones of Nigeria. The building is expected to house all International Oil Companies operating in the region, if possible, making it their headquarters. This goes a long way in underscoring the administration’s commitment to achieving its industrialisation targets.

Like other one-of-their-kinds industrial projects of the Governor Emmanuel’s administration is the Metering Solutions Manufacturing Services Limited, one of the largest in Africa, in Awa, Onna Local Government Area, with installed capacity to produce 1.2 million electricity meters yearly working one shift. With two shifts, it can produce 3.6 million meters annually, and also capable to a large extent in meeting, to a large proportion, the metering needs of Nigerians. The company barely manages to cope with increasing demand for its product because of its high quality, which it supplies to the Port Harcourt, Eko and Kano electricity distribution companies, and also exports to Liberia and The Gambia

Adebisi Adeniyi, CEO of the metering company, – a wholly-owned indigenous company based in Awa, Onna Local Government Area of the State, – is full of praises for the state governor for creating the required enabling environment for investments to thrive, which investors find attractive. 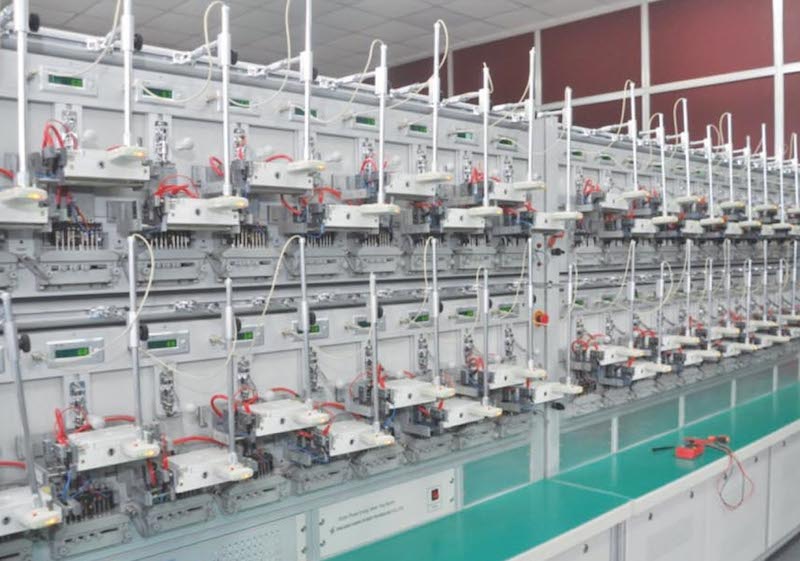 “What the governor in his magnanimity has done is to invite investors, give us the enabling environment in terms of providing the land, access road and by doing so, take off the youths from the streets and reduce crime,’’ Adeniyi said.

At the BusinessDay’s visit to the facility, Tolulope Ogunkolade, general manager of the organisation, said the company was capable of meeting the needs of electricity consumers in the country, thanks to its installed yearly capacity of 1.2 million prepaid meters, while also aiming to lift capacity to 3.6 million.

Ogunkolade described his company as the biggest in the entire African continent, in terms of metering solutions.

“We have engaged a new technical partner who is one of the world’s biggest meter manufacturers. In the next couple of months we should be receiving delivery of the next production equipment, which will lift our capacity from 1.2 million to 3.6 million meters.

“Our facility is clearly and arguably the biggest in Africa in terms of metering solution,” Ogunkolade said. Concerning support to the Federal Government mass metering programme, he noted that the company had been able to meet 95 percent of its metering commitment by releasing over 50,000 meters for national mass metering programme since November 2020 till date.

According to Ogunkolade, the company is also exploring other countries in the Africa market as it aimed to be the biggest metering company in sub-Saharan Africa.

“Beyond Nigeria, we have been able to supply over 10,000 meters to Liberia, we are also exploring the market in Zambia and Niger Republic,” he said.

In terms of challenges facing Nigeria’s power sector, he noted policy inconsistency as the biggest challenge, although admitting the present government had shown a lot of transparency and sincerity of purpose since the beginning of this administration to the sector.

He listed funding, most especially access to FOREX and lack of clarity from government regulatory agencies, as other major challenges facing Nigeria’s power sector.

“Most investors don’t want to take loans from the banks to fund metering projects due to the discouraging interest rates, which is why the CBN put a fund in place where commercial bank can access this funds and do single digits interest rates to meter manufacturers. All of which will still depends on access to forex,” he said.

Regarding clarity from government regulatory agencies, he explained, “As a meter manufacturer, due to some high capital intensive investment there should be some level of concession or waivers I should get. But all those things were not clearly spelt out.”

He explained that Governor Udom Emmanuel created an enabling environment for investors, adding that by so doing, jobs were being created for the youths to keep them away from restiveness and criminal tendencies.

He said the governor invited the investors, and provided them with an enabling environment in terms of the land, security, access road and others.

“This Industrial Park is part of the industrial belt of this state created by the government. So, all the major industries are sited around this area and they are bound to have over 23 to 24 hours power supply,” he said.

For his company, Metering Solutions Manufacturing Services, the governor provided them with a 33KVA substation, which supplies dedicated 24/7 power supply from Ibom Power Company, thereby reducing their diesel cost.

Meanwhile, the governor’s decision to set up a committee on Foreign Direct Investment shortly after assuming office underscored the importance he attached to investments from outside the shores of Nigeria and the contributions they could make towards realisation of his objective of making the state an industrial hub.

The creation of a welcoming environment through building of infrastructure and provision of incentives made investors to begin to look in the direction of Akwa Ibom barely two years into the life of the administration.

This interest manifested practically in the fact that at the 30th anniversary of the creation of the state in September, 2017, several industries, including a syringe manufacturing company, also at Awa, had become operational. 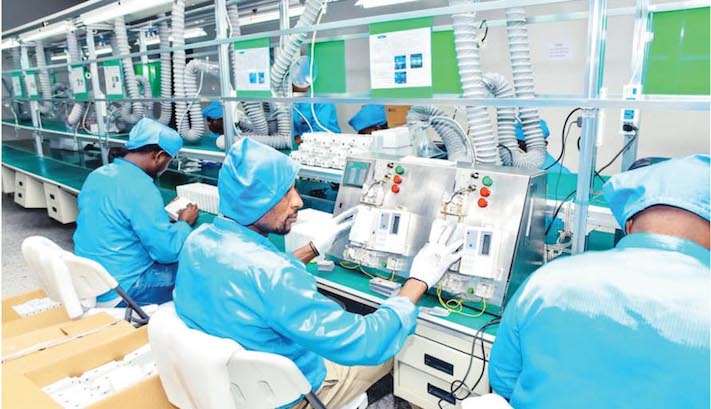 It is proof of the faith investors have in the changing status of Akwa Ibom that within five years – a period many states have not had up to five functional industries – over 15 industrial establishments are already running in full steam to stimulate economic activities and bring about improvement in the socio-economic lives of the people. This has come through creation of thousands of jobs and manufacture of essential goods that are required for everyday living, as well as payment of taxes.

It is worthy of note that the attraction the state holds to investors, their abiding faith in the governor’s competence and integrity, as well as the consistency of his administration’s policies, is evident in the fact that some of the industries that are operating in the state today are products of the public-private partnership policy that is driving the administration’s industrial revolution.

The changing industrial fortunes of Akwa Ibom is positively impacting on the standard of living of the people, stimulating the right level of economic activities expected to create jobs, creating wealth and alleviating poverty, eventually taking idle youths off the streets and keeping them positively engaged to be able to improve their lives and contribute to the socio-economic development of the state.

Millions of dollars down the drain, oil in the north remains elusive

5 funding opportunities for SMEs in Nigeria

Inflation in the country and strategies to contain it

Why we made landed properties affordable – T.Pumpy MD