You need to active Javascript on your
Features BDlead,taxes

A group of friends hit the Cubana Lounge in Port Harcourt for Thank God It’s Friday (TGIF). Hours later and a few bottles of Moet and Ciroc gulped, the bill is settled. Five percent of the total amount, as of 2019, was remitted as Value Added Tax (VAT) to the Federal Government. This was subsequently shared among the three tiers of government. That year (2019), N150.24billion worth of alcohol was consumed in Nigeria and VAT amounted to N7.5billion.

In Kano, Jigawa, Yobe, Zamfara, or any of the 12 Sharia states in Nigeria, those alcoholic drinks are frequently confiscated when found and destroyed. But, it doesn’t stop them from sharing in the revenue that accrues from the same alcoholic beverages sold elsewhere in Nigeria.

BusinessDay’s analysis of a range of datasets has shown, for perhaps the first time, that the Sharia states are allocated 30.26 percent of revenue from alcohol sold all over Nigeria, whereas they account for as expected, a meagre 2.92 percent of consumption. In many cases, Sharia states got more revenue than non-Sharia states where alcohol was actually sold and consumed.

“People are benefitting from what they consider to be illegal,” said Emmanuel Ijewere, who in 1991 was chairman of the committee set up by the military regime of Ibrahim Babaginda to conceptualize the introduction of VAT in Nigeria.

Ijewere told BusinessDay his committee had recommended that VAT, which was to replace sales tax, be aggregated every month then each state given its own money, less 5 percent as administrative cost. However, politicians within the regime scuttled the proposal.

“The idea of VAT was to replace sales tax in states,” said Ijewere and, “any aspect that is illegalized, the tax will not be collected for those and the state can’t benefit from it.” 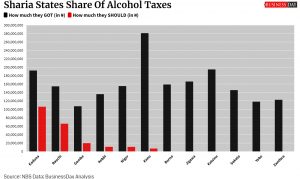 However, for Shamsudeen Yusuf, an Islamic Law lecturer at the Al-Qalam University in Katsina, sharing money from gambling or alcohol is allowed since it is a national allocation by virtue of being part of ‘One Nigeria’. But, the Muslim state should not directly collect that tax or even allow that investment to take place inside its state.

Islam forbids alcohol because it can distort the mental capability of a person, and for 12 states in Nigeria where Sharia law is in place, keeping alcohol out of their domain has been religiously enforced.

Two main data sets were employed for analysis; the Federation Account Allocation Committee (FAAC) disbursement reports for 2019 and the Consumption-Expenditure Pattern in Nigeria report for 2019, published in May 2020, both from the National Bureau of Statistics (NBS). The detailed methodology is presented later in the article.

It does not matter how much alcohol is destroyed in Kano, or any of the other Sharia states; their revenue is guaranteed. As long as consumers in the other 24 states (and FCT) keep gulping gin, beer, or vodka non-stop, taxes will drop into government coffers faster than merry-seekers can refill their cups.

“Alcohol is prohibited in Islam, so there should be no taxes from it since it is haram, that is, prohibited,” said Iysa Bello, a professor of Islamic Law.

“Whatever is haram, whatever accrues from it will be haram too,” emphasized Bello, who is head, Department of Common and Islamic Law, Osun State University.

To demonstrate how prohibited alcohol is, in November 2020, the Kano state government destroyed thousands of beer bottles valued at over N200 million. In that ceremony, the government emphasized that consumption of beer in all parts of the state is banned.

A year earlier, Kano received N280million as its share of taxes accruing from alcohol in Nigeria, more than the N200million worth of alcohol it destroyed at once.

A distributor, John Simon, told Punch in an interview that he lost N35million because of what the Kano state government did. “Where will I source the money to continue selling beer?” he said.

Kano, like other Sharia states, is guaranteed hundreds of millions of naira by a revenue-sharing formula indifferent to whether the income source is illegal based on religious practices or local laws. Though bought, consumed, and taxed elsewhere, states that ban these goods still get their cut, in many cases, even more than those responsible for the sales.

Assuming each state received all the taxes charged on alcohol consumed without sharing a kobo with the federal government. This, for example, means Kano would have got N6.7million in 2019, from the 5 percent tax charged on the N134million worth of drinks it is estimated the state consumed. Instead, it got N280million from the national pool of VAT on alcohol, 42 times more than what it would have earned.

Conversely, even though Anambra consumed N13.5billion worth of alcohol in the same year, it ended up with N153million in VAT on alcohol. If Anambra were to receive its alcohol VAT directly, the state would have pocketed N678million; more than four times what it ended up with. 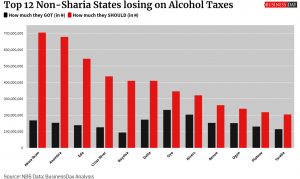 It gets even more interesting. The Sharia states of Borno, Jigawa, Katsina, Sokoto, Yobe, and Zamfara consumed zero naira worth of alcohol, according to NBS data.

Yet, each state not only benefited from VAT accruing from alcohol sales across Nigeria but also in some cases, got more revenue than states where billions of naira worth of alcohol were consumed.

For instance, while Borno was not captured at all by the NBS consumption expenditure report, because “security issues prevented collecting a representative sample,” by getting 2.49 percent of VAT allocations for 2019, its share from alcohol sold that year would be N158million. Whereas, it would have been zero revenue if the principle of earning by sales were to truly apply.

Zamfara, the birthplace of Sharia in Nigeria, with its revenue of N122million from alcohol taxes got more than Bayelsa, where N8.1billion worth of alcohol was consumed but the state ended up with N93million in revenue, even when it could have earned four times more (N409million) directly.

The Sharia states have for 22 years since they adopted that law, been bingeing heavily on alcohol taxes, even when the intoxicating substance is banned from being sold in their domains. When found, alcohol consignments are destroyed. Loss of revenue is the least of worries for those caught during such operations by Hisbah; the religious police.

However, minute as it may be, a portion of state revenue used to pay salaries of the Hisbah officials, and other social amenities they enjoy like the rest of society, come from revenue accruing from alcohol taxes.

Piecing the data together

Getting data was always tricky, and for years, it was a mystery if and what Nigeria’s Sharia states benefited from banned goods such as alcohol. Finding what each state earned from VAT, one of the main variables, was easy. This was to be calculated as a percentage of alcohol consumption, which was the elusive part.

In Nigeria, Value Added Tax was first introduced in 1993. Though the current VAT rate became effective in February 2020, this article uses data for 2019, hence, calculates VAT based on 5 percent, the previous rate.

VAT is centrally collected ‘on behalf’ of all the states in Nigeria, and shared monthly based on a formula that gives the Federal Government 15 percent, States share 50 percent and Local Governments share the balance of 35 percent.

Two main data sets are employed; the Federation Account Allocation Committee (FAAC) disbursement reports for 2019 and the Consumption-Expenditure Pattern in Nigeria report published in May 2020, both from the National Bureau of Statistics (NBS).

The FAAC reports, analyzed for every month in 2019, showed how much each state got as VAT and the corresponding percentage. Also, disbursements disaggregated by Local Government Areas were summed in giving a total view of disbursements to each State.

The Consumption-Expenditure report, on the other hand, gave a first-of-its-kind insight into how much Nigerians spend on different goods. What they spent on alcohol was used to determine the value for VAT on alcohol.

Subsequently, each state’s percentage share of total VAT allocation was plugged into the alcohol VAT value to determine what each state was getting from alcohol sales.

If all that was hopefully, not fuzzy, complete data sets can also be viewed here.

How does it end?

Ishaq Akintola, a professor of Islamic Eschatology and founder, Muslim Rights Concern (MURIC), usually very vocal on Islamic topics in Nigeria, declined comment on whether or not it is appropriate for Sharia states to benefit from alcohol taxes.

This is because “there is no Sharia in the southwest, the Christians don’t allow us to practice our Allah-given fundamental human rights, so we don’t know what obtains anywhere else”.

He said only Islamic scholars from states where Sharia is being practiced can comment on it. 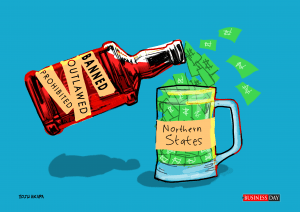 But, is it possible for Sharia states to indicate they do not want alcohol and other forbidden taxes included in what is shared with them monthly?

Yusuf, at the Al-Qalam University, reiterated that to the extent it is national allocation, Sharia states could accept alcohol taxes. For Kano to share its revenue with Lagos for instance, but not collect from Lagos (say, because of alcohol), it will be injustice, he said.

On the other hand, Bello, who has taught Islamic law for decades, sighed deeply and responded, “It is possible for the state to do that (i.e. reject alcohol taxes), and an Islamic state should actually do that. But if the Federal Government is going to agree is another thing. Even if they agree, executing is another thing.”

Who will take the first step to redress what could be an injustice, but certainly a moral dilemma in Nigeria’s VAT sharing, is yet to be seen. Appropriateness of the general revenue-sharing methodology is yet another story.

Enabling dreams with First Bank’s ‘December is a vybe’

Hassles of obtaining loans in Nigeria and the Branch solution