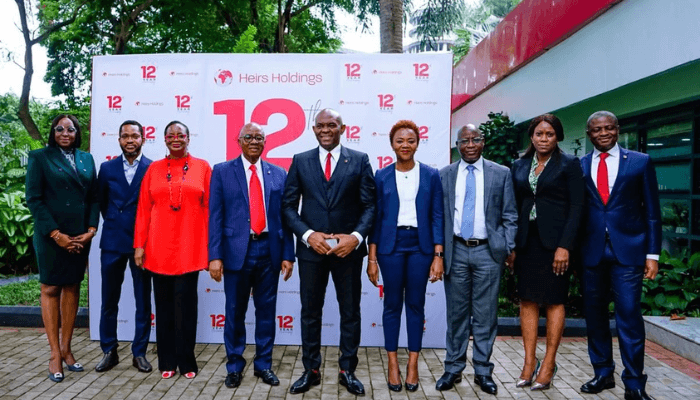 Henry Wadsworth Longfellow, American poet, said: “The heights by great men reached and kept were not attained by sudden flight, but they, while their companions slept, were toiling upward in the night.”

In the same vein, Mahatma Gandhi, Indian lawyer and activist, who revolutionalised India, in one of his numerous quotes, said: “Man becomes great exactly in the degree in which he works for the welfare of his fellow-men.”

Tony Elumelu, Nigeria’s foremost entrepreneur and philanthropist, embodies these two quotes and both typify the great work that he has done in the last 12 years, when he founded Heirs Holdings.

Not all that started out with Elumelu in the same career are where he is today, which brings home Longfellow’s observation that the heights by great men (Elumelu inclusive) reached and kept was not by sudden flight, but a rigorous effort (“toiling upward in the night”).

Moreover, analysing Mahatma Gandhi’s quote as it applies to Tony Elumelu, shows that in the last 12 years since the birth of Heirs Holdings, he has consistently worked “for the welfare of his fellow-men.”

Last week, while addressing stakeholders at the celebration of the 12th anniversary of Heirs Holdings, the Group Chairman, Tony Elumelu, had called to remembrance the establishment’s consistent successful journey over these years.

He looked back when the dream was hatched 12 years ago, the achievements so far, and the projections ahead. He noted that within the short period of time, so much has been accomplished, “and so much more to do!”

According to him, “Our 12th anniversary is a moment for us all to look back and to look forward; to celebrate, to take stock, to learn and redouble; and yes, a time to thank and to acknowledge that we would not have accomplished our dreams without our wonderful HH People.”

“Let me thank God, my family, you, the HH People, and all our supporters. Almost everything we wanted to accomplish in our first ten years, we have accomplished,” he further said.

He recalled that having a good dream and envisioning great things are not enough without execution, noting that “Anyone can dream – execution, institutionalisation, patience, persistence, these are the hallmarks of our achievement; our success separates us from many. We appreciate luck, but we create opportunity, and opportunity that leads to results, milestones, value – tangible and intangible.

“As we are now well into our second decade, let me highlight and celebrate our HH People; both past and present, those that have helped us at Heirs Holdings to execute our vision, despite the often challenging operating environment we find ourselves in.”

The Group Chairman also said: “I want to commend all subsidiary and investee companies associated with Heirs Holdings, for making HH’s vision a reality, without them, we would not have been able to accomplish what we have achieved.

“And as I look forward in our journey and lead us into the future, I am more encouraged, to be even more audacious and bolder than I ever was, because of you, our HH People.”

Tracing the Group’s journey, Elumelu said: “In the beginning, we had shared visions, for business and for Africa. In business we have done well, but more important is the impact we are making every day in Nigeria, and Africa, as well as our growing influence across the globe.

“What we do at the Tony Elumelu Foundation, which all of you support, directly and indirectly, is transforming lives and giving hope. When I listen to our young African men and women tell how their lives have improved as a result of the work of the Foundation, I feel even prouder of HH People and how we are collectively transforming Africa.”

According to him, “Nothing gives me greater happiness, greater excitement, and a greater sense of fulfillment than seeing the faces of these young men and women, from our continent, that have been enabled and empowered.

“So, on behalf of aspiring young African entrepreneurs and on behalf of my family, I say thank you to all of you, for making the past 12 years significantly impactful. We must not relent in our vision to improve lives and transform the African continent through living our philosophy of Africapitalism and our commitment to long-term investment and sustainable businesses. As always, let us commit again to our values of Excellence, Enterprise, and Execution.”

It all began in 2010, when, on completing his 10-year term stewardship as the chief executive officer (CEO) of the United Bank for Africa (UBA), Elumelu announced the establishment of Heirs Holdings (HH) and the Tony Elumelu Foundation (TEF) to drive private investment and champion entrepreneurship across Africa.

By 2011, Heirs Holdings identified its first strategic investment opportunity, acquiring a controlling stake in Transcorp, Nigeria’s largest listed conglomerate. Transcorp, which, despite an attractive portfolio spanning the Nigerian economy, including the iconic Transcorp Hilton Hotel in Abuja, and a loyal shareholder base of over 300,000, had serially underperformed. But benefiting from HH’s operational skills and turn around expertise, Transcorp would blossom as a platform to execute investments in energy, hospitality, and agriculture.

In that year also, The Tony Elumelu Foundation launched the Tony & Awele Elumelu Prize, an award that recognised and rewarded 130 students from 16 universities across Nigeria and three other West African universities.

It was the year that Elumelu first introduced the term “Africapitalism,” his belief that Africa’s private sector can and must play a leading role in the continent’s development, seeking both economic and social returns.

It was also in the same year that Transcorp Ughelli Power was named as the preferred bidder for Ughelli Power Plc, the largest electric power plant in Nigeria, under the privatisation programme of the Federal Government of Nigeria.

Heirs Holdings invested in 51percent of Seadrill Nigeria Limited, a deep-water drilling contractor for the petroleum industry, furthering the strategic intent of identifying opportunities across the oil and gas value chain.

“Heirs Holdings invested in and became the second largest shareholder in NASD OTC, creating an over the counter trading facility, to act as a platform for small company growth.”

A statement from the Group disclosed that “Africa Prudential acquired UAC Registrars Limited, the largest conglomerate registrar in Nigeria.

“GIIN (The Global Impact Investing Network) appointed Heirs Holdings to its board, as the first African board member.” Africa Prudential was also granted the prestigious International Quality Crown Award in the UK, in recognition of its commitment to quality, leadership and innovation.

Transcorp in 2014 was awarded ‘The Most Compliant Listed Firm Award’ by the Nigerian Stock Exchange.

Within a year of acquisition, Transcorp Power delivered a 306percent increase in the available capacity of Transcorp Power Plant (from 160MW to 610MW), contributing 13percent of power generation to the Nigerian national grid.

In that year, Transcorp Hotels listed on the Nigerian Stock Exchange, and Elumelu was appointed the Chairman of the UBA (United Bank for Africa Plc) Group Board.

In 2015, the Tony Elumelu Foundation launched its flagship Entrepreneurship Programme committing US $100 million to identify, train, mentor and fund 10,000 African entrepreneurs over 10 years, across 54 African countries. The Programme has empowered over 9,000 entrepreneurs across Africa.

In that same year, in a landmark transaction, United Capital raised $250 million fresh capital for Orion Group in one of the largest syndicated transactions structured by an African investment banking institution.

In 2016, United Capital led a N9 billion Bond Issuance for Forte Oil Plc; the first bond issued by an entity in the Nigerian downstream oil and gas sector.

The Tony Elumelu Foundation partners with the International Committee of the Red Cross (ICRC) to empower 200 entrepreneurs from Nigeria’s North East and Niger Delta communities.

Within four years of acquisition, Transcorp Power surpassed the five-year performance target of 670MW available capacity set by the Bureau of Public Enterprises.

Heirs Holdings in 2019 won the Great Place to Work award for the ‘Best in Leadership’ Category.

The United Nations Development Programme (UNDP) signed a ground-breaking partnership with the Tony Elumelu Foundation in Niamey, Niger to empower 100,000 additional entrepreneurs in rural, underserved communities across the continent over 10 years.

The Tony Elumelu Foundation entered into a US $5million partnership agreement with the African Development Bank, to empower 1,000 young entrepreneurs in Africa with training, mentorship and funding.

The Tony Elumelu Foundation also received the YouWIN! Connect Award of Excellence at the first edition of the YouWIN! Connect Enterprise Education Book and Awards, an initiative by the Federal Government of Nigeria to empower young Nigerian entrepreneurs.

The Nigerian Senate Committee on Power commended Transcorp Power Limited for meeting the privatisation performance targets set for operators in the sector.

TIME named Elumelu, in the 2020 TIME100, the annual list of the 100 most influential people in the world. Elumelu was recognised for his track record of business turnaround and value creation, and economic empowerment of young Africans

HH also successfully acquired OML17 from Shell, TOTAL and ENI in the largest oil and gas transaction in Africa for the year 2020. OML 17 has a 2P gross reserve of 1.2 billion barrels of oil equivalent.

From the Group’s trajectory in the last twelve years, it can safely be likened to a grain of mustard seed that has, over the years, blossomed into a huge tree with flourishing branches.