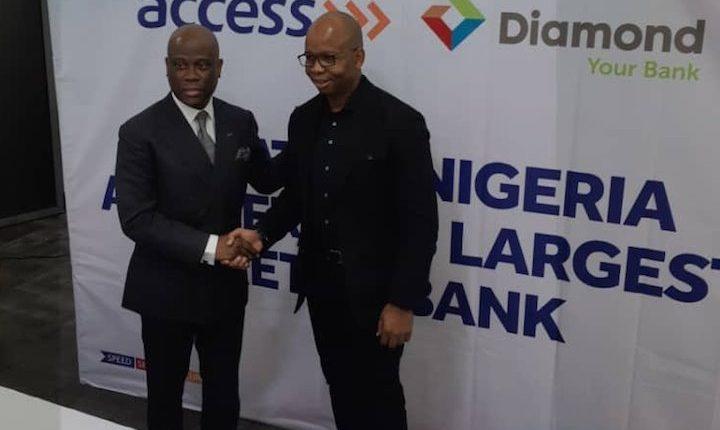 Tier-one lender, Access Bank plc, and mid-tier Diamond Bank plc have successfully completed the process leading to final completion of the merger deal between the two lenders to form Africa’s largest retail bank by customer base.

Access Bank, in a statement on the Nigerian Stock Exchange (NSE) website, Tuesday, said it obtained a court sanction of the deal which was sequel to the final approval by the Central Bank of Nigeria (CBN) and the Securities and Exchange Commission (SEC) on the agreement.
The new entity, which is expected to fully integrate organisation and processes by April 1, 2019, would retain Access Bank as its name with Diamond Bank’s logo. It will span three continents, 12 countries with 29 million clients.

The two banks announced their merger plans in December 2018 following the signing of the Memorandum of Agreement and announcement of headline terms which valued Diamond Bank at approximately $200 million.

As at the close of trading at the Lagos bourse on Tuesday, Access Bank’s shares gained 1.71 percent to close at N5.95, while those of Diamond Bank shed 1.63 percent to N2.42. This indicates that over 20 percent has been wiped off Access Bank’s market value since the formal announcement of the deal on December 17, while Diamond Bank has jumped more than 154 percent.

Although Diamond Bank is yet to release its results for the 2018 financial year, Access Bank results show it grew profit for the year by 58 percent buoyed by gains on investment securities and lower income tax expense.

Retained earnings surged 37 percent to N115.6 billion in 2018 as against N113.4 billion retained as capital in the previous year.

Access Bank realised N96 billion as net gains from trading investment securities as against a loss of N33.4 billion recorded in 2017. Also, the tier-one bank recorded a decline in its income tax expense to N8.21 billion in 2018, from N18.08 billion paid in the previous year.
Gross earnings surged to N528.75 billion in the review year, representing a 15 percent increase from N459.08 billion garnered in the corresponding period of 2017, while net interest income rose 6 percent to N173.58 billion.

Herbert Wigwe, CEO of Access Bank, had said the bank would leverage on its strong track record of acquisition and integration, noting that the two banks have complementary operations and similar values, and a merger with Diamond Bank, with its leadership in digital and mobile-led retail banking, could accelerate Access Bank’s strategy as a significant corporate and retail bank in Nigeria and a pan-African financial services champion.

Diamond Bank’s chief executive, Uzoma Dozie, said the proposed combination with Access Bank would create one of Africa’s leading financial institutions, noting that there is a clear strategic rationale for the proposed merger and strong complementary between the two institutions.