Tightened borders and shift in tastes among Nigerians ramped up patronage of palm/vegetable oil, plastic packaging and poultry products in 2019, forcing the producers to lift year-on-year job numbers in the manufacturing sector by 25 percent.

Total jobs created by manufacturers in 2019 were 22,729 as against 18,203 reported in 2018, representing a 25 percent increase year-on-year, the Manufacturers Association of Nigeria (MAN) notes in a report sent to BusinessDay.

Out of these jobs, the plastics industry, especially packaging companies, posted 4,207 new jobs (18.5%). Food and beverages, led by the vegetable/palm oil and poultry segments, trailed, reporting 3,697 fresh employment (16.2%) in 2019.

Food/beverages and plastics sub-sectors posted the highest job numbers in 2019, though the former created most jobs in the second half of the year (21% of the total jobs) than any other industry, according to MAN. This is an indication that the sub-sectors are seeing new opportunities in the economy.

“The issue of border closure favoured some manufacturers and disfavoured others. The vegetable oil companies and those in poultry were among those favoured,” Olusegun Osidipe, director of Economics and Statistics at MAN, who prepared the report, told BusinessDay.

“Border closure in August had a spiral effect among them, and it ushered in the festive season when patronage was usually high. Due to shortage of imported items, many Nigerians patronised the companies. Many of the companies struggled to meet demands and had to expand and engage more hands due to the increased patronage,” he said. 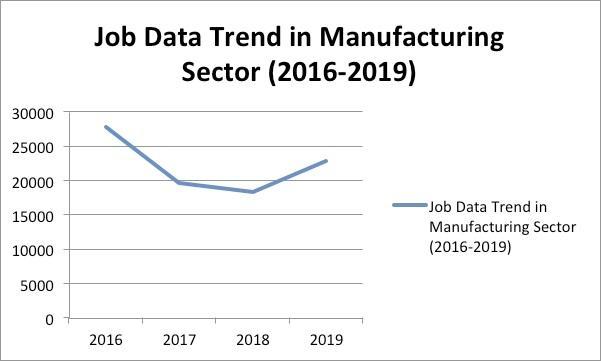 Firms that benefitted from the tightened borders included PZ Wilmar, De-United Foods, Okomu and Presco, BusinessDay gathers. A senior manager of a vegetable oil producer, who pleaded anonymity, confirmed that his company expanded in 2019 due to tightened borders, but added that inability to clear goods early at the ports due to congestion prevented the company from creating more jobs.

The Federal Government shut Nigeria’s borders with Benin Republic in August 2019 to curb smuggling of rice and petrol. This attracted internal and external opposition, as neighbouring countries said the decision was taken unilaterally. However, Nigeria’s poultry farmers said the border closure favoured them, forcing them to patronise local feed-producing companies and pushing Nigerian consumers to buy local poultry products.

“The demand for local poultry products has increased quite much since the border closure. Buyers are visiting our farms daily to make orders which we have not experienced before,” Onallo Akpan, director-general of Poultry Association of Nigeria (PAN), told BusinessDay in October 2019.

“We have sold all our boilers and have restocked for December. Lots of farmers are now expanding their production to meet up with demand, especially in December,” Akpan further said.

Manufacturers in the plastics industry attributed increase in jobs in the sub-sector to shift in lifestyle.

“What we are seeing is that more Nigerians prefer to buy food in plastic packs rather than eat in open places. Even in rural communities, the use of plastics is becoming increasingly popular,” a plastic manufacturer said.

Euromonitor International, a research firm, said in its November 2019 report that the packaging industry growth was fuelled by modern retail stores springing up across the country.
It said open markets, kiosks and independent small grocers were the leading distribution channels for packaged food in Nigeria, and together dominate sales.

“Modern grocery retailers are seeing a strong growth in share, with convenience stores, supermarkets and hypermarkets all expanding in number,” Euromonitor International said.
Nigeria’s unemployment rate has worsened since 2014, rising from 6.75 percent to 23.1 percent in the third quarter of 2018. The National Bureau of Statistics (NBS) has not released job numbers for nearly two years, forcing analysts to speculate. The outbreak of Covid-19 is likely to worsen general unemployment, with the Lagos Chamber of Commerce and Industry (LCCI) projecting that cost-cutting measures adopted by firms today might see unemployment rate surge to 40-45 percent by end of 2020. 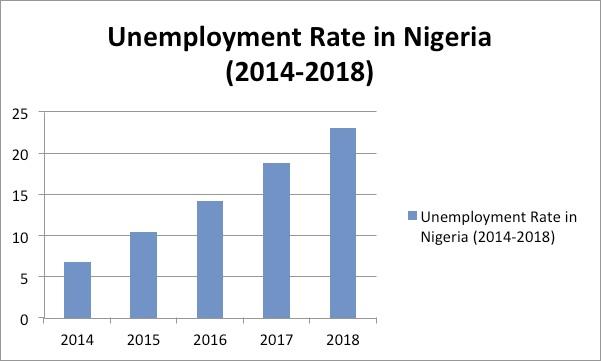 The already-stressed Nigerian economy suffers from high poverty rate with almost 50 percent of the population in extreme poverty. Inflation rate is rising, reaching 12.40 percent in June 2020, meaning that Nigerians are spending more on buying food and other necessities.
Jobs have been on the decline in the manufacturing sector since 2016, when 27,749 jobs were created by MAN members. The number fell to 22,729 in 2019. Job numbers will be worse in 2020, as many manufacturers are not open or are scaling down production owing to Covid-19, MAN said.

“Many companies are not in production today,” said Ambrose Oruche, acting director-general of MAN. “There are high job losses already and nothing much will happen until we are back to normal,” he further said.