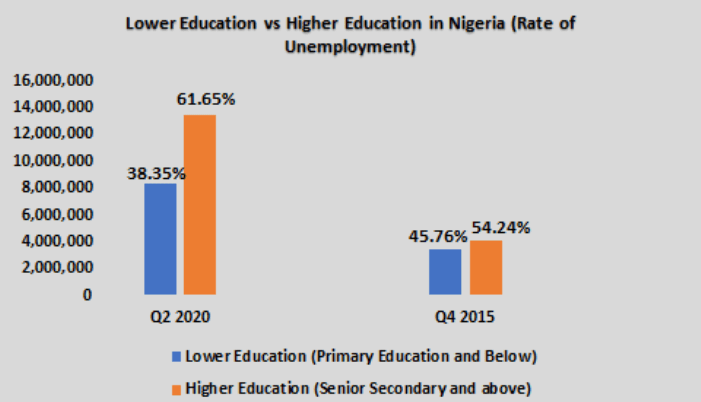 Ade Abass spent a fortune funding his only son Tunde’s university education. He was not that accomplished academically and wanted to give Tunde a solid background that would earn him a well-paying white-collar job.

It is been six years since Tunde graduated from one of Nigeria’s top private universities and the dream of that white-collar job has not materialised. Instead, Tunde, now 30, works in a small supermarket owned by his father.

Taking orders for soft drinks and recording the amount of sales per day is hardly the future Abass envisioned for his son or even Tunde’s plan as well.

“There was no need to pay exorbitantly to see him through university if he was going to end up as my assistant,” Abass says.

His former assistant, the person Tunde now works with, has an incomplete secondary education.

Tunde retains hope of finding a better job and has not stopped his frequent job applications.

Tunde is not the only one waiting to land a job that suits his academic qualification. His plight, along with those of other educated Nigerians, shows that even the most academically qualified people are not guaranteed of jobs in Nigeria, where some 21.8 million people are without jobs and a further 22.9 million are underemployed.

The struggle by educated Nigerians to find jobs marks a departure from an era when a university degree was always enough to land a good job.

These days, the likelihood that you have a job is lower if you have gone to university. This claim can be backed by data published Friday by the National Bureau of Statistics (NBS).

The data show that in the second quarter of 2020, Nigerians with university first degrees and higher national diplomas accounted for the highest number of unemployed people (40.9 percent) after those with only primary education, who account for 46.2 percent of the total unemployed persons.

Meanwhile, Nigerians with vocational skills, which require little or no formal education, had the lowest rate of unemployment at 17.9 percent.

While the numbers imply that formal education no longer provides the assurance of getting a job in Nigeria, it also suggests that vocational skills deserve more attention if Nigeria is to reduce its unemployment rate.

That is, however, hard to take for parents striving to put their children through school, students extending themselves to get a degree, and the government seeking to build an economy with a productive workforce.

People whose highest form of education was junior secondary accounted for 38 percent of the total number of unemployed persons while those with post-secondary education accounted for 62 percent.

Even the most academically qualified Nigerian workers are struggling with unemployment. The same NBS data show that unemployment among doctorate degree holders was at an all-time high of 23.3 percent in the second quarter of 2020.

What that means is that of the 76,000 doctorate degree holders in the country, as many as 20,000 were without jobs.

That doubles the 10,000 unemployed doctorate degree holders in the third quarter of 2018, which was the last time the NBS published unemployment data.

These numbers imply that education no longer provides the assurance of getting a job in Nigeria.

Bongo Adi, a PhD holder, who is also a senior lecturer at the Pan Atlantic University, refutes the statistics for unemployed PhD holders but admits that unemployment is rampant among educated Nigerians.

“It is hard to believe that so many PhD holders are without jobs; the only explanation for that is that perhaps they are taking a break from work to focus on their studies, which could be very demanding,” Adi said. “Other than that, there is a shortage of PhD holders in the academia, which contradicts data suggesting PhD holders are not able to find jobs.”

The number of unemployed PhD holders may be contestable; however, what is certain is that Nigeria is reeling from a lack of sufficient formal jobs to accommodate educated Nigerians.

Nigeria needs to create at least 3.3 million jobs per annum to cater for new labour market entrants, according to estimates by the Nigerian Economic Summit Group (NESG), a private sector think-tank.

That is impossible without the private sector, according to economists.

“The government needs to create an enabling environment for private businesses to thrive since they are also the biggest employers of labour, it’s the only way to reduce unemployment,” said Ayodeji Ebo, an economist and managing director of Afrinvest Securities Limited.

When not contracting, the economy has grown at a tepid 2 percent rate compared to average population growth rate of 2.6 percent. That has led to five straight quarters of negative GDP per capita growth, an indication the economy is not growing fast enough to create jobs.

The last time Nigeria had a positive per capita GDP was in 2014, as the economy has struggled since a lengthy collapse in global oil prices that began in mid-2014.

“The government needs to double down on policies that help the private sector to create sufficient jobs,” said Omotola Abimbola, an analyst at Lagos-based investment bank, Chapel Hill Denham.

Nigeria’s young and growing population heaps more pressure on the economy as there are too many people chasing too few jobs.

While Nigeria’s labour force grew by nearly 4 percent between 2010 and 2017, jobs grew at a rate of 1.6 percent, according to the latest job creation report by the NBS.

Another reason why Nigeria has so many educated and jobless people is that there is a mismatch between the skills that workers have and the skills needed in the jobs available.

This is often attributed to the poor alignment between labour market needs and the curriculum the education system teaches. There is a wide gap between theory and practice in universities, such that it becomes difficult to apply taught courses to real-world issues.

To solve the unemployment crisis, the Federal Government started the N-Power programme to empower young graduates by providing them with short-term job opportunities in agriculture, schools, health centres and tax administration departments. The programme already has 200,000 beneficiaries and aims to cater to 300,000 more at completion.

The programme is, however, too little to matter, according to experts.