Nigeria’s gas flare commercialisation programme is steadily progressing towards completion as two hundred and five applications have been deemed qualified to participate in the next stage of the programme where they would submit proposals.

Folasade Yemi-Esan, permanent secretary, Ministry of Petroleum Resources, conveyed the Ministry’s approval in her supervisory capacity over the affairs of the Ministry following the successful completion of the evaluation exercise which was carried out from 17th – 25th June, 2019 in Lagos by the NGFCP Proposal Evaluation Committee (PEC).

This means that the applicants have only two more hurdles to surmount – send in proposals and satisfy an evaluation committee of the viability of their projects before selection as preferred bidders- before being awarded the right to sell gas, oil companies routinely flare in the Niger Delta. 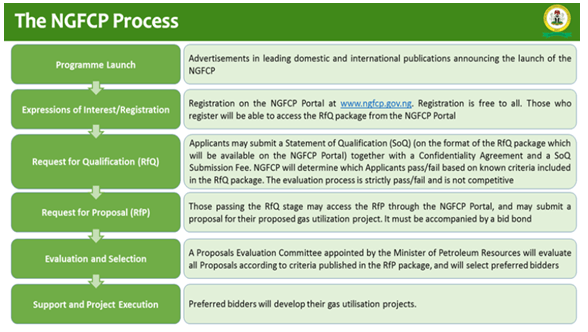 The SteerCo was expanded to accommodate other agencies of Government as well as MPR as the NGFCP moves into the implementation phase. The new agencies are – The Ministry of Finance, Ministry of Environment and the Petroleum Technology Development Fund (PTDF).  Premised on that, the committee has now changed from Ministerial to Inter-Ministerial Steering Committee.

Over 850 interested parties registered their interest in the NGFCP while 238 Applicants submitted Statement of Qualification (SOQs) in response to the Request for Qualification (RfQ) published by the Department of Petroleum Resources (DPR).

A total of 238 SOQ documents were evaluated in accordance with the provisions of applicable Regulations, Guidelines, Standard DPR Practices for bid evaluation, and were adjudged either a ‘Pass’ or ‘Fail’ status. Following a rigorous exercise conducted in line with established protocol and using the Electronic Evaluation Tool (EET), 205 Applicants emerged successful (attaining a ‘pass status’) while the remaining 33 Applicants did not meet the minimum requirements and thus attained ‘fail status

One hundred and seventy eight sites across the Niger Delta currently flare about 888 million cubic feet per day of gas, a volume that could generate 5,000 megawatts of electricity, doubling Nigeria’s power supply and at $3 per million British thermal units, generating revenues of $800 million annually.

The Nigerian Gas Flare Commercialisation Programme (NGFCP) is organising the exercise, conducted under the auspices of the Ministry of Petroleum Resources, and is seeking to inspire 80 separate projects to tap the 888 million cubic feet a day of gas currently wasted.

Approved in 2016 by the Federal Government, the NGFCP seeks to achieve the government’s target of eliminating gas flaring in the Niger Delta by 2020. The Petroleum Act of 1969 and the Flare Gas (Prevention of Waste and Pollution) Regulations 2018, signed in July 2018, provide the basis for the NGFCP. The Petroleum Act empowers the Federal Government to take gas at the flare-free of cost.

According to the NGFCP, Nigeria loses approximately $1 billion of revenue through gas flaring due to its inability to capture and sell flared gas in the country.

So, the programme seeks to stop this waste while creating value to the local economy by creating new 300,000 jobs, producing 600,000 MT of liquefied petroleum gas (LPG) per year and generating 2.5GW of power from new and existing Independent Power Plants (IPPs).

But Nigeria will need $3.5 billion worth of inward investments into gas capture technologies to achieve its flare gas commercialisation targets by 2020.

Under the programme, investors reach an agreement with the producer of the field, build a one-meter flare connector which traps the gas and is used for various purposes either as a fertiliser plant or to generate power for the community.

AN NGCFP Qualified Applicants’ Workshop has been scheduled for 19 August to impart awareness of the regulatory frameworks, incentives and best practices demanded by the government and to test “the appetites” of qualified applicants, according to Andrew Agi, NGFCP director in a letter to a successful applicant.

The leadership shortfall in Africa

Try hard as we might, the system defeats the individual

The candidates who only want to talk to each other…