The scale of corporate deals between privately held businesses and their investors in Nigeria’s oil and gas sector is at the lowest ebb in five years, as transactions hit a low of $123 billion in 2020, a sharp decline compared to a record high of $301 billion recorded in 2018.

This is troubling because oil and gas sector deals such as mergers, acquisitions, asset sales, debt financing, among others, drive investments, improve infrastructure, technical expertise, and grow the economy, thus improving living standards.

According to data from IHS Markit, a London–based energy information resource, Nigeria recorded 82 oil and gas deals last year worth $123 billion, a 69 percent decrease compared to 138 deals valued at $208 billion in 2019. 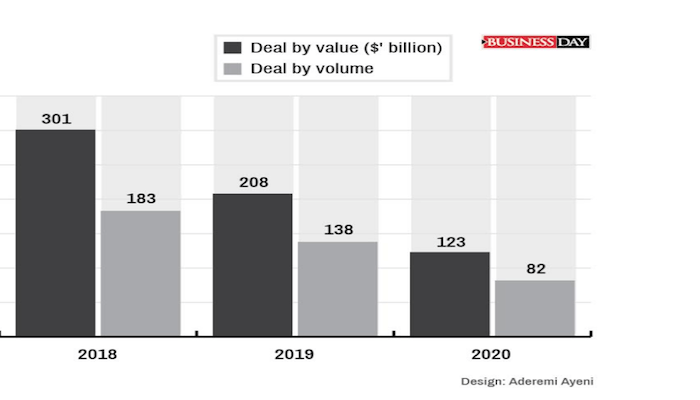 Although investors in Nigeria’s energy sector are not immune to the economic effect of coronavirus and the impact of lower oil prices, which made acquisition financing much harder last year compared to previous years, however, experts say their fortunes are made worse by a regressive fiscal regime and increasing risk profile.

“Nigeria needs to put the right fiscal regime that will make projects more valuable in the midstream and downstream sector which would attract the right kind investment,” Nwakwue said.

Elias & Co, a business law firm with specialty in mergers and acquisitions, said transactions in the energy sector had been less busy lately compared to six years ago.

“It is far from being inactive,” analysts at Elias & Co said in a note.

Mergers and acquisitions in Nigeria’s oil and gas sector have slowed in recent years after an initial surge two years ago when some indigenous players, buoyed by the Federal Government’s initiatives, took advantage of some divestment opportunities by international oil companies operating in the country.

Petrobras concluded the sale of its 50 percent in Petrobras Oil & Gas BV (which held stakes in the Egina and Agbami fields) to Africa Oil at the start of 2020.

Shell completed the sale of its 30 percent interest in OML 17 to Transnational Corporation of Nigeria plc through TNOG Oil and Gas Limited for $533 million at the start of 2021.

Other oil multinationals such as Chevron and Total are involved in divestment programmes, while some have been concluded, others are under litigation.

“We are aware of several deals that are still being negotiated but not announced in the energy sector as well as for electric power distribution companies,” said Gbolahan Elias, Okechukwu Okoro, and Yemisi Falade from Elias & Co.

The law firm said the plans by three IOCs to have acreage divestment programmes, the Federal Government’s bid to sell off unproductive assets, new pipeline projects and possible sale of troubled local oil companies, will create more opportunities for deals in 2021.

Last year, the Federal Government invited bids for 57 marginal fields spread across the land, swamp, and shallow water terrains, where it hopes to raise $500 million.

Data from the National Bureau of Statistics (NBS) further show the poor state of the sector indicating that while the total capital importation last year was $9.68billion, the oil and gas accounted for just 0.55 percent of $53.51 million.