The Rise of Interconnected Mini-Grids 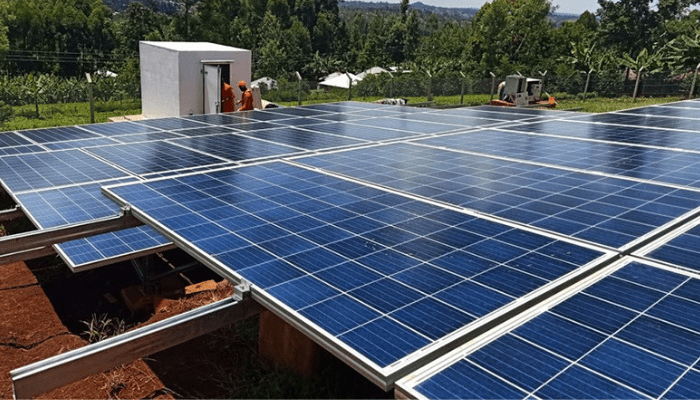 Introduction
The people of Mokoloki in Obafemi Owode LGA in Ogun State must be reliving a level of joy they once felt when their community was initially electrified in the early 80s. Was their joy cut short at any point, one may ask? The simple answer is yes! The community escaped darkness when electricity supply was initially extended to them. This escape then seemed like a thing of the past when days without power turned into months and months turned into years. However, there is now cause to believe again. There is now a cause for economic growth and income generation to be boosted to levels previously unseen. The straightforward reason for this growth is the fact that power has now returned to homes and businesses within the community, albeit in a more sustainable manner.

Nayo Tropical Technology (Nayo Tech), Ibadan Electricity Distribution Company (IBEDC) in collaboration with the community and requisite advisory support from Rocky Mountain Institute (RMI), commissioned a 185 kilowatt (kW) solar mini-grid in February 2020 to restore electricity to the community. What was a town bereft of the usual bustling levels of economic activity has suddenly started to witness reliable power once again. Even the inhabitants of the state capital Abeokuta, which is just 56 kilometres away, may suddenly consider relocation to Mokoloki.

What is an Interconnected Mini-Grid?
Communities like Mokoloki remain in their thousands and are scattered all over the country. Various factors have contributed to the reasons why communities that were once electrified and with high levels of economic activity suddenly became shadows of themselves, prompting high levels of emigration. These factors range from outdated infrastructure to issues around vandalism and theft of cables and other components without replacement. In considering communities in this precarious situation, the Nigerian Electricity Regulatory Commission (NERC), in its 2016 Mini-Grid Regulations, provided for the re-electrification of such communities by mini-grid developers like Nayo Tech in conjunction with distribution companies (DisCos) like IBEDC. In defining an ‘Interconnected Mini-Grid’, the submission is read as a Mini-Grid which is connected to a Distribution Licensee’s network. Section 9(1) of the aforementioned regulatory document further affirms that the Connected Community, the Mini-Grid Developer and the Distribution Licensee are required to sign a Tripartite Contract which then becomes binding for all parties upon approval by NERC. Furthermore, Section 9(2) also infers that a community or a mini-grid developer can notify NERC for considering the deployment of an interconnected mini-grid, with the developer also submitting a proposal to the Distribution Licensee.

How Do Interconnected Mini-Grids Work?
Unlike isolated mini-grids which only require a simple registration process (if under 100kW installed capacity) or a permit (if capacity is between 100kW and 1 megawatt), interconnected mini-grids allow for developers to easily install systems that are over the 100kW threshold without requiring a permit from the regulator. The interconnected mini-grid opportunity is evident across underserved rural and peri-urban locations which have higher energy demand than most off-grid rural locations, where the main focus is isolated mini-grids. This larger and more visible power need, along with prior experience paying for and using grid power, better solidifies a positive business outlook for mini-grids. The other difference is that a developer is allowed to optimise or leverage on some form of already existing infrastructure, if still in redeemable shape, for the deployment of interconnected mini-grids.
While there are no distinct advantages of one over the other for the concerned community, deploying Interconnected mini-grids could promote the application of more holistic, collaborative models given the peculiarities of the Nigerian power situation and environment. With the right approach, this could also portend a much faster route for the sector to achieve scale and ensure long-term benefits for all key stakeholders.

Read Also: Is Your Business Fit For Commercial Solar Power?

Who are the Stakeholders?
Along with relevant government agencies including the Rural Electrification Agency (REA), the Ministry of Environment, state electricity agencies or boards, primary stakeholders for the deployment of an Interconnected mini-grid remain the community, the Mini-Grid developer and the Distribution Licensee or DisCo, in no particular order. The community remains the primary beneficiary, and as such, any agreement should begin with engagements with them. For such projects to be successful, developers and DisCos alike need to engage with and understand their community, and collaborate or liaise successfully with relevant agencies and bodies.

Possible Benefits to Stakeholders
As with the deployment at Mokoloki, similar communities stand to benefit from reduced power spend in comparison with their current levels, as well as a more reliable and sustainable means of power. For DisCos, therein lies an opportunity to reacquire customers and ensure a large reduction in losses accruable from underserved communities. The developers can ensure quick wins as the customers already understand power use and energy spend and as such, have a much more proven ability and willingness to pay than off-grid customers. The opportunity to reduce costs of capital expenditure and build larger capacity systems with the use of the DisCos distribution assets, also ensures that such costs reduction is ultimately passed on to the customer. Cost reductions ensure that tariffs for such installations remain lower in comparison with tariffs from a sole generator or a mix of generator/grid use. Overall, interconnected mini-grids further offer a route to achieving the goals of various social policies of the government, including spurring business and economic growth for MSMEs as well as in combating climate change.

What Stakeholders Must Do
From now on, more programs such as the Interconnected Mini-Grid Accelerated Scheme (IMAS) should be explored. At the same time, Distribution licensees could work with related agencies to collate and share comprehensive information for underserved communities within their franchise areas viable for deployment. In the same regard, lessons learned and other requisite operational information from the operation of interconnected mini-grids should be shared with relevant stakeholders, to support their outlook and decisions. Furthermore, relevant government agencies at all levels should continue to create the enabling environment for the primary stakeholders to leverage on for the deployment of interconnected mini-grids. Collaboration between various stakeholders has been key to birthing the Mokoloki Interconnected Mini-Grid and ensuring that there are many more under development across the country. Such collaborative efforts, if continuously replicated, could help forge clearer pathways for the growth of such deployments and the mini-grid space as a whole.

Conclusion
In concluding, one must commend the continued expansion of the mini-grid sector in Nigeria within the last few years. The growth trajectory has largely been positive, with the 2016 Mini-Grid Regulations mostly seen as one of the more market-friendly regulations specific to the sector. Grants and other funding have also become more available than at any other time. Knowledge transfer, data availability and information sharing could also be better. Therefore, for all stakeholders to jointly ensure that this momentum is sustained, or even surpassed, and the sector gets to scale, quick wins such as the deployment of more interconnected mini-grids should be encouraged. Nigeria, in general, and the mini-grid sector, with the key players, in specific, must be seen to approach the deployment of interconnected mini-grids with the same vigour as the outlook for improving energy access for the over 90 million people who live in totally off-grid communities.