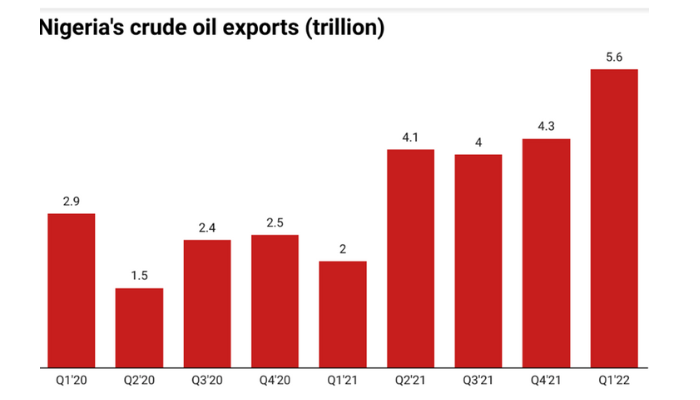 In the first quarter of 2022, Nigeria’s oil and gas sector led in volume and value of imports and exports, accounting for nearly 88 percent of all exported goods and about 30 percent of total imports, according to a new report by the National Bureau of Statistics (NBS).

This pattern of trade largely in a one product, analysts say, feeds dependency on crude oil and does little to encourage exploitation of other commodities which stymies economic growth and development.

The numbers that follow highlight to what extent, the Nigerian economy depends on the oil and gas sector.

Despite the fact that Nigeria has been unable to meet its production quota under the OPEC+ supply pact, rising demand on account of supply outages in Libya and the Russian-Ukraine war is boosting oil demand. Production challenges including crude theft, vandalism and IOCs departure from onshore fields have reduced Nigeria’s output.

₦656 billion
Nigeria sold natural gas worth N656 billion in the first three months of 2022 accounting for 9.24 percent share of total exports. This is a 14.49 percent increase from the 573.8billion realised for Q4, 2021 sales.
Russia’s war with Ukraine, analysts say has triggered increased demand for gas from Nigeria as European countries seek to wean themselves of Russian gas.
However, the country’s inability to liberalise gas pricing for the domestic market and attract new investors for abandoned gas projects limits its ability to extract value from the resource.

₦93.7 billion
According to the NBS report, other petroleum gases valued at 93.7 billion accounted for 1.32 percent share of total exports in the first quarter.

Read also: What Google subsea cable will do for Nigeria’s economy

₦1.5 trillion
Nigeria imported Premium motor spirit (PMS) commonly called petrol to the tune of N1.5 trillion in the first three months of 2022. This accounted for 25.54 percent of the share of total imports into the country within the period.

Nearly half of the total amount spent on petrol imports is borne by the Federal government, a development that eats into resources that ought to be spent building hospitals, roads and schools.

₦293 billion
Kerosene and jet fuel used to power aircraft by gas-turbines engines amounted to N293 billion which was a 4.96 percent share of total imports.