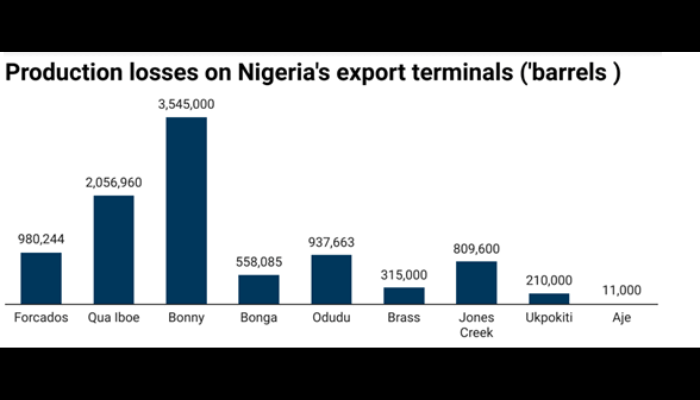 The Nigerian National Petroleum Company (NNPC) Limited and its other major partners lost over $1.068 billion in the month of May arising from production shuts-in, the NNPC has said.

According to the report, they lost 9.4 million barrels of crude oil worth about $1.068 billion, based on May’s average Brent price of $113.34.
For instance, the report noted that the Trans Ramos pipeline which feeds into Nigeria’s Forcados oil export terminal, and the Trans-Niger Pipeline capable of hauling 180,000 barrels a day across Nigeria ceased transporting crude in the month of June.

The link’s capacity is about 15 percent of Nigeria’s most recent average daily output, according to BusinessDay’s calculations.
“Crude oil production at Bonny Terminal has dropped significantly to an average of about 3MBD since the 21st of March 2022 till date. The terminal operator has declared force majeure on all outstanding Bonny programs,” NNPC said concerning Nigeria’s Bonny terminal.
On Jones Creek terminal, NNPC Limited said the Batan Station came down due to malfunctioning Tricon Ex failure and protesting OML 42 workforce.
According to some operators who reluctantly spoke with BusinessDay, oil is no longer stolen at the well-heads, as vandals have become innovative, bypassing the anti-ballistic pipelines to disrupt production.

Indeed, they have raised concerns about the culpability of the nation’s security agencies, noting that barges of oil could not have been stolen and moved on the coastal waters without the collaboration of some powerful Nigerians.
Nigeria’s President Muhammadu Buhari expressed concern last Friday over large-scale crude oil theft, saying it was affecting the country’s revenues “enormously”.

“On your request for a salary review, I wish to urge you to appreciate the revenue constraints presently faced by the government which is caused mainly by the activities of unscrupulous citizens through the theft of our crude oil, a major contributor to our revenue base,” Buhari said.
He instructed security agencies to speedily clamp down on those involved in oil theft in the Niger Delta, adding that Nigeria was also strengthening cooperation with its neighbours to stop criminals siphoning away stolen crude by sea.

“We will not allow a few criminals to have unfettered access to the nation’s oil supply,” Buhari said.
Crude theft poses an existential threat to Nigeria’s oil industry, the local head of Shell has said, resulting in the shutdown of two of its major pipelines.
On August 9, Mele Kyari, the group chief executive officer (GCEO), NNPC Limited, says Nigeria loses $1.9 billion monthly to crude oil theft.
“This has done extensive damage to the environment, and losing $1.9 billion every month is colossal, considering the nature of the global economy at the moment,” Kyari said.

Kyari emphasised that the team needed the support and buy-in of the Delta state government “because stopping this oil theft requires the concerted efforts of the federal, state governments, oil companies, and security agencies”.